“So how do we measure the value of nurses?” she asked a classroom of College of Nursing faculty and staff at the Aug. 12 Grand Rounds.

Finally, after a few people tentatively tossed out some obviously wrong answers, Susan Bonini, EdD, MSN, RN, got it right.

“We really don’t assess nursing value,” said Bonini, coordinator of the Integrated Nursing Pathway Program. “The value of the nurse is rolled into the room and board.”

She’s right. But it’s wrong, according to Jenkin’s and co-presenter Professor John Welton, PhD, RN, FAAN, who has been working on lifting that measurement out of the same category as hospital beds and cafeteria food for three decades.

The pair’s work falls under the umbrella of a larger national charge called the Big Data Science Initiative.

A collaboration with the universities of Kansas and Minnesota, the concept behind the work is to stop seeing nurses as a cost center and to start seeing nurses for the value that they bring to quality outcomes, said Jenkins, specialty director for the iLEAD program.

“We really want to measure nurses as an individual provider of care, and that’s the kind of metrics that we are trying to construct.”

It’s not an easy feat with today’s onslaught of data from numerous sources. “We’re drowning in data, but we’re starving for information, because data systems aren’t standardized,” Jenkins said. 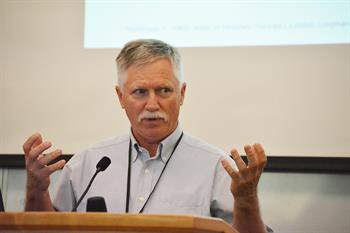 Study looks at nurses in ‘a much different way’

Welton shared the challenges and findings of a study the pair did, along with Marcelo Coca Perraillon, PhD, of the Colorado School of Public Health, focused on nursing value at one pediatric hospital on the West Coast.

“We were able to pull those data out and look at nursing care in a much different way,” Welton said. “The exciting possibility is we are now able to identify each nurse caring for each patient in the data and from that identify and link nursing care with each patient.”

The study showed that analyzing nursing costs at the patient level is feasible and informative, Welton said. The current study was supported by grants from the Agency for Healthcare Research and Quality and the School of Medicine Data to Value (D2V) project.

Welton and team hope to find continued funding for their research. Among other things, they want to conduct a multi-site comparison and link nursing cost outcomes to clinical outcomes.