Like most of her classmates, Emma Bielfeldt struggled to finish her thought as she answered her fellow student’s question. She faltered, tried again and finally gave up, laughing at her inability to speak coherently. It’s hard to think straight when someone is whispering orders in your ear.

Imagine if the voices were always there.

That was what Bielfeldt and her classmates were asked to do during the University of Colorado College of Nursing’s first-ever mass Mental Health First Aid (MHFA) training on Jan. 22. And, like many of the exercises they completed that day, the lesson on living with psychosis was a powerful one.

“I totally see how very confusing and unsettling that could be,” Bielfeldt said during the class debrief of the exercise, which involved one student speaking orders through a rolled up piece of paper as another student asked her questions. “It makes it very hard to be able to concentrate,” she said. “Then there were times when I wanted to respond to the voice and not to the person.” 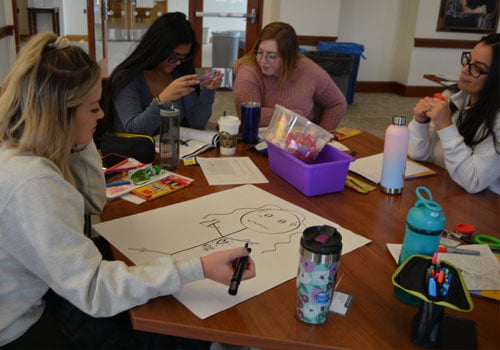 Activities are a large part of the MHFA training. Here, students illustrate signs
and symptoms of anxiety.

With a rash of behavioral health issues from suicidal thoughts to opioid abuse taxing providers across the country, and the nation’s largest healthcare profession increasingly on the front-line, CU Nursing and community partner Centura Health joined forces in the effort.

About 170 first-year undergraduate students embarking on nursing careers were certified during the inaugural training. All CU Anschutz students, faculty and staff can undergo MHFA training, with free sessions held every second Tuesday and fourth Friday of each month.

“As nurses, we need to recognize and respond in a therapeutic way when we see symptoms or concerns related to mental health and substance use issues,” said Tammy Spencer, interim assistant dean of CU Nursing’s undergraduate program.

Aims of the program include inspiring empathy, reducing stigma and teaching people how to defuse a mental health crisis safely using evidence-based steps (much like CPR).

“More and more people I know have struggled with suicidal thoughts. I would have had no idea, until today, how to deal with that.” — Brittany Andrighetti, BSN candidate

“We know that nursing is a high-stress profession,” Becker said. “So being equipped early on with tools in terms of recognizing mental health issues and finding resources for both their patients and themselves is extremely valuable.” 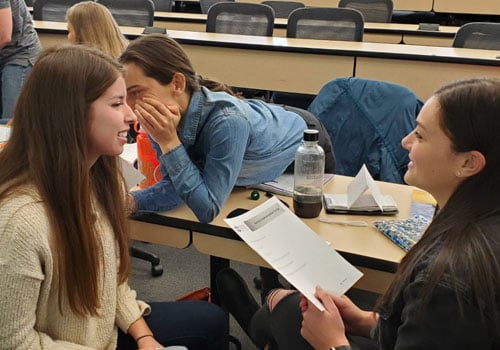 Students take part in a “hearing voices” activity that one instructor said many
people find “unsettling” and “eye-opening.”

“I think it’s smart,” student Brittany Andrighetti said of the newly required training on break from one of the seven classes held across campus. Fourteen volunteer certified instructors from the Anschutz Medical Campus and Centura Health helped make the inaugural training happen.

“I think that we as healthcare providers see someone dealing with mental health illness almost every single day that we’re in practice, but we don’t get a lot of training in it,” said Andrighetti, a certified nursing assistant and CU Nursing BSN candidate. “The more awareness that we have the better providers we are going to be.”

While the subject matter was often intense, such as lessons in suicide prevention, they were important for anyone, especially college students, Andrighetti said.

“There are things I’m learning in here that I would have never thought to ask. Like we talked a lot about suicide prevention, which is a big thing. More and more people I know have struggled with suicidal thoughts. I would have had no idea, until today, how to deal with that.”

With most mental illnesses striking before age 25 and commonly in the early 20s, college students are in a high-risk group, with an estimated third of them suffering from some form of mental illness.

Becker said she is glad to see CU Nursing leading the way in innovatively increasing mental health knowledge among students.

“I think this is very forward-thinking in terms of getting classes trained as a whole versus just offering it individually,” Becker said. “It is a great step.”

The training requirement falls in line with campus- and university-wide initiatives to provide more education to students around mental health recognition and response, Spencer said.

“We were fortunate to find a community partner in Centura Health, who also strongly supported providing this education to nursing students,” Spencer said. “We hope to continue this partnership and bring MHFA training to all of our students when they enter the program.”