Seventeen years before Dr. Martin Luther King, Jr. inspired masses in Washington with his speech, “I Have a Dream,” a young Black woman nicknamed Zippy in Denver was already living her dream. In 1946, ‘Zippy’ Zipporah Parks Hammond became the first Black woman to graduate with a bachelor of science degree from the University of Colorado School of Nursing. She went on to join the war effort as a nurse, tend to minority children with polio, contract tuberculosis, document African American history, raise a family, and become the first minority director of medical records at a hospital in Colorado. Every dream was hard-fought. From all accounts, Zippy accomplished them with grace and dignity.

In the 1940s, most people believed blacks and minorities couldn’t learn and develop skills to succeed. Black people also faced segregation and regular threats of violence.

While the University of Colorado made history by accepting Zipporah into the School of Nursing in 1941, she was the only African American in a class of 30 women. She was barred from living on campus, prevented from studying with white students and denied hands-on learning. Many of her white classmates and teachers were bitter and gave her the cold shoulder. But Zipporah was smart and determined. She didn’t give up.

“Zipporah was so courageous to stand up to the system and do what she knew was right even though the system did not believe she could be a nurse, much less a Negro nurse in the deep South. She did not succumb to the prevailing beliefs of the time. In later years, Zipporah would share these stories with calm assertiveness that did not speak of victimhood but rather strength,” said family friend Reverend Nancy Driver.

“Ask her about her own accomplishments and the trail she blazed, she would likely say, ‘I was pursuing what I loved to do for the benefit of others and the distractions did not matter,’ said her son Darrell Hammond.

Zippy’s history-making graduation from CU in 1946 was catalytic, according to the Colorado of Nurses Association (CNA). She proved by example that “minorities were fully capable of meeting the high standards of a university nursing curriculum,” said Colorado Nurses Association Executive Director and CU Nursing alumna Colleen Casper (MS ‘91, DNP ’11).

Despite extreme prejudice, in 1946, Zipporah joined the Cadet Nurse Corps to serve her country in the war effort. At the time, Rocky Mountain News reporter Lee Casey wrote that out of 1,600 student nurses training in Colorado to serve the Army’s black troops, only one of them was black. That was Zippy.

After graduating college, she worked as a surgical nurse in the operating room at Colorado General Hospital in Denver. She was soon recruited by Dr. John Chenault, the chief of orthopedics at Tuskegee Institute in Alabama to be his chief surgical nurse. While there, she took care of children suffering from polio who could not receive treatment from other hospitals because of the color of their skin. Tuberculosis was running rampant in the nearby community, and after a while, Zipporah contracted the disease. That forced her to return to Colorado to fight the illness at the National Jewish Hospital.

After battling the disease for two years, Zipporah continued to serve others in the medical field by earning her medical records librarian certification at CU in 1951. That led to a rich career of helping other medical professionals, ultimately becoming the first black director of medical records at the now Presbyterian/St. Luke’s Medical Center. In that time, she met her future husband, Sheldon Leroy Hammond, also a TB patient with scarred lungs. In 1956, Zippy resigned from her leadership position to raise two sons – Darrell and Stephen. 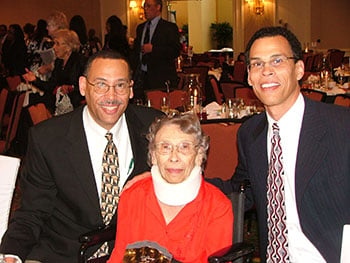 "Zippy" and her sons Darrell and Stephen

Even motherhood couldn’t slow her down. She volunteered for 17 years at the Denver Public Library and documented historical photographs, articles and other works that preserved black history. Despite a modest income, she contributed thousands of dollars to more than two dozen charities in Colorado, including A Gathering Place that serves women, children, and transgender individuals in Denver experiencing poverty or homelessness.

Her son Stephen, who became the family historian, wrote that his mother’s “professional accomplishments were extraordinary considering the time frame in which they occurred: between 1939 and 1991. She opened nursing-education doors that were closed to minorities. She is an inspiration to women and girls having blazed a trail for those that have followed and serves as an example for countless people, young and old, who aspire to serve others.”

It was a life well-lived, full of overcoming obstacles, accomplishing dreams and creating breakthroughs for Blacks. She was presented with the Living Legend Award in March 2009 by her peers of Black women in Denver for making a significant contribution to her community and society.

“You make us walk taller, smile wider, dream bigger,” wrote the nominees. “You change the world with fierce determination, effortless style, unshakeable grace. Thank you for showing us how to fly by flying.”

When she passed away in 2011, The CU College of Nursing Alumni Association presented her posthumously with its inaugural Pathfinders Award.

“Zipporah Parks Hammond’s perseverance in the face of adversity and her dedication to the field of health care, along with the example she set for others as the first African American graduate of the college, led the association to honor her with this award,” wrote Dr. Cynthia Oster, former president of CU Nursing’s Alumni Association, in a letter to her family.

Upon her death, then-president of the University of Colorado Bruce Benson wrote to her family.

“I believe your mother's life and work will serve as an example to our current students and to all CU alumni. She was a pioneer, but she also demonstrated the qualities we hope for in every member of our university community - caring, compassion, competence, and commitment to family and community. We are honored to call her one of the university's own.”

Her sons, in collaboration with the College of Nursing, established a memorial nursing scholarship in her name to help other students overcome financial challenges and to recognize volunteer and public service to those in need.

“She subtly and gracefully broke down barriers. She elevated the status of women not just Black women, by refusing to be held back by societal and institutional roadblocks which existed that made attaining her goal so difficult,” wrote her son Stephen.

While Zippy was quietly determined to do her best in every role she earned, she unquestionably became a role model then and today for all minorities daring to dream big.