Home / News / From UTIs to opioids

University of Colorado College of Nursing professors joined a 1,200-plus gathering of experts from across the country at the 2019 National Nurse Practitioner Symposium in Keystone this weekend, sharing their innovations and clinical knowledge in our Rocky Mountain backyard.

Surrounded by majestic peaks and high-country lakes, the popular NP conference attracts participants for its rigorous content and beautiful surroundings.

Here is a peek at CU Nursing’s presentations during the July 18 to July 21 event.

A mentorship program that began with a phone call has changed the way some CU Nursing students enter the often-intimidating world of clinical rotation.

When Christopher Flom, MS, FNP-C, called Krista Estes, DNP, FNP-C, one day nearly two years ago, confiding in his professor about his struggles transitioning from class to clinic, he suggested a peer mentorship program.

“We jumped on board with the idea,” said Estes, Family Nurse Practitioner specialty director. “Going into clinical rotations is just a whole different beast. This way, students have someone in the trenches with them.”

“We really wanted this mentorship program to zipper right into the curriculum versus feeling like a Velcroed add-on,” Robertson said. “That way, it is actually an integrated experience.”

Students not only welcomed the idea; they took over, volunteering, pairing up, holding potlucks, scheduling speakers and forming their relationships in the field. “We wanted this to be all volunteer, not something that was pressed on them, but something they actually wanted to do,” Estes said.

A survey post-semester with a 90% response rate found that mentees were comfortable asking questions of their mentors and that the program eased their anxieties about their clinical rotations, Estes said.

With three successful semesters behind it, the program will expand this fall to include pairing first-year FNP students with first-year clinical rotation students.

Diabetes study: Explaining the science behind the doctor’s orders can help

Who hasn’t heard that advice? Given the rampant obesity, diabetes and cardiovascular disease rates in this country, it remains a top remedy for much of what ails us.

Yet, it isn’t working.

That was the basis of a pilot study by Assistant Professor Kim Paxton, DNP, who set out to see how educating patients on the science behind the eat-right-and-exercise command might change behaviors.

“If we take the initiative as providers to work with our patients more holistically, incorporate technology and educate them, we can reduce disease burden associated with Type II diabetes,” Paxton said.

Her six-month study involved volunteer pre-diabetic and recently diagnosed diabetic patients who upped their number of office visits for the structured educational program.

Paxton and her staff didn’t just explain the top diets diabetics should follow. They explained certain foods’ inflammatory and glycemic-index effects and how some foods could improve or worsen a disease state.

She and her nurses didn’t just say: Get more exercise. They explained the different types of exercises and their physiological effects related to the disease. They wrote actual “prescriptions” for exercise and made personal trainer referrals. And they worked with patients and their insurance, getting the most holistic care their coverage allowed.

Paxton’s pilot program yielded a 25-30% reduction in pharmaceutical prescriptions, she said. Paxton calls for more studies, particularly given the U.S. Department of Health and Human Services 2018 reimbursement change to a value-based structure.

“Applying nutritional and exercise interventions really can be life changing for patients,” Paxton said. "Spending a little more time with a patient can yield significant results and improve chronic disease.” 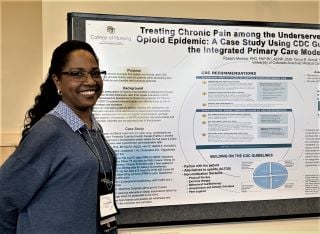 Fueled by a national opioid crisis, which kills more than 130 people a day, the Centers for Disease Control and Prevention issued its “Guidelines for Prescribing Opioids for Chronic Pain” in 2017.

While those guidelines are “phenomenal” for helping front-line providers prevent addiction in their patients, they do not fully address how to treat patients who come in already addicted, said CU Nursing Professor Rosario Medina, PhD.

“We were not educated to deal with this kind of opioid misuse,” said Medina, a family nurse practitioner. “How do we do that and manage their pain, which is valid and real?”

Faced with the issue regularly at her Sheridan Health Services clinic, Medina and Sheridan Psychiatric Nurse Practitioner and Associate Professor of Nursing Tanya Sorrell, PhD, have found that it takes a holistic and multi-disciplinary team approach.

She used a relatively recent patient who showed up in her office after two years in a rehabilitation center on morphine as an example. Releasing him with a three-month supply of the powerful narcotic, his providers told him to seek primary care for his severe pain before the supply ran out.

“And that’s it,” Medina said. “This is what we as primary care providers are being challenged with today.”

Medina knew, if she failed in treating his addiction, the stakes were high. “If I did not manage this, he was going to go onto the street and get heroin, because it’s cheaper, and he doesn’t have to worry about getting a prescription.”

According to the National Institute on Drug Abuse, an estimated 80 percent of people who use heroin first misused prescription opioids.

After explaining preventive overdose therapy and the dangers of mixing the drugs they would administer with street drugs, she and Sorrell assembled a plan. It included medically supervised in-house detox (partly because the man had hypertension) followed by medication-assisted treatment (MAT) to wean him off opioids.

“You can’t ignore the pain, and there are many other methods for dealing with it,” Medina said. “But you have to manage the addiction first.”

At least one in every two U.S. women has had a urinary tract infection (UTI), the single-most common bacterial infection seen in a primary care setting, according to the Centers for Disease Control and Prevention.

“Because people have been treating UTIs with one certain type of antibiotic for a long time, there is tremendous resistance to that particular antibiotic (penicillins),” Weis Malone said. “So it has become a very serious health problem.”

While the Infectious Diseases Society of America recommends Nitrofurantoin as a first-line treatment for many UTIs, a number of providers have never heard of the antibiotic and are still prescribing more-resistant forms, Weis Malone said. “So we are really pushing people to change their practices.”

Early-phase clinical trials are underway for a vaccine that would target patients with recurrent UTIs. Although no conclusive scientific studies exist, some evidence suggests cranberry extract can reduce recurring infections.