Eleven years ago, Erika Vaske was on a two-year waitlist to get into a nursing program. “A lot of my inspiration came from my mom, who has been a nurse’s aid for over 35 years,” she said. For Vaske, the wait was “interminable.” So she chose another path -- changed majors and earned a bachelor’s degree in social work. 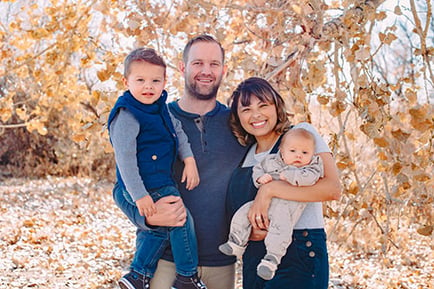 After college, she joined the Army where she was an aviation officer. “It was easier to get into flight school than nursing school,” said Vaske.

She trained in Fort Riley, KS where she met her husband who is also a pilot. She flew Apaches; he flew Kiowas (no competition there!). The couple ended up in Germany where Vaske’s last assignment included commanding soldiers. “I had the opportunity to go to some pretty neat places, see some cool stuff, lead soldiers and work with really great leaders,” said Vaske.

Pregnant with her first child, Vaske hung up her wings and moved to Colorado with her family. “It seemed like a very good spot for us,” she said.

Still determined to pursue a nursing degree, Vaske went back to school when her first-born was four months old. Attending Red Rocks Community College, she obtained the prerequisites to apply to CU College of Nursing. Knowing how competitive nursing programs are, Vaske said, “I was certain I wasn’t going to get into the program.” So, when she received the acceptance email from Amy Sturrock in Student Affairs, “My heart jumped out of my chest!”

For the last two years, Vaske has diligently pursued her degree -- raising a toddler, giving birth to her second child, and working at UC Health in the Intensive Care Unit (ICU). “The resiliency I gained and developed in the military helped with nursing,” she said. “It’s going to be important for us as nurses to be resilient, and to remember that we’re here to provide compassionate care to our patients especially during a pandemic and such a scary time.”

As Vaske prepares to join the nursing workforce, she said she is hoping to work in critical care. “My experiences in ICU showed me that’s where I will thrive, and that’s the plan,” she said.