After 27 years with the University of Colorado working on all four campuses, Senior Vice President and Chief of Staff Leonard Dinegar told a group gathered for the College of Nursing Scholarship Luncheon on Nov. 22 that CU Nursing held a special place in his heart.

That’s because 10 years ago, that heart stopped beating, and a brand-new nursing graduate stepped out of a crowd and saved his life.

That woman, Lindsey Phelps, and the care he received at University Hospital for nine days after collapsing from Sudden Cardiac Death, forever changed Dinegar’s view of the nursing profession. He and his wife created a CU Nursing scholarship in Phelps’ name.

The Lyndsey Phelps Nursing Scholarship went to Anna Robinson, one of over 200 award winners honored along with their donors during the annual event, held this year in the Education 2 North-South Bridge. Dinegar was the guest speaker.

Honoring ‘the amazing things nurses do every day’

That day at Denver International Airport, Dinegar collapsed in front of hundreds of people, but only Phelps took action as the wait for medics began. “She later said I was turning bluer than a Smurf,” Dinegar said of Phelps. “She gave me CPR for over 10 minutes before the paramedics arrived.”

Dinegar was resuscitated several times before he was admitted to the Intensive Care Unit, where he recovered from the ordeal that spares only 5% of its victims, and half of those suffer brain damage.

After his boss at the time, then-CU President Bruce Benson, heard the story, he contacted Phelps’ alma mater in North Carolina, rallied his own friends and donors to raise money to pay off her student-loan debt and presented the young nurse with an award at the next Anschutz Medical Campus commencement.

“The medal was to acknowledge not just what Lindsey did for me, but to share the amazing things nurses do every day,” Dinegar said.

Ten years later, Dinegar still chokes up recalling his near-death experience and the person who saved his life. His emotional and riveting testimony of the difference a nurse made in his life set the stage for students to share how scholarships like the one Dinegar established at CU are impacting them. 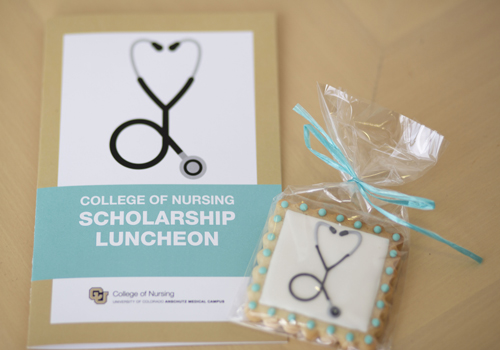 Provencio-Vasquez told the donors that their generosity helps CU Nursing gain and retain the highest-caliber students.

“As our students complete their degrees and enter the healthcare workforce, know that your investments in their future are helping guide them into careers as compassionate caregivers, visionary leaders and innovators in health.”