Home News System to Improve Student Experience, Progression and Tracking Allowed for Rapid Response During Pandemic back to News

Many academic institutions – especially those in the healthcare field – were caught off guard during the coronavirus pandemic. The challenge for the University of Colorado College of Nursing wasn’t just a matter of social distancing and moving classes to remote learning. It was ensuring our students also obtained the clinical hours required by the State Board of Nursing to graduate.

For health care programs that require on the job practical experience, placements became virtually non-existent. Clinics and inpatient facilities where students typically complete their clinical hours shifted their focus to caring for coronavirus patients and suspended training. Consequently, students were in limbo and in jeopardy of not graduating.

New System Made Responding during the Pandemic Easier

Not long ago, this rapid response would have been unheard of and more difficult to accomplish. But a system that was implemented three years ago made it possible to respond more swiftly during the crisis. And, the people behind the system are now being recognized by the university for their vision.

During its 125-year history, the College has grown to include a traditional BS degree, an accelerated nursing degree, 12 advanced practice specialties, doctoral degree programs, and numerous certificate programs. With 1300 students, CU Nursing is a mid to large size program, but in 2017 was operating as a small school.

“Keeping track of students -- how they were progressing as well as clinical placements -- was complicated,” said Associate Dean of Academic Programs Leigh Small, PhD, RN, who arrived at the College in 2016. Dependent on individually-held spreadsheets and key individuals with extensive knowledge about students made it impossible to accurately determine where students were in the programs and to assess when new courses, course sections, faculty, or clinical placements were needed. “We were extremely reactive – manually handling placements,” said Director of the Office of Academic Programs Jodi Cropper. “Time and again, we would be surprised at the last minute that we needed a new section and would have to add faculty or adjunct faculty. We were frequently caught flat-footed.”

Being Reactive Put Pressures on the College

With accreditation looming, it became even more apparent that a change was necessary for future growth. So, they analyzed the needs of the College and began an overhaul of the infrastructure. The current system was customized to each student and dependent on advisors’ extensive knowledge of where each student was in each program. “Systems get ingrained and people are used to what they are used to. They knew the system and were adept at thinking on their feet and addressing shortfalls. And for years it worked,” said Small. Being so reactive put pressures and stress on the College.

They knew there had to be a better way. Initially conducting a review of the processes, they discovered that it wasn’t simply just a software or tracking problem -- moving the system from a spreadsheet to something more automated. “It was much deeper than that,” said Cropper. “We needed to develop a technology-supported structure, figure out a sequential order to our courses, shift to a cohort model for students, and incorporate a series of relational databases integrating numerous software platforms.”

Cropper and Small began tackling this intricate issue. When they uncovered one part, it would lead them to another problem. “We played whack-a-mole. When one issue would pop up, we’d knock it down. Then another would appear. So many parts were inter-related,” said Small. The key was in seeing the bigger picture and realizing that an entire shift in thinking was necessary. 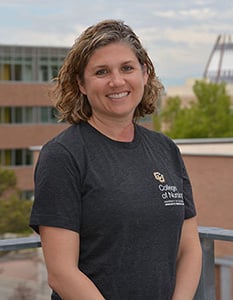 Director of the Office of Academic
Programs Jodi Cropper

One essential component to building the infrastructure was the addition of InPlace, a relational database system, which could integrate the University’s disparate systems – CUSIS, Typhon, NursingCAS, clinical placements, compliance and ordinary spreadsheets of students. It allowed the College to manage the college’s enrollments to determine student’s progression and what future teaching needs would be and when. “Projecting needs allowed us to plan for gaps in a much more proactive fashion,” said Cropper. Instead of spreadsheets, the team could pull reports that clearly showed specifics, including current and future needs and gaps.

As with anything new, fear and resistance are a natural bi-product. “Educating our constituents became extremely important,” said Small. The team began an internal PR campaign. “Helping people understand the capabilities of the technology and how it would be easier for them to facilitate what they do while removing human error became our mission,” said Cropper. “Once we could show how we could generate a report quickly that could keep our students on target for graduation with real-time data and specifics, people became converts.”

“We’ve seen a cultural shift even more so with the pandemic. Our system helped quickly identify students at risk for not graduating due to lack of clinical placements and where we could shift to accommodate them,” said Small. It provided data that allowed the College’s experiential team to come up with creative solutions to meet students’ needs. Previously, the College would have been reliant on manual data that would have taken much longer to process and might have been inaccurate.

Usually, these types of initiatives are thought of as a “necessary evil.” When completed, there is little fanfare. For Cropper and Small, that is not the case. The team is one of 10 finalists up for the 2020 CU Innovation & Efficiency Award, which will be announced in September.

“It’s been a challenge to change the infrastructure. We’re proud of what we’ve accomplished. More importantly, we know we’re having a positive impact on the College. To be recognized for the work is the icing on the cake,” said Small.