She hails from Denver, not Atlantica. She swims in an encased pool, not an ocean. And although she maybe thinks he is, her dad is not a king.

But Crystal Santos rivals Disney’s “Little Mermaid” in many other ways.

For starters, the first-generation college student overcame a rough childhood, growing up in a neighborhood where she feared drive-by shootings and lost a few friends to gang violence. Santos earned a bachelor’s degree in biology and a master’s degree in biomedical science.

She has the toughness and the spirit of Disney’s Ariel, volunteering in a morgue, rock-climbing as a hobby, and now attending the University of Colorado College of Nursing with her eyes on yet another degree. And she wasn’t born a mermaid. She became one.

So you want to be a mermaid? Good luck.

It’s been seven years since a friend suggested Santos apply at the Downtown Aquarium in Denver (home of the Mystic Mermaids) when she was an undergraduate in need of a job. Her arm needed no twisting. 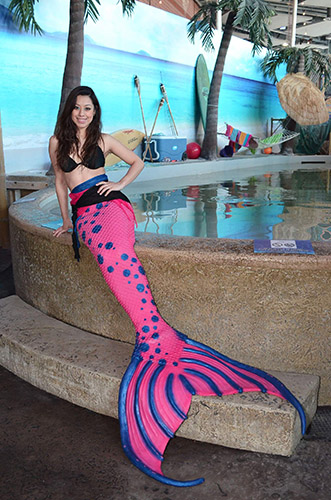 “I mean, I’m a mermaid. How cool is that?” said Santos, sipping tea at a coffee shop on the Anschutz Medical Campus between work and classes, still sporting her water-resistant mermaid makeup.

“But it’s not just sitting around looking pretty,” Santos said. “It’s really hard. Not everyone can do it, and it is very competitive.”

“That’s our job: staying under water and talking under water,” two requirements made harder by the dense salt water necessary for the array of ocean creatures that share the aquarium’s Under the Sea Exhibit with the performing mermaids.

“Water gets in my face and my sinuses, but I’ve gotten so used to it now, it’s like second nature.”

“I mean, I’m a mermaid. How cool is that?” — Crystal Santos, CU Nursing BSN candidate

Of course, they aren’t really talking (don’t tell the kids). The mermaids mouth words from recordings piped both underwater and in the viewing areas. Their scripts teach viewers — in an unusually magical way — about taking care of the Earth and its oceans.

“One of my favorite tails to wear is a black tail with sparkles,” Santos said of the crown jewel of her mermaid attire, a 40-pound, negatively buoyant, silicone tail that looks strikingly real. “It makes it easier to free dive,” she said of the tail’s engineering.

Despite its “little-girl-dream” appeal, her fellow mermaids are bright, fit, successful women and include pilots, nurses and future doctors. “We conditioned and trained for a month before we performed,” she said. “At first, I’d come home just exhausted.”

Now it’s her exercise, her job and her rewarding release.

Being a mermaid: What’s not to love?

“I love the exercise that comes with it, and I also love just the fact that anyone can watch the show, a child or an adult, and they all feel like it’s so real — especially in this society, where we lose a lot of that imagination and creativity because we are so caught up with routine all the time.”

Of course, the younger the viewer, the more magical it becomes. “Kids love us. They are just in awe: Wow, a real mermaid!” Two common comments from the little tykes at her meet-and-greets after shows:

“Mommy, can we take the mermaid home?” and “You smell fishy.”

Many sea creatures circle the mermaids as they perform, including nurse sharks, stingrays and eels. “You also can’t see in salt water,” Santos said. “I just see blobs. It was really scary at first,” she said, recalling the point during the interview process when applicants first had to dive into the 16-foot-deep pool.

“I saw the dorsal fin of a shark pop up, and I was like, hmmm, maybe I’m not in the right place.”