Originally trained as a physical therapist in her homeland of Germany, Sabs Sheppard chose nursing after moving to the U.S. 12 years ago. After working with nurses for years, she realized that the profession more closely aligned with her goals and ambitions to work in critical care. 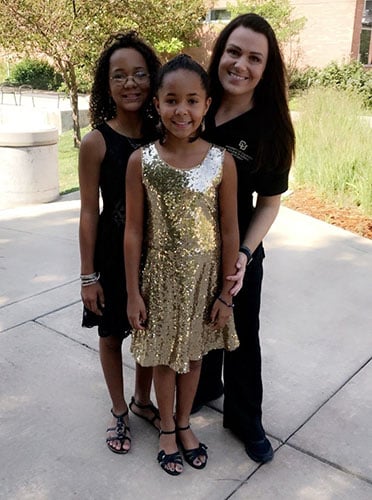 Wearing CU colors of black and gold, Sabs Sheppard’s daughters
Alaynah (11) and Ayannah (10) show pride in their mother and CU!

In Germany, “Nurses don’t have the same type of training or respect,” said Sabs.

When she told her father she was going back to school to become a nurse, he was incredulous. “He said, ‘Why would you change careers to become a nurse?’” But after he visited last summer, toured the Anschutz Medical Campus, talked to Sheppard’s professors, and saw her in action, he was floored. “He said to me, ‘It all makes sense now. I can’t wait for you to graduate and be a nurse.’” For Sheppard that was a big moment for father and daughter.

As a single mother, Sheppard has worked hard to juggle nursing school and work while raising her two daughters. When asked if she ever regretted going back to school to pursue nursing, she responded, “I wish I would have done it sooner so that I could already be out there and do so much more than what I am doing now! My passion for the nursing profession as well as knowing that my parents are proud of me is what drives me and solidifies that I have chosen the right path.”