That was one of the messages brought to the University of Colorado Denver and Anschutz Medical Campus this month by noted domestic violence scholar Jacquelyn Campbell, PhD, of Johns Hopkins University School of Nursing.

ACEs for Campbell have nothing to do with cards. Adverse Childhood Experiences (ACEs) are traumatic memories that run the gamut from parents’ divorcing to regularly witnessing your father beat your mother.

The more ACEs people have, the more likely they will become abusers, partner with abusers and suffer numerous and costly health issues, Campbell told a packed Fulginiti Auditorium. 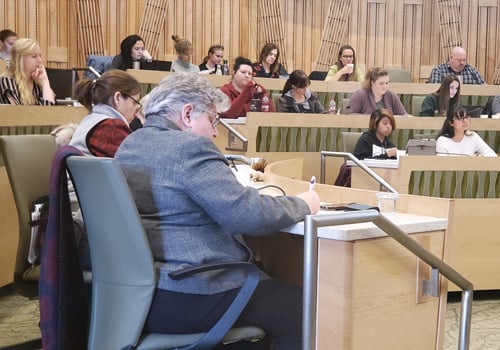 About 100 people participated in-person and another 100 joined via streaming during the second event on the Anschutz Medical Campus. CU’s College of Nursing and CU Denver’s Center on Domestic Violence co-sponsored the two-day seminar on Intimate Partner Violence (IPV).

When an ACE in the hole is not a good thing

Campbell, author of over 250 publications on violence and its health outcomes, hopes her work studying the effects of trauma on mental and physical health in people and communities can help providers in identifying violence early — before it becomes an often-deadly pattern.

Sharing two stories that set the tone of the talk, Campbell showed a picture of a family with toddler twins. The husband killed the wife and one toddler while the other toddler witnessed the murders.

“These things are happening all too often in our country,” Campbell said, after sharing another tale about a jailed man with a history of domestic violence who was let out on a lower bail than the prosecution asked for. He killed his wife a week later.

“When women are murdered, 40% to 54% percent of them are killed by a husband, boyfriend or ex-husband or boyfriend — nine times the rate of women killed by a stranger,” she said.

Being abused and witnessing abuse, especially in what is supposed to be a safe place, are the most destructive ACEs for kids, even if they do not actually see the violence, Campbell said.

“Witnessing may be hearing it or seeing your Mom the next day with a black eye,” Campbell said. “Even though moms hope they don’t — we fight after the kids go to sleep — kids always know,” said Campbell, who has interviewed more than 3,000 abused women herself.

With parental substance abuse, mental health issues and incarceration (all ACEs) prevalent in the country, many people have an ACE history. That includes more than half of the children in her home city of Baltimore, Campbell said.

“We, unfortunately, have horrible rates of incarceration of our African-American men in this country, so having a father who has been incarcerated is not uncommon.”

The other tragedy? The majority of children who witness a murder or are the first to find the body in their own homes (which happens in 70% of IPV murder cases with kids in the home) never receive counseling, Campbell said.

“If we don’t help heal her from those abusive relationships, if we don’t give her other ways to counteract that horrible stress … how does that help?” — Jacquelyn Campbell, PhD, Johns Hopkins University

These kids grow into teens, taking up drinking, smoking and other risky behaviors at a higher rate than do their non-abused peers, Campbell said. Social, emotional and cognitive impairment, which grow worse with the number of ACEs a child has, help lead to violence and other social problems.

As ACEs stair-step in kids, so do diseases and the risk of early death, including from homicide and suicide.

People with childhood trauma do drink, smoke and use other drugs more often than the overall population, leading to higher incidence rates of liver, cardiovascular and chronic obstructive pulmonary disease (COPD), Campbell said.

“Twice as many abused women smoke as non-abused women, and they have a terrible time quitting,” she said, using it as another example of why screening for abuse in the exam room is so important.

“What’s our favorite way of getting you to stop smoking?” Campbell asked. “Slap a nicotine patch on you and send you home. Maybe we’ll give you an app to help.” Then we wonder why these women fail to quit, she said.

“If we don’t help heal her from those abusive relationships, if we don’t give her other ways to counteract that horrible stress … how does that help?” 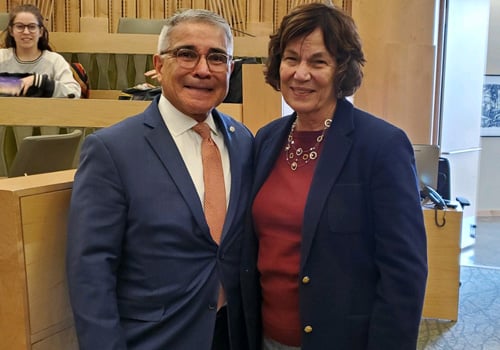 For women, the more ACEs they have, the more likely they are to partner with someone who abuses them in adulthood.

“That is a relationship we see over and over again in studies,” Campbell said. “The women who are abused by partners are highly likely to have experienced abuse as a child, either physical or sexual abuse,” Campbell said.

Noting that researchers have failed so far to answer the “why” of that statistic, Campbell called on the many nurse scientists in the room to consider it as a study focus.

“How are we going to prevent that young woman from ending up in an abusive relationship that she feels she can do nothing about if we don’t know the mechanism that puts her at more risk for that?”

Because of their abusive backgrounds, these women also suffer from debilitating mental health issues, Campbell said. One common one — post-traumatic stress disorder (PTSD) — creates symptoms that can accentuate feeling trapped and helpless, such as anxiety and hypervigilance, she said.

In addition to dying at the hands of an abuser, suicide is a chief outcome for the abused, affecting 20 percent of people with four or more ACEs. “You need to be alert to that possibility,” she said.

Abuse is tragic and so are its consequences, and it’s time to make some major policy changes and stop the violence, Campbell said, using the need for counseling on both sides of the domestic violence situation to prevent murder-suicide as an example.

“When abused women are murdered, 38 percent of their partners kill themselves afterward,” she said, emphasizing that people who abuse spouses are likely to have high ACE scores, too.

“We do not provide good suicidality interventions for men or women who abuse their partners, and we need to, because if he kills himself, he’ll take her with him.”