Sounds simple enough. But a group of students, including College of Nursing’s Kristen Patrick, recently had a taste of protecting public health. And simple wasn’t part of the experience.

“A lot of it is peer pressure and trying to look cool and fit in.”

“It was really intense,” Patrick said of the Rocky Mountain Public Health Case Competition held on the University of Colorado Anschutz Medical Campus. “It was outside of my comfort zone, but it turned out to be really fun,” she said of the event, which gives student teams 24 hours to create a plan to tackle a public health issue.

Patrick and her four other teammates left with a third-place title, $250 each in scholarship cash, and a deeper knowledge of the health crisis. At least 48 deaths and thousands of illnesses have been linked to vaping, spurring a national investigation.

“I learned a lot of facts about vaping that I didn’t know,” said Patrick, a BSN candidate set to graduate this spring. “I feel like, more than anything, I just understand the issue better and can educate patients better.”

“It was cool to just dip my toes into that a little bit,” Patrick said, referring to getting a feel for the public health nursing track. “It’s another option to explore later on.”

First, finding studies suggesting that product warnings that were colorful and more than half the size of the package did grab youths’ attention, Patrick’s team devised the graphic warning plan.

Then, learning that Eagle had the highest youth smoking and vaping rate in Colorado, Patrick’s team developed a theoretical public health course for that mountain town high school’s first-year class, catching them when they were most “impressionable,” Patrick said. Non-vaping, volunteer peer mentors were also part of the plan.

In a recent Centers for Disease Control and Prevention survey, one out of 10 middle-schoolers reported using an electronic cigarette in the past 30 days. The ratio jumped to one in four for high school students. 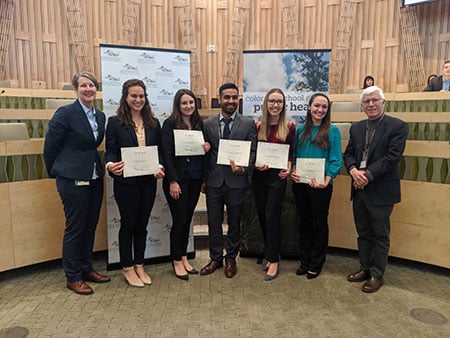 In hopes of counteracting advertising innuendo that Patrick said contributes to an impression that vaping is “cool” and “sexy,” the team created a social media campaign for its final phase. “We had advertisements showing healthy lungs and students being able to play their sports,” she said.

As part of the campaign, the team proposed partnering with Google so that when anyone searched for “vaping,” educational ads on the negative effects of vaping and quitting resources would display.

“A lot of it is peer pressure and trying to look cool and fit in,” Patrick said of the youth vaping trend. “I think that no one, especially kids, really knows what’s in these products. You have no idea what you’re doing, you think it’s cool, and it could possibly kill. That’s scary.”

After finding the cost of running a campaign and launching a new high school course challenging and pricey, Patrick found a new appreciation for public health employees, she said.

“Two million dollars over three years is not a lot of money to work with, but that’s probably often the reality,” she said. “People who work in public health have a difficult job.”