Home News What do you do on Friday nights? One student helped premature babies fight for life back to News

Most college students spend their Friday nights socializing and winding down from a long week of studying, not in a Neonatal Intensive Care Unit (NICU) cuddling babies. Andrea Poliakon is not like most students. During her undergraduate program at UCCS, you could find the Biomedical Sciences major shadowing nurse practitioners and physicians, volunteering as a newborn hearing screener, or cuddling the babies on a Friday night in Memorial Hospital’s NICU. 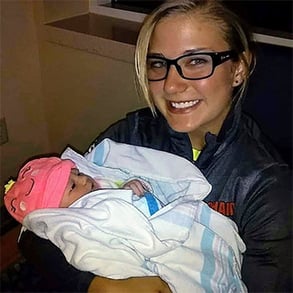 “Turns out cuddling babies is really important. Studies prove that cuddling changes their biology, and is good for them developmentally,” said Poliakon. When a baby is ill and in the NICU fighting for its life and unable to have that bonding time with their parents, human contact (or lack of) can affect them for years to come. “It was an awesome experience.” For Poliakon, it solidified her passion for nursing.

“Since the age of five, I knew I was interested in medicine – specifically advanced care, but didn’t know which path or specialty to take,” recalled Poliakon, who comes from a long line of nurses and health care professionals. In fact, five generations of women in her family have been nurse assistants or nurses. Initially, Poliakon chose to pursue Biomedical Science, and had a full-ride scholarship from the Boettcher Foundation to attend any Colorado college or university. As the second of only two Boettcher Scholars from Byers, a small town 50 miles east of Denver, she felt honored to be nominated and selected.

One of the Youngest in Her UCAN Cohort

During the last year of her bachelor’s degree at UCCS, she figured out that she wanted to be a nurse. “By that time, it was too late to change majors as it would have affected my scholarship.” Advised to complete her degree and follow up with an accelerated nursing program, she started at the University of Colorado College of Nursing Accelerated Nursing (UCAN) program only a few months after graduation – becoming one of the youngest students in the class. UCAN traditionally attracts students who obtained degrees in other fields than nursing, have been working for a while, and have decided to return to school for a nursing degree.

“I loved the UCAN program. It was an amazing learning experience.” Even though Poliakon was nervous about the speed with which the concepts were going to be delivered, “I think the concentrated learning actually helped focus my attention. And the faculty did a great job of reinforcing key concepts.”

Ready to start her career, Poliakon is preparing for her NCLEX and applying for positions including one at Children’s Colorado NICU where she can harness her passion for newborns.