Lauren Ledford’s interest in natural disaster response began with a five-week search and rescue-training course in Colorado, and a stint coordinating an international program with pre-med students to Nicaragua. In 2012, a super typhoon hit the Philippines. Everything changed for Ledford when she was asked to pull together a team from her program to help respond.

One team was devoted to body recovery and immunizations; the second ran the emergency department at the hospital. “As an EMT, I was at the bottom rung of the disaster medical team,” said Ledford. However, she brought a unique set of skills – the ability to coordinate and organize – and deployed as part of the second team. “I was hooked. It was incredible to see the international response, a unified command with one purpose, and all the organizations coming together to respond to a humanitarian crisis,” she recalled. In those situations, powerful friendships form, making it hard to say goodbye.

During that first deployment, she developed a passion for the medical piece and knew if she was going to continue to be part of a response team that she would need more medical knowledge. After a year of training, she became a paramedic and worked for Denver Health for four years. Currently, Ledford works for Swedish Medical Center in its emergency department. “Becoming a paramedic was the fastest way to get more medical training,” said Ledford. 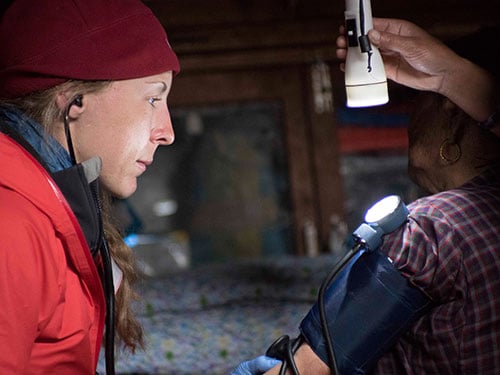 She followed her Philippines experience with responses to earthquakes in Nepal and Ecuador with Team Rubicon – a national disaster response organization that unites the skills of military veterans with civilian first responders. Providing all services free of charge, Team Rubicon focuses on serving vulnerable and at-risk populations affected by disaster.

According to Ledford, there is one thing you can guarantee in a disaster zone – babies come regardless. “Almost every operation I’ve been on, we’ve delivered babies. Disaster teams end up with emergency response skills and not a lot of specialties – like obstetrics,” said Ledford.

Even though Ledford is a paramedic, she knew she had more to learn and that more education was necessary to continue to serve as part of an international response team. “Paramedics aren’t widely utilized in international medical circles,” she said. Consequently, she enrolled in CU Nursing’s Accelerated Nursing program. Along with completing the program in December, Ledford is anxiously waiting to respond to another natural disaster. “I’m starting to get a little antsy. If it weren’t for clinicals that I have to complete right now, I’d be in Nicaragua helping with Hurricane Eta response,” she said.

With her sights set on eventually pursuing a nurse-midwifery degree down the road, she is sure to be a major asset on any response team.