Dr. Richard Radcliffe has always thought of himself as an avid bicyclist, but he never considered signing up for a sponsored bike race.

Not until his daughter, Julie, was diagnosed with Type 1 diabetes at age 13.

Radcliffe, a professor of pharmacology at the CU Skaggs School of Pharmacy and Pharmaceutical Sciences, said shortly after his daughter’s diagnosis, a friend encouraged him to sign up for the American Diabetes Association’s Tour de Cure bike ride, which puts money toward researching treatments — and finding a cure — for diabetes.

More than a dozen years after he started riding in the event, Radcliffe is working on an effort to organize a CU Denver | Anschutz Medical Campus team, open to anyone who is interested in signing up. He has been working with the Office of Student Health Promotion at the Anschutz Medical Campus to turn management of the team over to a student organization.

This year’s Tour de Cure event, scheduled for Sept. 7, will be at the Salisbury Equestrian Park and Sports Complex, 9056 Motsenbocker Road in Parker. It will feature events for people of all abilities, with opportunities to run, walk and ride along cycling routes of varying distances. People can even sign up as virtual participants.

Diabetes, a disease in which the body doesn’t create enough insulin or use it properly, has two main forms: Type 1 and Type 2. Pregnant women can also be diagnosed with gestational diabetes. Someone is diagnosed with diabetes every 21 seconds, according to the American Diabetes Association.

When Radcliffe and his wife, Carol, learned their daughter was one of those people, it was an emotional time for the family, he said. 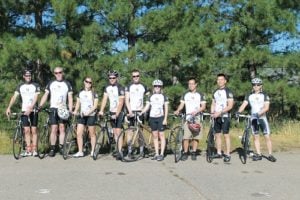 “There were ups and downs,” Radcliffe said. “It was probably more emotional than anything else. We had to help her count calories and watch what we were eating and that sort of thing and keep a close eye on her.”

The Tour de Cure event, the American Diabetes Association’s premier fundraising event, has stuck with the family since Radcliffe’s first year. Radcliffe and his wife have participated every year since. His daughter, who now works as a nurse at Children’s Hospital Colorado, hasn’t been able to participate in every race because of a busy Irish dancing schedule through the years. But every year she is available, she wears the event’s “Red Rider” jersey, created just for participants who have diabetes.

Eventually, Radcliffe extended the family tradition to CU Pharmacy by creating a team for the school. In 2013, the team had a particularly successful year, with 76 members who raised nearly $18,000.

Six years later, Radcliffe pushing toward a goal that has been in his mind for years: creating a team for the entire campus. Because the CU Anschutz Medical Campus is under the same administrative umbrella as CU Denver, the team extends to both campuses. But Radcliffe said anyone can sign up for the team, even if they don’t have an affiliation with the school.

“What I used to say to the pharmacy team is ‘if you’ve ever used a medication in your life, you’re eligible to join,’” he said. “You don’t have to have a connection to the school or the campus or anyone here.”

The day of the race, he said, participants can expect a big party that lasts all day long.

“There’s music all day,” he said. “They have lunch for you, they have beer, a lot of vendors.”