Former employee of the Skaggs School of Pharmacy and Pharmaceutical Sciences, Thomas G. Arthur, passed away April 3, 2021. Arthur joined the University of Colorado School of Pharmacy in 1979, as the Clinical Externship Coordinator, where he worked for the School until leaving the position in 1987. Aurthur, along with Dean Robert Piepho, PhD, helped pave the way for what is now the Doctor of Pharmacy degree at the School of Pharmacy.

Arthur received the Bowl of Hygeia, one of the most prestigious national pharmacy awards presented for Community Service in 2003. 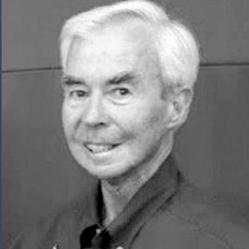 Arthur's distinguished career began in Sandusky, Ohio at Kubach & Buderer/Medical Center Pharmacy. From there, his career included positions as the Executive Director of the Colorado Pharmacist Association, Director of the Clinical Externship Program at the University of Colorado School of Pharmacy, Colorado Mental Health Institute at Fort Logan, and the Director of State Relations and Regional Director of Membership for the National Association of Retail Druggists. Arthur's personal files reflect many letters from his students, thanking him for his mentorship, guidance, and support. Many of the letters credit Arthur with positively shaping the individuals' professional and personal lives.

Arthur and his wife, Shirley, lived in Bailey, CO, until retiring to Grand Junction, CO. When not traveling, Arthur volunteered his time at the Mesa County Sheriff's Office. For 13 years, as a member of the Citizens on Patrol ("COPS") team, he spent many days and nights protecting crime scenes, directing traffic, participating in National Night Out events every year, and being readily available for any MCSO activity or community crisis. He gamely slipped into the hot and uncomfortable "McGruff" costume (Take a bite out of Crime) to entertain the kiddos of Mesa County. In 2010, Arthur was recognized by the Sheriff as the Citizen on Patrol Volunteer of the Year. He faithfully served the Mesa County Sheriff's Office through four Sheriff's administrations.

If you were lucky enough, you might have received one of Tom's personalized hand-carved walking sticks. If you were lucky enough, you could call Tom, "friend." Tom's sense of humor was legendary, even in the last days of his life. During the COVID lock-down, many friends received daily jokes and funny videos from Tom via email, to brighten up their days. Most recently, the next-door neighbor installing a new bathtub received a knock on the door, only to find Tom in his bathrobe, a towel around his neck, asking if the tub was ready!

Arthur's contributions and commitment to the pharmacy community are greatly appreciated. His dedication to further the practice of pharmacy exemplifies the Pharmacists' Oath to "devote myself to a lifetime of service to others through the profession of pharmacy."