Home News From the archives: CU Pharmacy’s all-female class of 1920 makes history back to News

As the country reflects on the 100th anniversary of women’s voting rights in the U.S., the University of Colorado Skaggs School of Pharmacy and Pharmaceutical Sciences is reflecting on a milestone of its own. In 1920, the school awarded degrees to an all-female class, a rare feat in a time when women were still fighting for their rights.

After completing the “prescribed work in the School of Pharmacy,” including courses in chemistry, botany, pharmacognosy and more, seven women made school history.

According to archival documents, the women earned their degrees on June 11, 1920 — just more than a month before the 19th Amendment to the U.S. Constitution was ratified, guaranteeing American women the right to vote. (As a testament to the state, however, Colorado women secured their right to vote in 1893.)

The class of 1920 consisted of the following students: 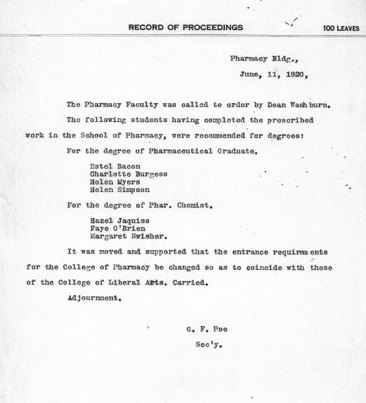 A historic School of Pharmacy meeting document lists the Class of 1920.

According to a University of Colorado course catalogue from the time, Pharmaceutical Chemist students completed their coursework in three years, setting themselves up for careers as store managers, manufacturers and dispensers of medical products in retail stores, public hospitals, mining companies and the U.S. Army and Navy.

Pharmaceutical graduates continued their schooling for a fourth year, preparing themselves for careers ranging from food and drug chemists to professors in colleges of pharmacy to directors of public health service laboratories.

In the years that followed, women continued to make groundbreaking advancements in the field of pharmacy and at the CU Skaggs School of Pharmacy.

Here are just a few of the school’s trailblazing moments for women:

Milestones for women continue through the years

More than a century later, women in pharmacy continue to break barriers. And from 1920 to today, CU Pharmacy has been a place where women make history.