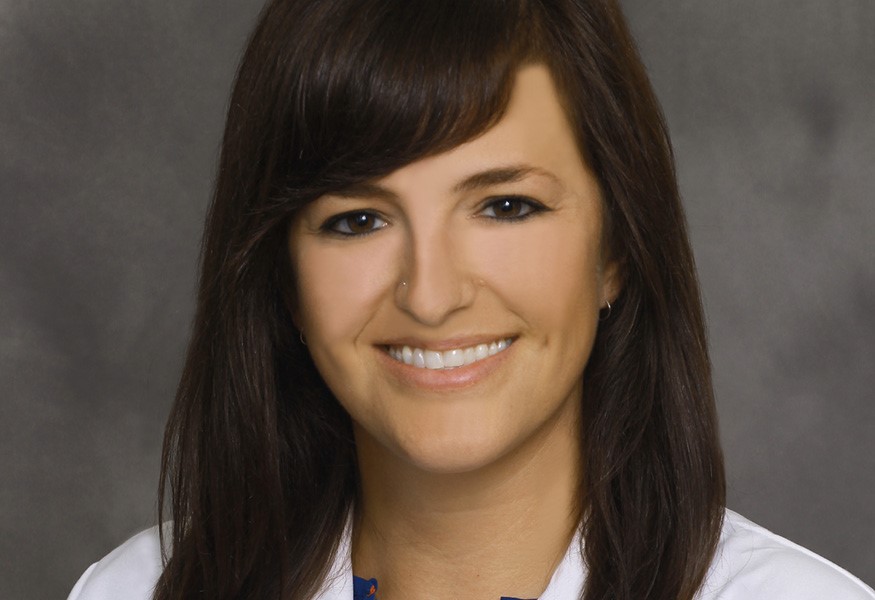 Following a grueling first-year residency, some pharmacy post-graduates might seek out an opportunity to downshift and relax.

But for Skaggs alumna Adrienne Kercsak (PharmD ’14), the “downshift” from her clinical pharmacy residency finally gave her time to undergo brain surgery this past April—to remedy a brain aneurysm first diagnosed nine years ago, but now three times the size and at risk of catastrophic rupture.

Though Kercsak’s four-hour open-head surgery was daunting, this was not her first life-threatening condition. Her travails living with Polycystic Kidney Disease (PKD) (which increases risk for aneurysms in women) inspired her to pursue an advanced education in pharmacy, as chronicled here.

Fortunately, Kercsak had the good wishes of her colleagues at Scripps Mercy Hospital in San Diego. She also had a deep reservoir of fortitude, positivity and spirit, as is clear from her Journey Through Surgery blog on which she chronicled her experience.

On the blog, she talks openly about momentous emotions as well as mundane details that humanize her journey, such as her deep housecleaning the day before surgery. “You know those dust bunnies you have up on your ceiling fan? Ya, take a look—it’s disgusting,” she writes.

“I want to help others who are dealing with this procedure as well as those that support and love them,” Kercsak wrote. “People survive and live, but there aren’t many out there taking the time to talk about their experience.”

Kercsak has led PKD-awareness-raising activities in several communities, and moving forward aims to continue her advocacy by helping initiate an aneurysm charity walk through the Joe Niekro Foundation in San Diego. Her experiences as a patient, she says, has given her greater empathy and compassion in communicating with her patients and their families.

Her most recent blog post details the catharsis she felt of running again on the Mission Beach boardwalk on which she logged many miles before the surgery. “I had to do it not only for my own sanity, but [also] I think I was running for those who have had aneurysms and can no longer run either due to losing their life, or loss of daily functions,” she writes. “This is a reality, and awareness needs to be spread because there are so many people out there going day-to-day with a ticking time bomb in their brain.”

Kercsak parlayed her PGY-1 tenure at Scripps Mercy into her dream job: a full-time emergency pharmacist position at the hospital, which often requires two years of residency training. Her success spotlights the value of treating your residency as a de facto job interview, and she benefited from: