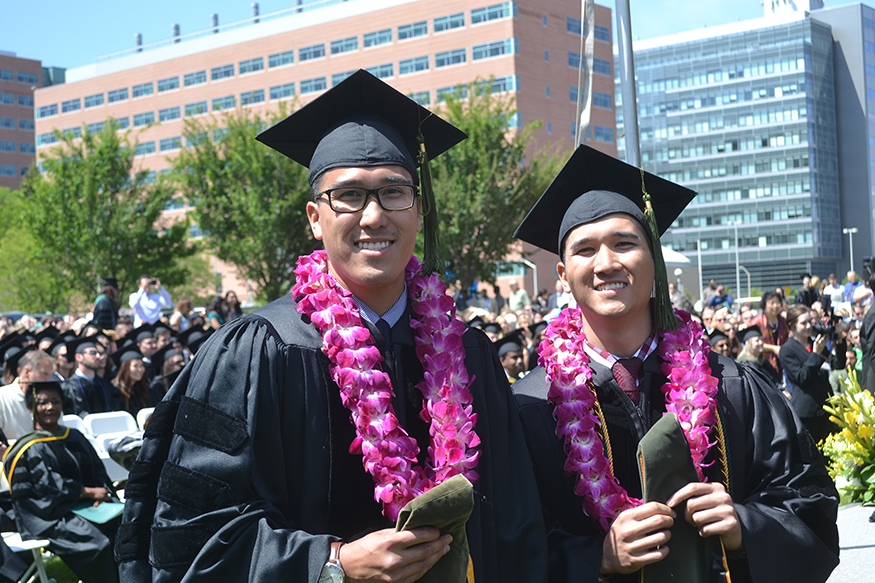 Today, the University of Colorado Anschutz celebrated graduating its 10,000th student in the health and health care disciplines since relocating to its present campus in 2009. And, brothers Jonathan and Jefferey Chheuy, who graduated from CU Skaggs School of Pharmacy and Pharmaceutical Sciences were two of them.

Born just 13 months apart, the Chheuy brothers are very close, and that's a good thing since the two have been confused with each other their entire lives.

Jon and Jeff are the non-twin twins of the Class of 2017.

These first-generation Americans -- whose parents escaped the Khmer Rouge genocide of Cambodia during the 1970s -- have a positive attitude about the confusion surrounding them.  "During admissions and even on rotations, we constantly got mixed up.  It's just something we're used to," says Jeff. They have fun with it and don't let it bother them.

Their path to pharmacy began in California while they were enrolled at the University of California Riverside. Originally, Jonathan was looking at optometry, while Jeff was pre-med. "Being a biology major the normal path was med school," says Jeff. But they both shadowed I their respective fields and discovered those paths weren't for them. Then their aunt, Kathy Tan, who is a pharmaceutical sales representative for GlaxoSmithKline, started talking to them about the profession of pharmacy.  She pushed them to shadow pharmacists and work in the field, and something clicked. "She was one of the biggest influencers in our decision to pursue pharmacy," recalls Jeff. Consequently, Aunt Kathy is one of their biggest fans, and was in attendance when they graduated with their doctorates.

After graduation, Jon ill return to California for a position with CVS and Jeff will be stationed in Pueblo with Walgreens. "I've been in retail pharmacy for eight years during undergrad and graduate school, and I still enjoy it," says Jeff.