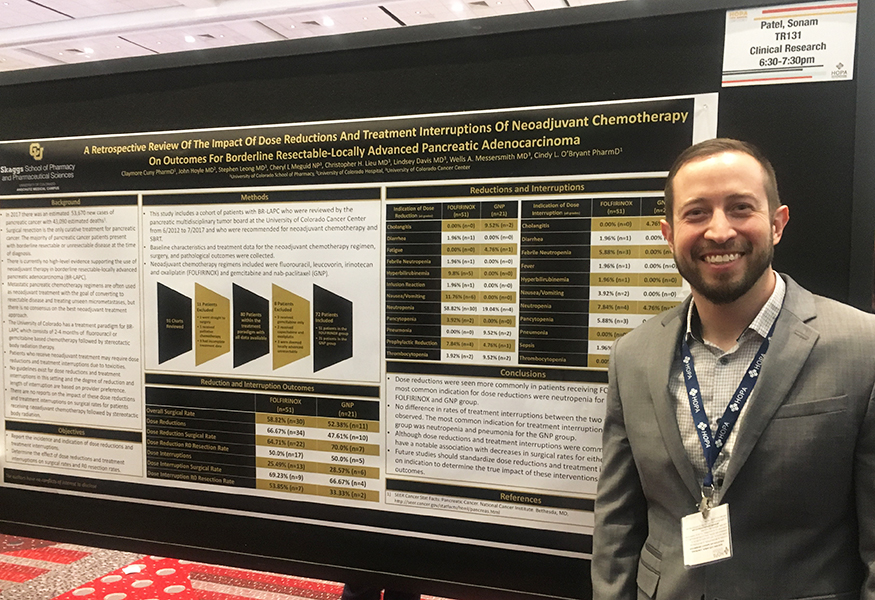 Congratulations to Clay Cuny, PharmD, a PGY2 Oncology resident and 2014 CU Skaggs School of Pharmacy graduate! His research project was chosen as a Top 10 Trainee Research Poster at the Hematology Oncology Pharmacy Association (HOPA) 2018 Annual Conference. This is a huge accomplishment as there were 188 trainee abstracts presented at the meeting!

Dr. Cuny's poster topic was: A Retrospective Review of the Impact of Dose Reductions and Treatment Interruptions of Neoadjuvant Chemotherapy on Outcomes for Borderline Resectable-Locally Advanced Pancreatic Adenocarcinoma. "It was an honor to be recognized by HOPA as one of the top 10 trainee posters this year. My father died from gastric cancer and because of this gastric cancers have always been a passion of mine. I look forward to continuing my research once my residency is complete," Cuny explains.

Below is the transcript of his presentation about his poster at HOPA 2018:

Hello, my name is Clay Cuny, thank you for the opportunity to discuss our research at the University of Colorado. Today I will be discussing the results of a retrospective review of the impact of dose reductions and treatment interruptions of neaoadjuvant chemotherapy on outcomes for borderline resectable-locally advanced pancreatic adenocarcinoma.

The American cancer society estimates that in 2018 there will be 55,440 new cases of pancreatic cancer diagnosed and an estimated 44,330 deaths in the US. Surgical resection is the only cure for pancreatic cancer and of the newly diagnosed patients less than 20% are surgical candidates. For patients with tumors located on the head of the pancreas a pancreaticoduodectomy, or Whipple procedure is the preferred surgery.

The University of Colorado has developed a practice model for treating these patients which consists of 2-4 months of neoadjuvant chemotherapy with FOLFIRINOX or Gem/Abraxane followed by stereotactic body radiation therapy and re imaging to assess for surgical resectability.

In this study we report the incidence and indication of dose reductions and treatment interruptions and their effect on surgical rates and RO resection rates. We report on a cohort of patients with borderline resectable locally advanced pancreatic adenocarcinoma who were reviewed by the pancreatic multidisciplinary tumor board at the University of Colorado Cancer Center from June 2012 to July 2017 and who were recommended for neoadjuvant chemotherapy and SBRT prior to surgical resection. The neoadjuvant chemotherapy regimens included in the study were FOLFIRINOX and Gem/Abraxane. 91 charts were reviewed and 11 patients were excluded. One went straight to surgery, 1 received palliative chemotherapy, and 9 had incomplete treatment data. 80 patients were identified to who fit within the treatment paradigm. Of these 80 patients 8 were excluded because they received gemcitabine only, capecitabine and oxaliplatin, or had locally advanced unresectable disease as defined by the NCCN. In total 72 patients were included in our data analysis. 51 patients in the FOLFIRINOX group and 21 patients in the GNP group.

For the GemAbraxane group 11 of the 21 patients went to surgery. A total of 10 patients required dose reductions and 7 of these patients continued onto surgery and 5 had R0 resections.

In general, our providers will utilize FOLFIRINOX in the neoadjuvant setting unless the patient has poor performance status or is thought to not be able to tolerate treatment with FOLFIRINOX. This was supported by increased incidence of dose reductions in the FOLFIRINOX group compared to the GemAbraxane group. However, the incidence of treatment interruptions was relatively similar between the two groups.