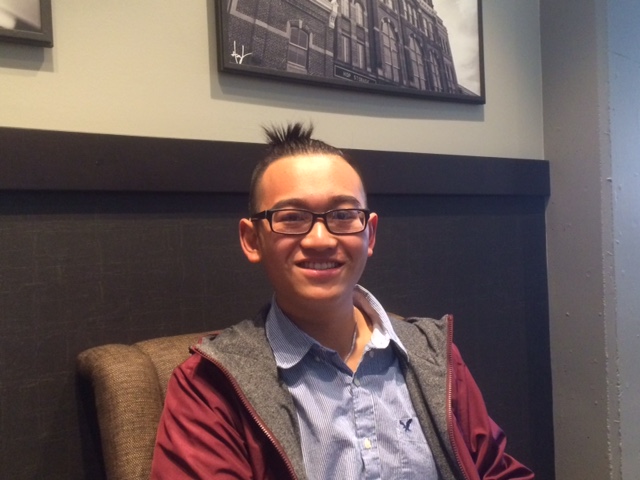 Ryan Duong and Justin Cheung didn’t know each other at Bear Creek High School – Duong is a year older – but their educational paths have been almost in lockstep since leaving the Lakewood school. They both point to an innovative CU pre-collegiate pipeline program that exposed them to careers in health care.

Both students are children of Asian immigrants – Duong’s family hails from Vietnam while Cheung’s is from China – and both are among the first in their families to attend college (Cheung’s older brother enrolled first, also at CU Denver). Now they have their sights on taking their education journeys to yet another level – specifically Doctor of Pharmacy (PharmD) degrees.

At the start of this path, Duong and Cheung both enjoyed summer classes at the CU Anschutz campus as part of the CU Pre-Health Scholars Program (CUPS), which is geared to high school students. “I got to sit in the classroom where actual pharmacy and medical school students sit,” Duong said. “That’s a pretty special thing to do when you’re in high school. It gives you a glimpse into what it would be like to be a college student.”

Cheung still keeps in touch with friends from his CUPS high school cohort. “It was really insightful,” he said of the program. “We had a pharmacy component where pharmacists would come teach, so it kind of opened my eyes to pharmacy. We researched some diseases and learned how they are treated.”

The experience was so influential to Cheung that now, as a CU Denver junior majoring in biology (pre-pharmacy track), he works part time as a peer advocate and teacher’s assistant in the CUPS program. He was contacted directly about the position by Abenicio Rael, assistant director of the Office of Inclusion and Outreach at CU Anschutz, which oversees CUPS.

“It’s a cool experience and I enjoy the work,” Cheung said. “The high school students really appreciate it, and some of them have told me how they got new perspectives of what they want to do as a career.”

Duong, meanwhile, first got the idea of pharmacy as a potential career from his uncle, who graduated from the CU Skaggs School of Pharmacy and Pharmaceutical Sciences. He was further influenced by clinical pharmacist Candido Chacon, PharmD, who spoke at Duong’s CUPS classes. Then, when Duong was a sophomore biology major at CU Denver, a fellow student recommended him for a part-time job at the VA Hospital. As a pharmacoepidemiology researcher, he works with arthritis patients.

Duong remembers being especially struck by a VA patient with paralysis. The man was unable to work and struggled to pay for his medications. “As a student the only thing I could do was

comfort him,” he said. “That sparked my idea to become a clinical pharmacist. I really love being able to interact with patients and trying to help them with their medication issues. I get to imagine myself doing that for them sometime in the future (as a career).”

Duong, who is in the Undergraduate Pre-Health Program (UPP), also wants to help patients who, due to language or other cultural barriers, struggle to access quality health care. Duong suffered from acid-reflux when he was very young, and he remembers the difficulty his parents – then newcomers to the U.S. – had in finding proper health care. “With my parents being immigrants, I’ve seen health disparities,” he said. “That’s the niche I want to go into. UPP (a program for college students) really emphasizes making sure there’s quality health care for everyone.”

These programs’ goal of engaging underrepresented students in higher education – including the Health Occupations Student Association (HOSA, see sidebar) – hit the mark with Duong and Cheung. Duong was recently accepted into the PharmD program at the Skaggs School of Pharmacy and Pharmaceutical Sciences. His first year (2016-17) will simultaneously serve as the fourth year toward his bachelor’s degree, earning Duong a bachelor’s in medical sciences.

While at CU Denver, both Duong and Cheung have been active in various extra-curricular activities. Duong has served as a peer advocate in CUPS, student body senator, board member of the Rays of Grace nonprofit organization, and networking leader on the Council for Asian Student Leaders (CASL), a group he helped revive after it had begun to struggle. Cheung, meanwhile, played on the club tennis team and has been a regular at CASL events.

“CU Denver students are here because they’re invested in their education,” Cheung said. “Being here was a good choice for me because there wasn’t too much to distract me from what I wanted to do. I was able to hone in on my path.”

That path became even clearer when Cheung took the BIOL 1332 Drugs, Health and Wellness course, coordinated by Catherine Jarvis, PharmD, Associate Dean for Student Affairs of the pharmacy school. “Anyone interested in pharmacy should take that class,” he said. “It’s really good insight into the profession.”

Duong, meanwhile, is looking forward to continuing his educational trajectory as well as growth as a leader when he begins pharmacy studies at CU Anschutz.

“Leadership is very important to me,” he said. “In order to be someone who is influential and be a health care professional who impacts the world in a positive way, you’ve got to know how to be a leader and how to talk to people.”