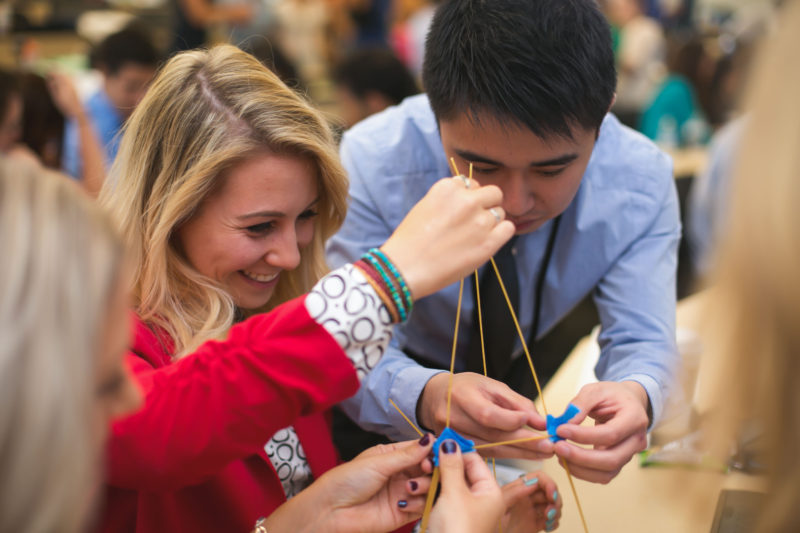 There’s good news to share from the Skaggs School of Pharmacy and Pharmaceutical Sciences (CU Pharmacy). Applicant numbers at CU Pharmacy rose 30 percent for the incoming class of 2017, even as applications to pharmacy programs nationwide are down 3 percent.

While the number of pharmacy schools in the U.S. has increased from 80 in 2009 to 143 today, the number of students applying to pharmacy programs seems to have plateaued. In the resulting competition for pharmacy students, CU Pharmacy is faring well – and the school’s leaders credit high-quality academic programs and enhanced recruitment efforts for this success.

“We are a top-tier school,” said  CU Pharmacy Dean Ralph J. Altiere, PhD. “We recognize that competition for students has increased considerably over the past few years, and that led us to undertake a reorganization to establish a marketing unit last year.”

A growing reputation and top-notch academic and professional programs are motivating students to apply to and attend CU Anschutz’s No. 22-ranked pharmacy school.

“Skaggs has a reputation within the profession that is nationally and even internationally recognized,” said Hawaii native and second-year CU Pharmacy student Ryan Sutherlan. “Other schools that I considered also had strong reputations, but I worried that they may not be able to challenge me in the way I felt CU would.”

Both Sutherlan and first-year pharmacy student Eric Hartsfield noted the campuswide Interprofessional Practice & Education program as a driver for their interest in the school.

“I believe the future of medicine is based in collaborative care and want to learn as much about it as I can,” Hartsfield said. “I have really appreciated the stellar faculty and high-quality facilities of the campus.”

And as students express satisfaction with the pharmacy school, CU Pharmacy leadership express pride in both the students and faculty.

“Our students consistently outperform other schools by winning national competitions,” Altiere said, “and our faculty are lauded nationally with education and clinical awards.”

To build on its reputation and promote its successful programs, CU Pharmacy has centralized and fortified its recruiting, marketing and communications efforts into a six-person team led by Dana Brandorff, director of marketing, communications and alumni affairs.

The team is implementing several new tactics to reach prospective students, including a strategic database management system, a multi-pronged advertising campaign and a live chat feature on the school’s website. To complement these traditional and digital approaches, the marketing team has had in-person interactions with more than 3,000 prospective students, advisors and influencers at conferences and other pharmacy events.

These efforts have led to that 30-percent application increase, as well as a completely full 2017 incoming class for the school’s PharmD program. And now the challenge, Brandorff said, is not just attracting students but changing the perception of what pharmacists do.

“The perception is that pharmacists only dispense medications,” said Brandorff, who came to CU Pharmacy in 2009. “Today, pharmacists are on the front lines of health care – in the ER collaborating with nurses and doctors, in clinics managing diabetes or heart disease patients and at independent pharmacies compounding medications or vaccinating patients. Our job is to help the general public understand the vital role pharmacists play in health care.”

To that end, the group engages in various community outreach activities, including volunteer days at health fairs and other events; a new Speakers’ Bureau showcasing faculty, alumni and students; and a new education initiative focusing on academic advisors, faculty members, administrators and students at Colorado universities. The school also conducts live, once-a-month call-ins on 9News and creates and distributes its own video content that is regularly aired by local and national television outlets.

CU Pharmacy is also helping change Colorado laws to allow pharmacists to be reimbursed for pharmacy services other than dispensing. Altiere believes this would create more opportunities for pharmacy practice and help change how the public values pharmacists.

Although changing perceptions takes time, many student perceptions are right where CU Pharmacy wants them to be.

“At CU Anschutz, I am consistently impressed and humbled to be among the ranks of the amazing student body, who are so wildly unique, brilliant, compassionate and welcoming,” Sutherlan said. “It’s like being a part of a large, extended family.”

And Sutherlan said this positive experience began before he even enrolled as a student.

“CU Pharmacy always reached out to me … which stood in contrast to other schools’ carbon-copy communications,” Sutherlan said. “I don't regret my choice of schools at all.”