Master of Pharmaceutical Sciences student Glenn Harter is ready to take on a PhD in organic chemistry this fall at the University of Southern California (USC), and he views his master’s degree at CU Pharmacy as a necessary step to achieve his considerable dreams. 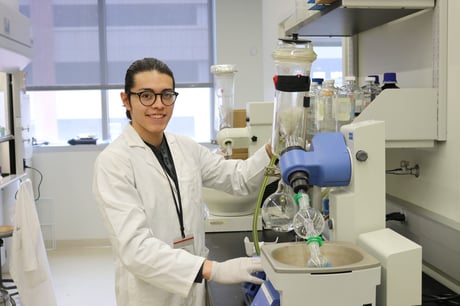 Growing up in a Latino family in Colorado, Harter is a first-generation graduate student. As an undergraduate studying biochemistry at the University of Northern Colorado, he was awarded a McNair Scholarship from the U.S. Department of Education, an award designed to prepare undergraduate students for doctoral studies through involvement in research and other scholarly activities. McNair participants are either first-generation college students with financial need, or members of a group that are traditionally underrepresented in graduate education and have demonstrated strong academic potential.

“Getting that scholarship opened my eyes to what I can do in this field, and I also was given the opportunity to study models of cancer treatment,” Harter said. “Between this project, and a second project soon after, I was hooked on a career in drug development.”

Harter was set to go to CU Denver in the fall of 2019 for his master’s degree, but was accepted into the inaugural Master of Science in Pharmaceutical Sciences class at CU Pharmacy. He decided to change his plans, and today is one of the first graduating students of the program.

“I already had my living situation and job secured, thinking I would be in a different part of the city,” he said.

Harter had to take a bus two hours each way to commute to the Anschutz Medical Campus.

“I always worked through school as a phlebotomist, so I would sometimes get on the bus at 6 a.m. to make it to class at 8 a.m., have school during the day, then go to work, where I would stay until 10 p.m.,” he explained. “If I closed that night, it would be a two-hour bus ride home, and then start again the next day.”

Harter made the most of his commute by studying. As a member of the first class of master’s students, all of Harter’s courses included PhD students. The new program integrates coursework where appropriate, something Harter felt was intimidating, but only at first. He started to think about school like soccer.

“If you only play against the same skill level, you don’t get any better,” he explained. “I wanted to play against someone better than me. I wanted to learn with someone who knew more, that’s how you keep learning.”

On campus, Harter started work under Daniel LaBarbera PhD, Associate Professor and Director of the new Center for Drug Discovery.  LaBarbera’s laboratory is engaged in multidisciplinary cancer drug discovery and development with a focus on translating lead drugs that are effective against metastatic cancers that are resistant to standard of care clinical therapies.”

“[Dr. LaBarbera] definitely helped me through the technical side of this program as well as my PhD applications,” Harter said.

Also helpful in his journey was David Kroll, PhD, Professor and Director of Master’s and Certificate Programs in Pharmacy and Pharmaceutical Sciences.

“I consider myself fortunate to have played a role in [Harter’s] education and pursuit of his dream,” Kroll said.

When COVID became widespread in the spring of 2020, Harter was still taking public transportation to keep up his job and studies, although many of his classes were moved online.

“I’m a social person, so that was tough as well,” he said. “My life became the bus ride and the four walls of my house.”

It also threw a wrench in his master’s thesis work, with much of the research partially complete but not ready for publication.

“I think I am most proud of how my thesis actually turned out,” Harter said. “COVID had some challenges, and I am proud that despite having to move my research to online, I was able to complete this [capstone] paper and I’m proud of making it through.”

“My work with cancer treatment as an undergraduate stuck with me,” he said. Harter’s plans are to develop treatments, organic compounds, and drug therapy to combat cancer.

“I want to work for industry, maybe overseas, where I can research and find new ways to prevent and treat cancer,” he said. “I am interested in compound modeling, and documenting small molecules, so I’d like to work for a Pfizer or larger company where I can explore more.”