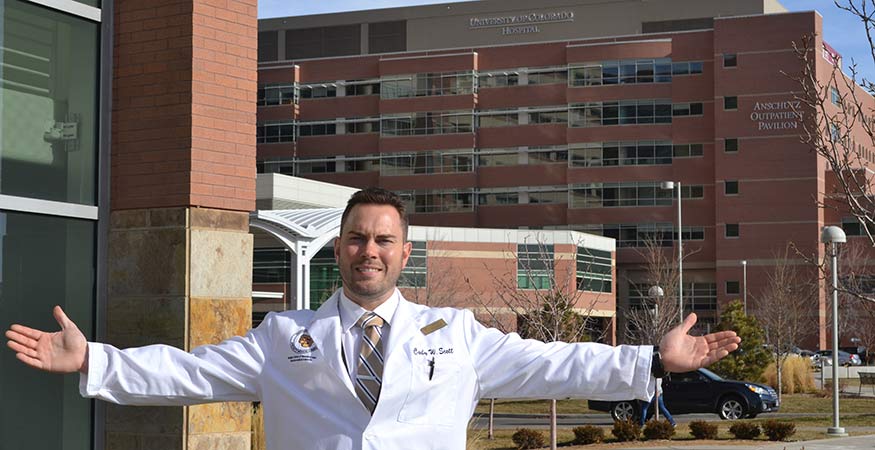 Home / News / Completing a Dual Degree is Twice the Challenge

Cody Scott loves going to various sporting events and working out at the gym – when he has time, of course. Scott is not only completing his PharmD, but also pursuing his Master’s in Business Administration at Regis University while working at Walgreens and completing his advanced Interprofessional Pharmacy Experience at the University of Colorado Hospital.

“I was pre-pharmacy since day one of college,” said Scott, who graduated with a degree in biology from the University of Colorado at Boulder. “When I was growing up, both of my neighbors were pharmacists, and I saw how they lived and how they were as people, and I became interested in pharmacy.”

A Leg Up in Pharmacy

Scott, who completed several internships and worked at UCH in addition to Walgreens, says he’s most interested in working in the pharmaceutical industry, and believes an MBA will set him apart from the competition.

“I wanted an MBA for, really, three reasons: I wanted to be a competitive applicant for whatever job I ultimately go for, I enjoy making those big-time decisions, and I wanted to learn the ins and outs of business so I could someday start one or take one over,” he said.

Scott’s typical week includes pharmacy and business classes Monday through Friday, his rotations and internships, working at Walgreens, and hitting the gym.

“The time commitment is the biggest challenge. MBA courses often require significant group work, which is difficult given the rigor of the PharmD program,” said Gina Moore, assistant dean for Clinical and Professional Affairs and one of Scott’s instructors during his first year of pharmacy school. “Since students are still learning about the pharmacy profession, they may not have all the background to apply that perspective to a business setting, but at the same time have a fresh perspective. Cody has been very realistic about the time commitment needed to complete both degrees and has done a great job of balancing multiple demands.”

“It really just comes down to time management, compartmentalizing, and being organized and not procrastinating,” he said.

Scott will complete his MBA this coming August, and his PharmD in May 2017.

“Cody is unique in that he has a true entrepreneurial spirit,” said Moore. “As he has gone through the PharmD curriculum, he has had numerous innovative business ideas that are creative and unique.  He has a great perspective, and I always enjoy interacting with Cody and challenging him with potential business obstacles.”