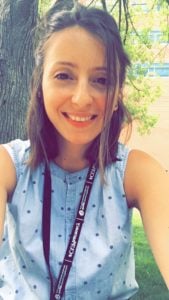 Neemat Srour, a spring 2020 PharmD graduate, has lived and worked all over the world.

From earning a Master’s degree in France to working as a hospital pharmacist in Saudi Arabia, she has grown an international career with a major goal in mind: one day expanding the profession of pharmacy in Lebanon, her home country.

When she decided it was time to advance her career even further by earning a Doctor of Pharmacy (PharmD) degree, Srour chose the CU Skaggs School of Pharmacy and Pharmaceutical Sciences’ International-Trained PharmD (ITPD) program. The program, operated by CU Pharmacy’s Distance Degrees and Programs (DDP) Office, is designed to train licensed pharmacists around the world to enhance their patient-centered skills.

When the program started in 2014, it became the first and only distance-based Accreditation Council for Pharmacy Education (ACPE)-accredited PharmD degree program with an international focus.

Now that Srour has graduated, she intends to do what so many ITPD graduates have done before her: advance pharmacy at home and worldwide. But first, she’s going to take her training a step further.

Her next stop is Houston, Texas, where she will train in a post graduate year one (PGY1) residency at Houston Methodist Hospital.

Read about Neemat’s journey, in her own words:

I am a non-traditional pharmacy student born and raised in Beirut, Lebanon. I attended Lebanese University, where I earned my bachelor’s degree in pharmacy, and I completed my Master’s degree in Strasbourg, France. I moved later to Saudi Arabia and worked as a hospital pharmacist.

I joined the International-Trained PharmD program (ITPD) in the summer of 2015, and moved to Colorado in May 2019 to complete my advanced pharmacy practice experiences.

Just before graduation, I presented an Honors research project with the school, and with that, I became the first DDP student to graduate with Honors!

Recently, I matched into a PGY1 pharmacy residency at Houston Methodist Hospital, and I am looking forward to further advancing my career next year.

My goal is to integrate my passion for critical care, emergency medicine and infectious disease with my aspiration to advance the pharmacy profession in my home country and worldwide through direct patient care, precepting, furthering the pharmacy literature, and expanding pharmaceutical services.

Outside of pharmacy, I love spending my time with my daughter and son hiking and adventuring. We also enjoy exploring the Asian restaurants in Denver, being outdoors, and traveling.

Learn more about PharmD pathways offered through the Distance Degrees and Programs Office by visiting https://bit.ly/2RSEaQM.