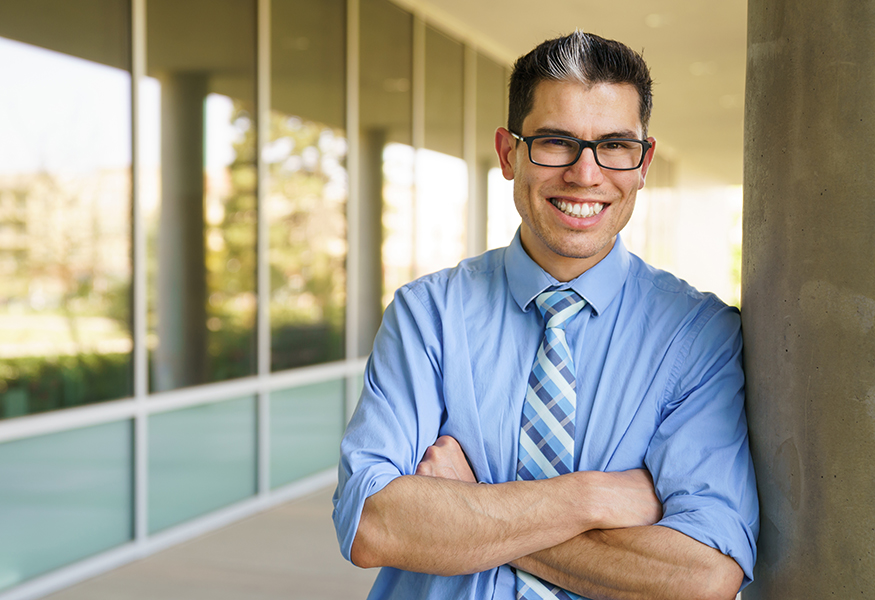 When Joe Oropeza was 17 years old he wanted to become an Army Ranger, one of the most elite soldiers in the U.S. Army. But two strokes and open heart surgery — prior to his high school graduation — put an end to his military career before it started.

“I was 17 and invincible,” says Oropeza, who recently celebrated his 12th-anniversary post-surgery.

After experiencing a “funny feeling” in his left arm and leg, he told his dad. Eight hours and another stroke later, he finally went to his primary care physician who ordered he go to the hospital for a brain scan. “In my family, you didn’t go to the hospital unless you were dying. Well, I was,” recalls Oropeza.

According to Oropeza, “It was a very minor event from which I could physically recover, but my dreams of becoming an Army Ranger were dashed.”

The MRI revealed damage to the right side of his brain, which was consistent with a stroke. His medical team was perplexed as to why a healthy teen would suffer a series of strokes at his age.  So, they conducted myriad of tests that yielded nothing.  Then, one of his cardiologists suggested checking his heart via transesophageal echocardiogram. Oropeza underwent the procedure on his 18th birthday and received quite the birthday present. A little tumor of fibrous tissue — called a myxoma —was causing his problems. “Every time my heart valve opened it would suck up the tumor into the valve and cause blood clots,” says Oropeza.

He was given two choices. He could be on lifelong warfarin or get the tumor surgically removed. As an active person who enjoyed playing contact sports, he didn’t think blood thinning medication was a good option. So, he chose the surgical route.

“Everything was moving so fast that day. I was terrified. I had a sense of ‘this cannot be happening,’” remembers Oropeza. Just hours into his 18th birthday, he signed all the legal documents to undergo open heart surgery, including what he calls the “death waiver.”

“My surgeon tried to assuage my fears. He told me there was less than a 1 percent chance of dying. You know, as a teen confronted with open heart surgery that really wasn’t that reassuring. It still meant I could die,” he says.

“I’ve been blessed with the way everything turned out. Faith got me through and because I was in such great shape my road to recovery was not as difficult for me.”

Once again, however, Oropeza was in unchartered territory. “Physical therapists don’t normally see young adults in great shape raring to run after heart surgery. I turned all their treatment plans upside down,” says Oropeza.

Two and a half months’ post-surgery, he was given full clearance. For most heart surgery patients, it averages about six months before they are green-lighted to regular activity.

After Oropeza’s brush with death put the kibosh on his plans, he decided to go to college for a degree in fire science and firefighting. “It was the closest to Army Ranger training that I could envision,” says Oropeza, who worked as an EMT while in school.  The EMT experience allowed him to see health care up close and what he saw intrigued him. He realized the landscape of healthcare was changing from a physician-centric model to something more team-based, which was very attractive to him. “It seemed very similar to my first love of being an Army Ranger where the team works together to bring outcomes and help communities. As an EMT I saw that non-physician partners were valued and could make bigger impacts,” reminisces Oropeza.

His exposure to pharmacists as medications experts caused him to do a double take. “I loved everything I saw about pharmacists.  I saw this as an opportunity to be involved in patient care and thought it could be limitless,” he says.

Once his father heard about his goals, he pointed out that during Oropeza's recovery from heart surgery a pharmacist was instrumental in ensuring his healing.  By mistake, Oropeza had been prescribed two different and conflicting beta blockers, which could have caused major problems.  The pharmacist warned the cardiologist and changes were made. “I didn’t recall that, but my dad did. So, it’s a bit serendipitous that pharmacy played a significant role in my recovery and now here I am ready to embark on my pharmacy career,” says Oropeza.

Post-graduation, Oropeza will be joining his wife in Texas where she is a Physician’s Assistant (PA) and he will begin a PGY-1 residency at Baylor University Medical Center. The two will finally be together after three years of separation while she was in PA school in Dallas and he was pursuing his PharmD at CU.  “Patience, understanding and a lot of love have gotten us through,” says Oropeza.