Jennifer and Nicholas Tomlinson were both emergency medical technicians in Georgia when they decided it was time for a career change. The couple, married since 2015, found that as they worked on ambulances, they saw impacts on patients when they didn’t take their medications.

Studying pharmacy seemed like a natural fit, and they had already followed the same career path as each other for seven years. So, together, they enrolled at the University of Colorado Skaggs School of Pharmacy and Pharmaceutical Sciences to begin pursuing a new career.

Four years later, the CU Pharmacy students are still meeting milestones together. Not only did they graduate with their Class of 2020 classmates, but the couple also welcomed a baby girl, Rio, to their family on Jan. 14, 2020.

Throughout pharmacy school, the couple continued their tradition of growing their healthcare careers together.

During their final year in school, both students earned student leadership roles with the American Society of Health-System Pharmacists. Nicholas served as a member of the Pharmacy Student Forum Executive Committee, and Jennifer was the student representative on the Council on Public Policy for the 2019-2020 term.

As part of Nicholas’s role with the organization, he worked with other members to represent student pharmacists, helped provide professional development resources and advocated for pharmacy as a profession.

Jennifer was the student voice of the Council on Public Policy, which recommends professional policies related to laws and regulations that have a bearing on pharmacy practice.

This year, she joined with the council to lobby Colorado senators and House representatives to increase funding for pharmacy residency programs, continue $340 billion in funding for hospitals and decrease healthcare costs for patients, among other policies that are supported by ASHP and the Colorado Pharmacists Society.

“I absolutely loved my experience on the Council on Public Policy,” Jennifer said. “I felt so honored to be a voice of the constituents of Aurora and of pharmacy students across the country. I felt the weight of my words as I gave my 30-second pitches, along with other Colorado pharmacists, to the professionals who work for Senate and House representatives.”

For Nicholas, getting involved in the organization meant pushing for the advancement of pharmacy, saying it’s a benefit for pharmacy students to get involved in the profession early.

“Having worked with ASHP and my fellow Executive Committee members, I believe we have created a more informed student body across the country by taking into account their needs,” he said. “We have used surveys and restructured student-led advisory groups to work on and complete projects that benefit ASHP's student members and make ASHP their professional home.”

As part of his position, he was also the Executive Committee Advisor to the Advancement of Pharmacy Practice Advisory Group, one of five of ASHP’s student-led advisory groups.

“I know that all the students, including myself, with working on these projects are proud to be on the forefront of our profession, creating a bright future for all pharmacists,” he said.

Growing their family during a pandemic

As the couple’s careers grew during pharmacy school, so did their family.

Their daughter, Rio, arrived at the beginning of their final semester at CU Pharmacy — and during the coronavirus pandemic.

“She could not have arrived at a more opportune time,” Jennifer said. “She has since brought so much joy to us, our families, and friends, because with the social distancing orders, we try our best to dress her up and send her many quirky pictures to everyone to bring a little joy to their day.”

During the coronavirus pandemic, both students experienced the impacts in health settings first-hand.

During Nicholas' community advanced pharmacy practice experience (APPE), he encountered a customer who tested positive for the virus. This encounter was prior to the implementation of the stay-at-home order, so he was concerned about bringing the virus home to the family. Luckily, he worked mainly in a separate room.

Jennifer was on her health-system APPE at a local hospital when the epidemic became a pandemic. She saw and rounded with the medical team that provided care for the first Covid-19 positive patient at that hospital. 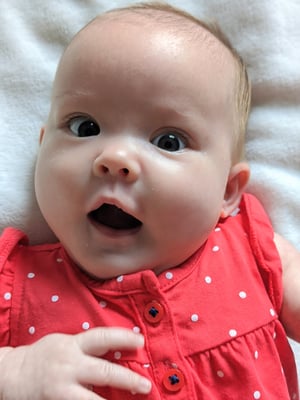 Their daughter made a world of difference for their family and friends.

“One of our friends thanked us for sending just one picture to him via text, because he had been working in a retail pharmacy setting, wearing a mask for 13 hours a day, and felt sad that he could not return to his wife each night because she, too, was working on the front lines and had to live away from him,” Jennifer said. “He thanked us and told us how the one picture made his week. Therefore, it may not be much, but we try to bring some laughs and joy to our friends who are working tirelessly during this pandemic so that we all may have a better tomorrow.”

When it came to changing careers, Jennifer said, the couple looked at pharmacy as a change of pace from the demands of working on ambulances.

“After several years, we both decided we wanted to see the other side of health care,” she said. “We were used to seeing patients in their most dire need.”

Jennifer said she was drawn to CU Pharmacy because of the school’s experienced faculty and engagement with policy decisions. Additionally, Nicholas said the school’s strong emphasis on clinical pharmacy was a factor in his decision.

On top of that, there was this: “We decided to go where we could go together,” Nicholas said.

Next year, they will continue their journey together.

Jennifer, who earned a scholarship with the Health Profession Scholarship Program (HPSP) in the U.S. Air Force, served as Lieutenant during pharmacy school. In April, they were waiting for Jennifer's orders from the Air Force to determine where they will move next.

She will be a Captain working within clinical and outpatient pharmacies on base.

The couple said Nicholas made the difficult decision to postpone residency training in order to have a flexible work schedule that optimizes his family time with Jennifer and their new baby.

He is excited to be able to spend more time with his growing family, especially during these uncertain times.