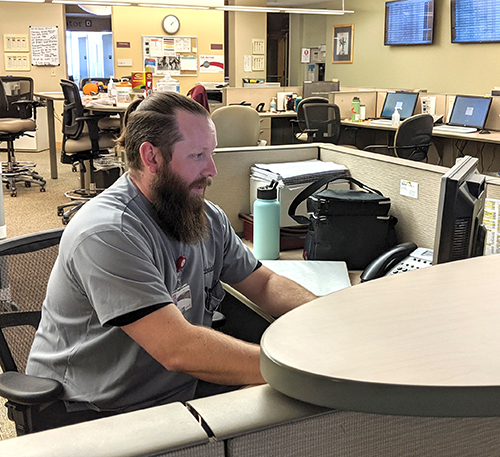 Growing up, Eric Hartsfield never thought he would go on to study pharmacy. In fact, he spent half of his life working in retail — a field he fell in love with and imagined sticking with.

But even as his career took a different direction early on, Hartsfield had a deep connection to pharmacy. He came from generations of pharmacists: His mom has a PhD in pharmaceutical sciences and worked weekends as a pharmacist at Walgreens. His great-grandmother opened the first licensed pharmacy in Virginia, his grandfather continued the tradition by owning a pharmacy and his aunt is currently a pharmacist at the Department of Veterans Affairs in Florida.

It’s safe to say that Eric's connection to pharmacy had roots. As his career interests eventually shifted away from retail, he was drawn to studyingscience, and not long after that, the family industry.

In 2017, he had enough pre-requisites to enter the CU Skaggs School of Pharmacy without a bachelor’s degree. By 2021, he will be a fourth-generation pharmacist and the first in his family to earn a PharmD.

“You hear a lot of your friends and peers say, ‘Oh, I don’t want to do what my family did,’” he said. “But continuing what my family does just felt like the right thing to do.”

Even though he’s following a family tradition by pursuing pharmacy, he is taking a different approach to the field. Eric is particularly passionate about working in a hospital setting.

Because he already had experience working in a retail setting and was seeking a different work environment, Hartsfield said he was eager to explore other ways he could study pharmacy.

“When I got into school, I was really interested to keep my ear to the ground about what’s available outside of community pharmacy, not that I have a
problem being there, I just knew that I already had that experience,” he said. “I lucked out and got an internship at a hospital. As a hospital intern, pharmacist, I get to do all kinds of cool stuff.”

As part of his internship at the University of Colorado Hospital, his duties range from sterile compounding to helping pharmacists monitor antibiotics.

“When you really start thinking outside of the box, you recognize that pharmacy is the concentration of drug knowledge — it’s not only what is
the drug and what it’s used for. But it’s what is the drug, how does it work, how long does it
stay in your system, how is it metabolized in your system, what are the dangers of that drug, can it be effectively used in a specific
patient?”

It’s a message he wants other students interested in pharmacy to consider.

In his opinion, there’s more to pharmacy than most people think.

“Everything the doctors do is great and they’re really awesome at diagnosing, but they don’t get to spend half of the amount of time that we will spend learning about drugs and medication,” he said. “Because of that, we are really, really useful in a lot of areas that I think haven’t necessarily been gotten to yet.”

Once he graduates, Hartsfield has his mind set on working in a clinical hospital setting, potentially in a rural setting that doesn’t currently
have access to health-system pharmacists.

But for now, Eric is hard at work studying at CU Pharmacy. When he studies, he often reads what he’s learned out loud to his daughter, Elizabeth, 3.

His family connection to pharmacy might just continue to a future generation.