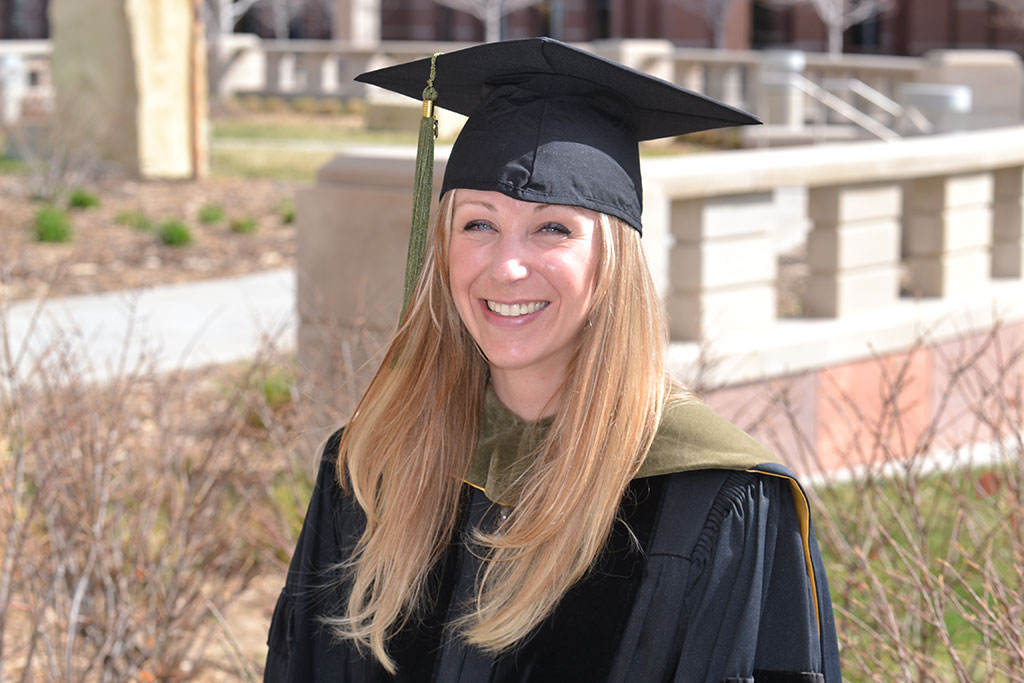 Home / News / The Company That You Keep

This year, the University of Colorado Skaggs School of Pharmacy and Pharmaceutical Sciences will confer 200 doctorate degrees. It’s not just about the destination, it’s about the journey and the company you keep along the way.

From clinical skills award winners to a starving artist, an Iraq war veteran and a former postal employee – our graduates are the best in the nation.

Learn what sets them apart.

For Kalee Paulson, illustrating and animating disease states, organs, mechanisms and concepts, comes naturally.  Her class notes are a combination of doodles, cartoons and sometimes full-fledged works of art. “It’s just the way my mind works,” says Kalee. Fellow classmates even found her illustrations easier to understand than their traditional class notes.

Prior to pharmacy school, Kalee was an underemployed graphic artist working full-time at the University of Colorado Hospital’s Cancer Center managing the infusion center. “I was trying to complete my second undergrad degree in marketing to complement my first degree in multimedia graphic design.”

Then one day one of the pharmacists at the Cancer Center suggested she look into pharmacy school and the seed was sown. “My immediate response was, ‘that’s impossible. I have no background in science or math.’ But working with the infusion team I found that I really wanted to be a part of healthcare.”

So, she embarked on a journey that would challenge her and take both her left and her right brain to complete.

She began researching the necessary qualifications to become a pharmacist. She started taking pre-requisite courses, which as you can imagine, were a little daunting for someone who had not enrolled in a science class since high school! But she took them anyway and discovered, “there’s an art to chemistry and medicine that I never realized.”

At first glance, the two disciplines – art and science -- seem like strange bedfellows; even polar opposites.  Both with their own distinct language. But art has a universality that transcends the complicated jargon of science. “No matter what language you speak, or level of education you attain, art is something you can use to help others understand.” Acting as an interpreter/translator, art has the ability to “bridge the gap that often occurs when conveying diseases, science and treatment. In fact, you can draw something and the audience knows exactly what it is,” says Kalee.

After completing her pre requisites, she applied to CU’s pharmacy program and was accepted. “That was the biggest day of my life! And what a confidence booster.” And for four years she’d dedicated herself to science, but has also thrown in a little art every once in a while.

“Art is my release. But not my career. It’s something I turn to if I need to get away. I still paint and draw, but I’m not trying to make money off of it.” She even designed bicycle jerseys that the school’s team wore during the American Diabetes Association’s Tour de Cure Colorado bicycle event.  “It was fun to use the other side of my brain to get classmates excited about the team.” The jerseys were so attractive that people signed up just to get a jersey and the team had its biggest numbers ever!  “That’s the power of creating something that looks professional and is wearable.”

Upon graduation, Kalee will be taking her artistic skills up with her to Cheyenne where she will be doing a PGY-1 residency at Cheyenne Veterans Affairs Medical Center.