Home News Would You Like a Sundae With that Prescription? back to News

It has slipped from some memories, according to the surprised expressions of people who walk in this front door. Despite the sign out front and despite the smell of fresh waffle cones mixed with the distant sight of pill bottles, visitors are repeatedly confused about what’s offered here.

Yes and yes. This is Salida Pharmacy & Fountain. In the back is a fully-functioning independent pharmacy run by pharmacist Lucas Smith. To get to the counter, you’ll pass by the soda fountain, where ice cream, sundaes, milkshakes, sodas and egg creams are on the menu. That part is run by Jill Smith. 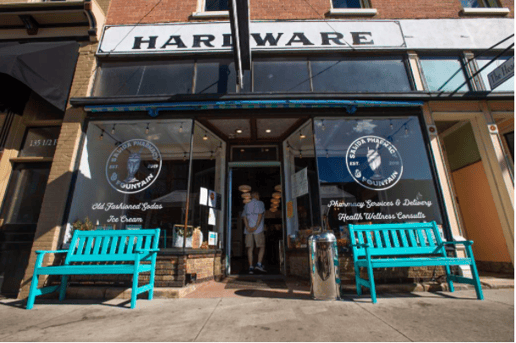 The husband and wife, both 33 and both from Colorado Springs, opened this shop in downtown Salida in November 2019 as an ode to old-fashioned pharmacies, the kind that came equipped with soda fountains starting in the 1850s. By the 1920s, “almost every drugstore had a soda fountain,” according to an article by pharmacist Karen Berger.

Lucas Smith knows this history well. Throughout his studies at the CU Anschutz Skaggs School of Pharmacy and Pharmaceutical Sciences, he heard how pharmacies and soda fountains originally got together because, he said, “the soda water and sweet syrup were used to mask the flavor of medications.” In other words, the words of Mary Poppins, a spoonful of sugar really does help the medicine go down. And pharmacies helped the soda industry go up.

It was pharmacists who invented the drinks we know as Coca-Cola and Pepsi. But as decades passed, the two industries seemed to drift apart. A trip to the pharmacy today might include grabbing a bottle of soda from the cooler while checking out at Walgreens. Or you might go treatless while running through the drive-thru pharmacy. Smith figured he’d work for one of those big box stores. Then he was charmed by the pros of independently-run pharmacies. He could own a pharmacy and provide more personal care.

He and his wife moved to Buena Vista in 2014 to help turn business around at Buena Vista Drug, which they took over in 2017. Then they heard about a historic building, built in 1884, available in downtown Salida. It seemed like the perfect place to walk back in time.

“So many people want the nostalgic feeling,” Jill Smith said. “It brings back good memories.” 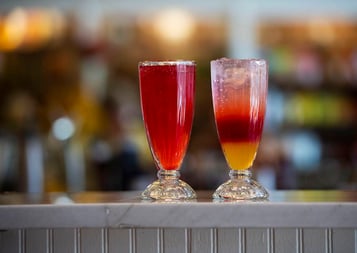 It’s also a place for new memories. When they opened, the soda fountain side took off. Serving ice cream from the Colorado Springs-based Blue Mountain Creamery, stand-out menu items bring in a steady flow of locals and tourists.

“In the summer, it’s rare to not have a line out the door,” she said.

Their sundaes stand out the most. A full-size is with three scoops of ice cream and “meant to be shared,” Jill Smith says. There’s a s’mores option and one topped with hot fudge and bacon peanut brittle. Another comes with bruleed Twinkie bars.

It’s been an odd time to open a new business, especially for the couple with two young daughters, but a fitting time to be the new pharmacy in town. Lucas Smith said he was surprised to get a batch of COVID-19 vaccines in the mail in January. He’s still giving vaccine shots on most days. During stricter pandemic restrictions, he delivered prescriptions to customers at home. They also offered to-go ice cream sundae kits.

“Here, you’ll get things you wouldn’t at a big box store,” he said. “It’s more personalized care. And we’re willing to go the extra mile.” 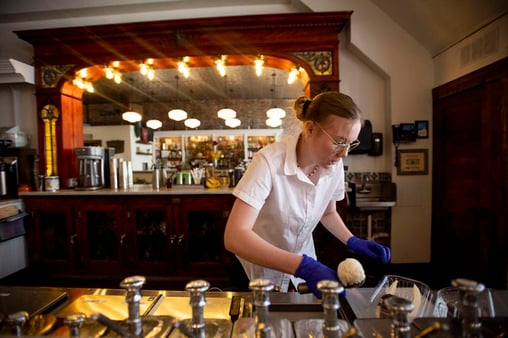 That’s on display when visiting Salida Pharmacy & Fountain. Between the two of them, they’d be able to remind a regular when their prescription will be ready and prepare their go-to ice cream order. Also on display is a beautiful bar back they bought from a pharmacy that closed in Del Norte. The 1920s piece is made of dark wood and stained glass. In the middle is a large mirror so you can watch yourself dig into an ice cream sundae. You’ll also see something you wouldn’t at most pharmacies: People just hanging out. It’s a place families stop after school and for first dates.

“It gives this town another community space,” Jill Smith said. “Everybody hangs out a coffee shop, but sometimes you wanna say, ‘Let’s grab some ice cream.’”