In the 1860s, French physician Armand Trousseau noticed that patients with a certain form of abnormal blood clotting often went on to be diagnosed with pancreas or gastric cancers. Unfortunately, at age 66 he noticed these same symptoms in himself and died of gastric cancer only a few months later. Since then, this abnormal clotting known as a Trousseau sign of malignancy has been seen as a reason to look closely for cancer, but that is where the story of coagulation and cancer ended. That is, until recently when researchers at University of Colorado Cancer Center dusted off this 19th century observation to explore what else blood coagulation could tell us about the course of a patient’s disease. 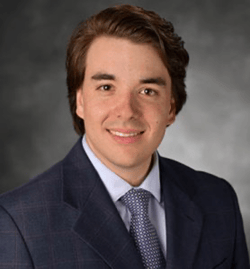 “What is the link between cancer and coagulation and is there something in the coagulation profile of a patient with cancer that we can use to predict how they will do?” asks Alex Schulick, MD, recent graduate of the CU School of Medicine and first author of a paper in the journal Annals of Surgery exploring these questions.

The answers may be especially important in pancreas cancer. This is because may pancreas cancer patients and their doctors face the difficult decision whether or not to pursue surgical treatment. Up to 20 percent of patients treated with surgery will be alive 5 years after diagnosis. Without surgery, the 5-year survival rate is only one percent. However, many pancreas cancers are diagnosed only after they have become entangled with nearby organs and blood vessels, or when the cancer has already spread, making surgery more complicated or not recommended.

“Imaging and current tests aren’t good enough to tell us which pancreas cancer patients should go into surgery despite having extensive disease. There’s nothing that can tell us that,” Schulick says.

Because we can’t predict the course of the disease, some pancreas cancer patients undergo difficult surgeries from which they receive no benefit, while other patients forgo surgeries that could have significantly lengthened their lives.

In 2015, Hunter Moore, MD, was a postdoctoral fellow specializing in trauma, with a grant from the CU School of Medicine Department of Surgery to explore coagulation in liver transplant patients. “And at the same time, we knew the story of hyper-coagulability in cancer. We had a little money left over from our grant and decided to use it to look at pancreatic cancer,” Moore says. 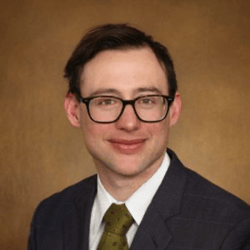 He used a test called thromboelastography (TEG), which measures the ability of whole blood to form a clot. Moore recruited 100 patients being evaluated for suspicious masses and in 2018 published a paper showing that TEG results could predict not only which masses were cancerous, but the stage of the cancer, as well.

“Now we’re three years out and Hunter brought me into the project to look at long-term outcomes of survival and recurrence,” Schulick says. In other words, could TEG results predict who would remain cancer-free and who would relapse three years after treatment?

“We started to think, hey, maybe we can draw blood prior to surgery and see what their TEG is and use that in our arsenal in deciding whether to pursue surgery,” Schulick says. “Imagine a patient comes in, gets a CT scan, and their pancreas cancer looks pretty involved. But we draw blood and TEG is low – maybe that patient looks like a better surgical candidate. Maybe this could tip the scale in favor of going to surgery.”

“Beyond that, there are potential therapeutics in this,” Moore says. According to the researchers, blood coagulability may not only predict the course of cancer, but high coagulability could be driving the aggressiveness of the disease – perhaps helping pancreatic cancers thicken the sac called a desmoplasia that surrounds the tumor and can protect it from treatments. “Down the line, we want to look into whether treating some factor of blood coagulability could help us treat these cancers,” Moore says. 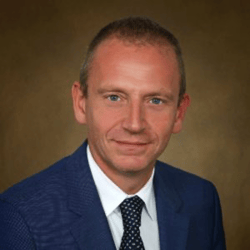 “This could have an extremely big impact in defining who should go to surgery based on their chance of recurrence,” says Marco Del Chiaro, MD, CU Cancer Center investigator and Chief of the Division of Surgical Oncology at the CU School of Medicine. “This new data seems to define prognosis better than the marker we’re using worldwide now. And it’s actually a very easy test. Many people are investigating expensive biomarkers, but this could become available everywhere, easily. This research could have measurable impact and comes from a medical student and a resident-then-fellow – a sign that we have truly excellent, motivated young minds working here in Colorado.”

“As a medical student just getting my feet wet with science, I wouldn’t have been able to join this project without Hunter and Dr. Del Chiaro – the meetings, the learning, just figuring out how to do science as a clinician. I feel so lucky,” says Schulick, who recently started his residency at Johns Hopkins University.

Meanwhile, the team at CU recently earned approval for a clinical trial testing TEG score as a prognostic factor in pancreatic cancer, possibly paving the way for this simple blood test, based on a long-overlooked connection between coagulation and cancer, to help make the potentially life-saving decision of who is most likely to benefit from surgery in pancreatic cancer.