There’s never a good time for a cancer diagnosis, but it’s especially difficult in the middle of a pandemic, when concerns about safety compound the worry and anxiety that come along with hearing, “you have cancer.”

That was the position Tom found himself in in the spring of 2020, when an at-home colon cancer test showed the possible presence of a tumor. His doctor insisted on a colonoscopy, and the cancer was caught early. That’s when he was referred to Martin McCarter, MD, of the CU Cancer Center and the CU Department of Surgery for an operation to remove the tumor. That surgery took place at the University of Colorado Hospital, the clinical partner of CU School of Medicine.

“By that time, the fear of having cancer was driving me a little bit more urgently than worrying about COVID,” says Tom, who did the at-home colon screening shortly after turning 50. He says he still had concerns about exposure to the coronavirus during both the testing for and treatment of his cancer, but “all the safe distancing and security measures as far as mask-wearing and all that kind of stuff had been introduced” in both instances, he says. “In my mind, everything was very well adhered to and taken care of as far as mitigating any risks from COVID.” 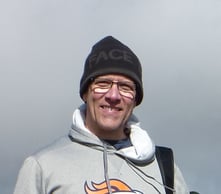 Tom says safety procedures in the

hospital eased his fears around

McCarter says Tom did everything right when it came to his screening and the follow-up testing and treatment.

Had Tom waited, McCarter says, the outcome could have been much worse. He urges people to continue with their regular screenings even though the COVID-19 pandemic is still going on.

“Cancer doesn’t take a break, so we shouldn’t take a break either, on our screening,” McCarter says. “It’s good health practice to get the recommended screening for colon, prostate and breast cancer at the recommended times, because those screening programs are designed to catch cancers either at a precancerous or very early cancer stage where they are very curable with minimally invasive or less invasive procedures.”

Tom says he’s happy that any worries he had around COVID-19 didn’t prevent him from getting the care he needed in a timely fashion. He knows any delay could have made things worse.

“The hospitals, doctors and staff all seem to know how to deal with it,” he says. “A lot of the risk has been removed. Temperature checks, masks, distancing, all that stuff was well-handled. There was never a point where I thought, ‘I’m being exposed to sick people that are putting me further at risk.’”

As hospitals, clinics and doctors’ offices all are taking additional precautions to protect against the COVID-19 virus, McCarter says patients shouldn’t worry too much about exposure while getting screenings or treatment. “There have been few, if any, documented transmissions of COVID-19 in doctors’ offices, and I would hazard to say even in hospitals,” he says. “Back in the spring there were many unknowns about the virus, but now we have a better handle on how to prevent transmission of the virus through proper PPE, isolating COVID-19 patients, minimizing contact and other safety measures.”

Good and bad news about postponing

During the virus’ first wave, some screenings and treatments were scaled back while medical professionals figured out how to handle the scenario. Things got back to normal over the summer, and now, even though the number of COVID-19 cases is again on the rise, doctors are better prepared to deal with the pandemic, McCarter says. Still, some patients have requested to postpone surgeries out of an abundance of caution.

“There are some things we can do to postpone surgery for cancer patients — for example, we can prolong a period of chemotherapy before an operation — but ultimately the operation needs to be done because it is still the one chance for a cure,” he says. “Yes, we can postpone, but it’s not always in their best interest to do so. Somebody with a new diagnosis of rectal cancer, they’re going to need chemotherapy and radiation therapy. We can sequence that in such a way that we can postpone their operation and still effectively treat their tumor, but there are other tumors for which there aren’t good treatments like that, and for which surgery really is their only option.” 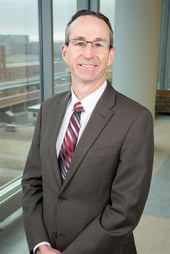 “People may have symptoms and not want to go to the doctor and by the time they don’t have any choice or it’s too symptomatic, then it’s too late,” he says. “A delay could mean there is a chance the tumor has evolved to stage 4 and they are no longer curable.”

“A lot of the risk has been removed”

Tom’s message to others is that it’s important to go through with testing and treatment despite worries over COVID-19.

“My experience around COVID is to take the precautions that have been communicated and advised to people, and hopefully you’ll be in good shape,” he says. “The hospitals and the doctors and the staff, they all seem to know how to deal with it. In my mind, a lot of the risk has been removed.”