For Isaiah Richardson, conducting research as an American Cancer Society Diversity in Cancer Research Intern this summer was an important academic and professional experience, but it was also personal.

His grandmother was diagnosed with Hodgkin lymphoma and a cousin with non-Hodgkin lymphoma, “so cancer’s been sort of this cloud hanging over my family,” Richardson says. “This was a chance for me to do something proactive about it rather than wait for something bad to happen.”

Richardson, a sophomore psychology and pre-med major at Xavier University in Louisiana, was one of six undergraduate students who participated in the recently completed, 10-week American Cancer Society Diversity in Cancer Research (DICR) internship program at the University of Colorado Cancer Center. DICR is an American Cancer Society (ACS) program that aims to support students from traditionally underrepresented minorities in cancer research and mentorship. 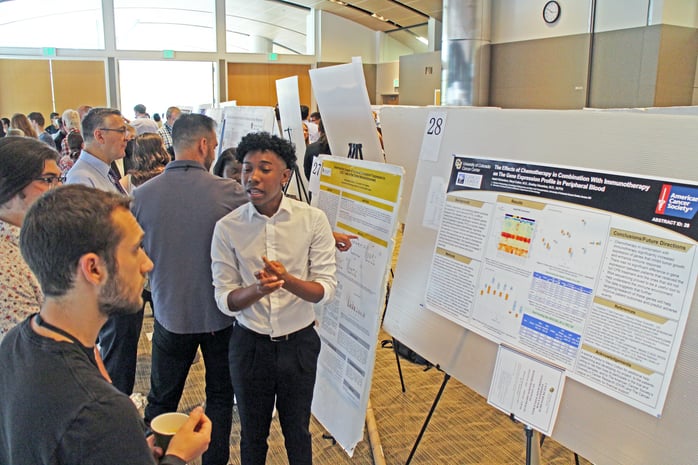 Isaiah Richardson, center, discusses his research during the culminating poster session for the Diversity in Cancer Research summer program.

The ACS contacted institutions that have an IRG and invited them to apply to participate in the DICR internship program. The ACS launched the DICR program last summer and the University of Colorado was chosen as one of the eight inaugural sites to host DICR students, matching four undergraduate participants with CU Cancer Center mentors to do two months of laboratory research.

“The main goal is to introduce participants to research as a career option and support their interest in a career in science or medicine early on,” explains Richer. “If they decide to pursue cancer research, of course we’d love that, but really it’s about supporting them in any area of biomedical research.”

This year’s six interns came from universities in Colorado and around the United States. Out-of-state students were offered housing, and an additional $6,000 per student from the Cancer League of Colorado combined with a $5,000 stipend from the ACS provided participants with support consistent with other summer programs on the CU Anschutz campus.

The ACS DICR dovetailed with the Cancer Research Experience for Undergraduates (CREU) program, which is funded by a National Institutes of Health R25 grant to Mary Reyland, PhD, with Tentler as co-director. Participating interns attended twice-weekly lectures from oncology scientists and clinicians, as well as clinical translational workshops and career development roundtables with faculty, graduate students, and medical students. DICR and CREU students shared the culminating poster session.

“The goal is to support students who haven’t yet been exposed to research and accommodate them in pursuing topics they are interested in,” Tentler says. “We give them a list of labs and they pick which science sounds interesting to them. Because it’s a relatively short period over the summer, they usually do a piece of an existing research project and then they may make a contribution toward a publication.”

A key piece of DICR is working with mentors who are established and experienced in cancer research. “We actually send out an email to all CU Cancer Center members and ask if they’re interested in helping the next generation of cancer researchers,” Richer says. “Because we don’t have undergraduates on the Anschutz campus, it gives trainees in our labs an opportunity to mentor undergraduate students at a really important point in their career development. It is mutually beneficial – both for the summer students and for our graduate students and post-doctoral fellows to get mentoring experience.”

“It’s always exciting to have students in the lab during the summer,” Ihle says. “The thing that’s wonderful about this internship program is it’s not just busy work, but real research. Johana’s going to be a co-author on my paper and she did some really outstanding hypothesis-driven research.”

For Canari, a freshman mathematics and pre-med major at Case Western Reserve University in Cleveland, Ohio, the summer research internship allowed her to take a deep dive into breast cancer bone metastasis and the tumor microenvironment. She studied how breast cancer patient bone metastases have altered gene expression compared to the patient’s primary tumor. “Johana was able to prove that there are significant changes in the RNA from a patient’s two tumor sites – their breast tumor and their bone metastasis,” Owens says. “It’s amazing to see her studies reveal unique genes that could be targeted to help us better treat metastatic disease.”

While a small portion of Canari’s samples ended up not showing significant differences, other patient samples did show differences that are significant discoveries for the research. “I’m seeing how that’s part of the research process and how we can learn just as much when a hypothesis is disproven,” Canari says. “If anything, I’m even more excited now about research.”

Richardson worked with faculty mentor and CU Cancer Center member Brad Haverkos, MD, an associate professor of hematology in the CU School of Medicine, on research studying T cell lymphoma and immunotherapy. Specifically, Richardson looked at the effects of chemotherapy in combination with immunotherapy on the gene expression profile in peripheral blood.

“We had 55 peripheral blood samples that were stored at -80° C and we came up with three panels that we assessed for T cell function,” Richardson explains. Though previously he’d participated in biophysics research at Johns Hopkins University, this was his first experience delving into gene regulation and RNA sequencing.

Ultimately, Richardson would like to pursue cardiothoracic surgery, “but after this experience I know that research is something I’ll always be interested in doing,” he says.

The DICR program isn’t designed only for students interested in becoming doctors, Richer says, “but for anyone interested in research. Whatever they decide to do with their bachelor’s degree, whether it’s graduate school for basic science research or medical school or entering the biotechnology industry, so much research has shown that the entire scientific community benefits when people are diverse and represent the broader population. Representation is important because it enhances the pool of role models to bring more young people into STEM fields and drives new discoveries. ”