Home News Giving Beyond the Norm back to News

Like most people, Arnette Schouten has been touched personally by cancer. One of her cousins is in hospice following a battle with melanoma; her sister-in-law had a long fight with breast cancer; and Arnette herself had early symptoms of ovarian cancer that were caught in time for effective treatment.

But her reasons for donating to the University of Colorado Cancer Center have less to do with her personal history and more to do with the wide range of ages cancer affects and the many rare forms of the disease. 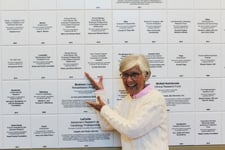 “It’s such an awful thing,” she says of cancer. “And it doesn’t affect just old people, but you see the babies and the young kids fighting it. I think it would be so awesome if that was one thing we could just get rid of.”

Arnette has a long history of giving on the Anschutz Medical Campus. Her first major gift was to the UCHealth Burn and Frostbite Center, which helped her husband, Jerry, after he was badly burned in a race car crash. He later died from his injuries. Part of Arnette’s gift allowed UCHealth to purchase computers that let patients communicate via eye-tracking technology. Jerry, who loved conversing with his wife, spent his last days on a breathing tube, unable to speak. Arnette wanted that gift to help future intubated patients better communicate with their loved ones.

At the CU Cancer Center, Arnette’s generosity has helped fund research into solid tumors and rare melanomas, as well as investigator-initiated trials (IITs), which advance “homegrown” ideas from researchers and investigators who are active in lab and clinical settings. Unlike trials that are initiated by sponsors such as pharmaceutical companies, IITs start in research sites such as the Cancer Center.

Richard Schulick, MD, MBA, director of the CU Cancer Center and recipient of the Aragón/Gonzalez-Gíustí Chair, says he is thankful for Arnette’s support, especially when it comes to her gifts supporting research into rare melanomas.

“We’re one of the top rare melanoma centers in the country,” he says. “A lot of people come to us, we have clinical trials, and for a lot of these rare melanomas we’re not quite sure what to do. We’re investigating and doing clinical trials and trying the new immunotherapy agents and seeing whether they work. We’ve had a huge push in immunotherapy over the past couple of years, and there are some really promising therapies that we’re setting up.”

In another of the areas Arnette supports, tumor research, Schulick says enormous progress has been made in recent years as medical researchers discovered how to use genetic information to more accurately treat cancer.

“The thinking used to be that, for instance, pancreas cancer is one disease, and everyone who has it should be treated the same way,” he says. “And it didn’t get great results. When the ability to actually read the genes in humans and in cancers came about, we started finding out that whether it’s pancreas cancer or melanoma — there are a thousand different diseases. The trend now is studying the genes of each cancer, categorizing them by whatever the genetic changes are, and if they have these genetic changes, they should receive this therapy. It doesn’t matter if it’s melanoma or pancreatic or gastric or ovarian — if they have these genetic changes, they should get this treatment.”

Arnette says it’s important to her to focus her giving on rarer diseases that have a high funding need.

“There’s a lot of money and attention going to things like breast cancer, but we need to look at other stuff,” she says. “The rarer it is, the harder it is to figure out. That’s where we need to start in order to bring these diseases to light and to figure them out. See what the genetics are for something that we don’t know. Let’s do some more research and see where that can go.”