January is Cervical Cancer Awareness Month, and CU Cancer Center member Lindsay Brubaker, MD, wants everyone to be aware of the relationship between cervical cancer and the human papillomavirus (HPV), a sexually-transmitted disease that causes the vast majority of cervical cancers. The current HPV vaccine protects against seven predominant strains of the virus that cause cancer, as well as the two that cause genital warts.

“More than 99% of cervical cancers are due to HPV,” says Brubaker, a gynecologic oncologist and assistant professor at the University of Colorado School of Medicine. “The HPV vaccine has the potential to change the course of cervical cancer globally if we use it correctly. The problem is it’s not easily accessible to the majority of the world, and in the United States we haven’t prioritized it.” 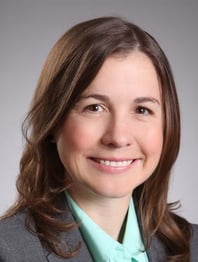 Since the vaccine was approved by the CDC in 2006, there have been many changes to how HPV vaccinations are recommended to be administered. Brubaker shared three things she wants people to know about the HPV vaccine and recent updates.

You can get the HPV vaccination up to age 45

“Routine HPV vaccination is recommended at 11­­–12 years,” she says. “HPV is ransmitted sexually, so if you can administer the vaccine before a person is sexually active, that’s when it will have the highest efficacy. Unfortunately, there are a large number of women who have cervical dysplasia, which is the precancerous process that happens in the cervix, and have never had the HPV vaccine. And they say, ‘I missed the window to get vaccinated.’ While it is optimal to get it before sexual debut — that’s what the Centers for Disease Control recommend —there is plenty of benefit, particularly for people with risk factors like a history of HPV or abnormal pap smears, to get the HPV vaccine in their 20s, 30s and 40s.”

Women who were not vaccinated in their teens can talk to their primary care provider or OB-GYN about getting a catch-up HPV vaccination. They will discuss any potential side effects (typically limited to injection reactions alone) and the benefits that would come from receiving the vaccine.

Even someone who is positive for one strain of HPV will benefit from the vaccine, Brubaker says, because it will protect them from other strains. “If you have HPV 16, it’s not thought to be therapeutic for the HPV 16 strain; however, it will prevent you from getting other high-risk strains such as HPV 18, 31, 33 or 45.”

It’s important for men to get it as well

It is a common perception that HPV only affects women, but that is not the case. This may have come from the initial advertising of the vaccine as a way to prevent cervical cancer.

“In the United States, we are not good at encouraging the HPV vaccine,” she says. “There are places like Australia where they have initiated schoolwide mandatory vaccination and seen dramatic falls in HPV prevalence. Because of this intervention, experts believe that within 20 years cervical cancer could be eliminated as a public health problem in Australia.”

According to the Centers for Disease Control and Prevention, nearly 80 million Americans are currently infected with HPV, making it the most common sexually transmitted infection. It is estimated that around 14 million Americans will become infected each year. Most of those infected are in their late teens and early 20s. There is good evidence that being vaccinated against HPV does not alter sexual practices, regardless of age.

For parents concerned about vaccinating their children against a sexually-transmitted disease at such a young age, Brubaker offers this advice:

“The point is that HPV is ubiquitous and sexual activity is inevitable,” she says. “If there are things we can do to decrease the future cancer risk for our children, and it’s as low-risk as a vaccine that’s well tested and confirmed to be safe and efficacious, it’s one of the best things you can do. And, importantly, it remains an option up to age 45. The number of patients that I have that come in disappointed because they feel like they’ve missed the window for the HPV vaccine, it’s just crazy.”