Doctors would like to use all sorts of nanoparticles in the body, for example to construct detailed images of anatomy and disease, and to deliver cancer-fighting drugs deep within tumor tissue. However, millions of years of evolution have equipped the body to identify and reject foreign particles, even nanoparticles. And so one major challenge in the use of nanomedicine has been the immune system’s unfortunate efficiency in responding to what it sees as infection, at best clearing nanoparticles before they can accomplish their goals, and at worst, leading to dangerous immune overreaction that creates side effects and serious risks.

A University of Colorado Cancer Center study published today in the journal Nature Nanotechnology describes an important step in the activation of the immune system against nanoparticles. The finding may allow researchers and eventually doctors to cloak nanoparticles against the immune system, allowing these particles to go about their therapeutic business.

Previously, the lab of CU Cancer Center investigator Dmitri Simberg, PhD, has shown that blood proteins (collectively called protein corona) coat nanoparticles, marking them for immune system attack. In particular, the Simberg lab showed that one of the most important components of the immune system, namely the complement system, cannot attack nanoparticles unless they are coated with protein corona. Now the Simberg lab shows another step in this process: Natural antibodies within the protein corona are responsible for the ability of the complement system to recognize and attack nanoparticles.

The study, which was done in collaboration with Moein Moghimi, PhD, Professor at Newcastle University in the UK, looked at the ability of a prevalent complement system protein, known as C3, to find and attack widely used nanoparticle-based anti-cancer pharmaceuticals LipoDox and Onivyde, (as well as the nanoparticle-based iron oxide supplement Feraheme). When Simberg and colleagues depleted antibodies known as immunoglobulins from blood of healthy donors and cancer patients, the ability of C3 to find and mark these nanoparticles was reduced 70-95 percent. When the team restored immunoglobulins, they again saw C3 buildup on these nanomedicines. 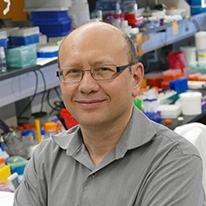