Home News The Impacts of Aging on Cancer back to News

For more than a year, a working group at the University of Colorado Cancer Center has been studying the many ways the aging process impacts cancer — including incidence, progression, and prognosis of the disease, therapeutic options and outcomes, and the psychosocial aspects of living with cancer.

“Ninety percent of all cancers happen after age 50, and it increases exponentially after that,” says working group leader and CU Cancer Center deputy director James DeGregori, PhD, editor-in-chief of a new journal on cancer and aging. “Most people get cancer when they’re old, and the older you are, typically the worse your outcomes are.”

The Aging and Cancer working group includes researchers from the Anschutz Medical Campus, University of Colorado Boulder, and Colorado State University who meet regularly to share research, exchange information, propose cross-disciplinary collaborations, and even to fund projects aimed at learning more about the influence aging has on getting, fighting and beating the disease.

Understanding the evolution of cancer

For DeGregori, it’s a research interest that has lasted for more than a decade. He is particularly interested in why older bodies favor the development of cancer. 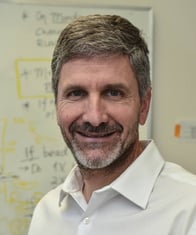 “We are asking, ‘Why is it that someone who is more frail is more likely to get cancer?’” he says. “What is it about their body? Is it that their immune system is failing? Is it that the landscape of their tissues is more conducive to the evolution of cancer? If we understand what factors associated with getting older increase the chance of getting cancer, maybe we could develop interventions to counteract this aging-associated risk.”

Conventional cancer wisdom says the reason we get more cancer in old age is because we get more mutations, but DeGregori’s latest research shows there’s more to it than that.

He says it’s not unlike the evolution of life on earth, which has been driven more by environmental change than by mutations. To prevent cancer, it’s important to better maintain the environment in the body by not smoking, eating well, and exercising.

DeGregori and his team are now looking at ways to treat cancer by maintaining and restoring the body’s tissue environment.

“We’re learning that one of the ways you do that with therapy is by not screwing up the environments in the first place,” he says. “A lot of the more conventional therapies are incredibly toxic. They’re just devastating to a tissue environment. Sure, they kill the cancer cells, but they leave a devastating landscape. And that allows for the cancer to come back.”

His research is looking into the success of less-toxic therapies that cause deeper and longer remissions by preserving much of the tissue environment. His team also is developing interventions to prevent aging-associated cancer development, many of them anti-inflammatory treatments that partially restore the youthfulness of tissue.

“Inflammation is known to go up as we get older, and we’ve shown that when we dampen that inflammation, we can also dampen the cancer evolution that would normally happen in some of our tissues,” he says. “You might think we should all be taking anti-inflammatories, but anti-inflammatories have side effects. They can increase the risk of infection. If we can figure out how to do this in a more subtle way — not completely dampen down inflammation, but just bring it down to youthful levels — then we will have achieved our goal.”

Three projects were each awarded $50,000 for the inaugural year of the aging and cancer grants.