Kirsten Stewart was just putting on lotion, like she does every morning after her shower. That particular morning, though, she noticed something different: a lump that hadn’t been there before and that definitely wasn’t normal. She was only 30 years old.

“I freaked out a little bit,” she recalls. “I ran downstairs and made my husband feel, and right away he said we should call the doctor.”

What began in February 2019 has become a more than two-year breast cancer journey that Stewart has navigated with her family, with a multidisciplinary team at the CU Cancer Center and the Diane O’Connor Thompson Breast Center, and with a newfound drive to educate and advocate for younger women being screened for breast cancer.

“I want to tell every woman I know, and especially younger women, to know your body – know when you feel good and know when you don’t feel very well,” she says. “You want to know what your breasts feel like and what’s your normal, and don’t just brush it off if you feel worried or concerned or if you have a family history of breast cancer.

“I didn’t have any genetic factors and I don’t have a family history, but I knew something wasn’t right.”

Waiting for a diagnosis

In regular times, Stewart’s “normal” is about 90 miles an hour. She and her husband of six years, Doug, have four children – Stewart adopted her husband’s three children from his first marriage – ages 16, 14, and two 12-year-olds. Their life together is a whirlwind of 4-H, sports practices, and hiking on the weekends. 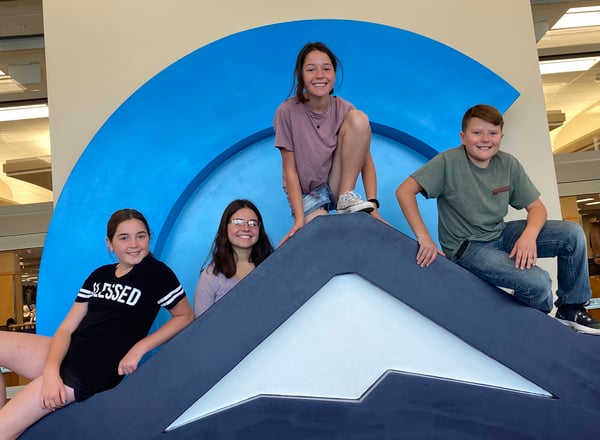 When she’s not working as a judicial assistant in the 9th Judicial District in Glenwood Springs, Colorado, Stewart is on the go, working out to maintain her sanity and navigating a “house filled with raging hormones,” she says with a laugh.

She’s always made a point to listen to her body. When she felt a lump in her left breast, she knew it shouldn’t be there. An agonizing weekend followed, and first thing the next Monday, she called her primary care physician.

At an appointment several days later, a mammogram precipitated an ultrasound, which revealed a mass concerning enough that her physician asked her to return for a biopsy that same afternoon.

“And that’s when you kind of know, like, crap,” Stewart recalls. “Waiting for the biopsy results took for-EVER. That was the longest week and a half of my life. I really don’t even know how I coped with it. I went to work every day and took care of my family, but in the back of my mind the anxiety was always there.”

Her physician called her as she was heading into the courtroom to prepare it for a hearing. It was the news she didn’t want to hear: breast cancer. She opened the courtroom, then asked another division clerk to cover for her. She held it together until she got home and told her husband.

“We were both in shock,” she recalls. “It was a huge blow, and it was our daughter’s 10th birthday. We were having a party that night, so we decided to wait to tell the kids until we had more information and a game plan. I learned pretty quick that Google is not your friend.”

Originally, she was referred to an oncologist in Glenwood Springs but couldn’t get an appointment for several weeks “and I wasn’t having it,” she says. “The next day I asked my doctor to send my referral to (the CU Cancer Center at) Anschutz.”

Beginning a course of treatment

“When she first came to see us, we recommended she start chemotherapy and then began to have the conversation about different surgical options,” says Sarah Tevis, MD, a CU Cancer Center member and assistant professor of surgical oncology who performed Stewart’s cancer surgeries.

However, Stewart had developed a significant infection at the site of her biopsy – so serious that she developed an abscess and spent several days in the hospital – “so now she had an open wound and we were talking about starting chemotherapy, which is immunosuppressive,” Tevis says. “We had to regroup and factor that into the multidisciplinary discussion.”

Stewart had also been working closely with Virginia Borges, MD, a professor of medical oncology and CU Cancer Center member, “and I remember calling her in a panic because the wound had gotten so bad that what I thought was tissue was actually the tumor and I could see it when the wound was unpacked,” Stewart says. 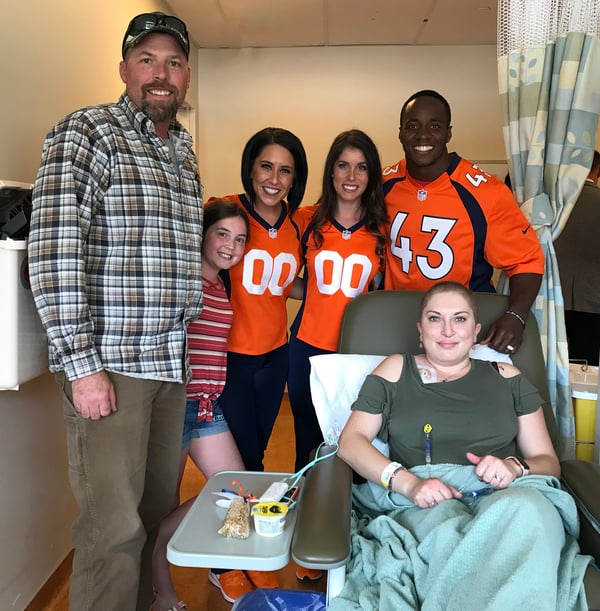 “I know they discussed it as a team, and I had two options: If I was going to do surgery, it would be a full mastectomy and they would take all my lymph nodes, or we could start on chemo right away,” she says.

Starting at the end of April 2019, Stewart and her husband drove to Denver every week for 12 rounds of chemotherapy, staying each time with her aunt and uncle who live near the CU Anschutz Medical Campus. They alternated bringing the children with them “because it was good for them to see what’s going on so it’s not mysterious and not so scary,” Stewart says. “But we wanted to keep their lives as normal as possible, so some weekends two would go to my dad’s or two would go to Doug’s parents, and to give my husband a break a couple of times my dad took me to chemo.”

Stewart responded well to the chemotherapy, Tevis says, and she and Stewart then discussed the pros and cons of lumpectomy vs. mastectomy. Stewart decided to have a lumpectomy at the end of September 2019.

“All the invasive cancer had been killed by the chemo, but she had a lot of residual DCIS, which is residual cancer in the duct of the breast that hasn’t invaded into surrounding breast tissue,” Tevis explains. “That’s one of the complicated conversations that we have, because we can do an exam, we can look at your imaging, but you can’t know what’s going to be there microscopically when we do surgery. In Kirsten’s surgery, we kept finding more DCIS.

“So, when I say it’s a complicated conversation, I feel like we had many complex decisions to make with Kirsten, and she was such a trooper. She really thought things through and took the evidence we presented to make the best decision for her,” Tevis says.

Learning that the lumpectomy hadn’t cleared her margins was disappointing, Stewart says, but she was just 31 at that point and couldn’t take any risks with her health. She decided to have a bilateral mastectomy on New Year’s Eve 2019 – a necessary but no less easy decision.

“The surgery itself went smoothly, but that first time seeing my chest after my mastectomy was horrible. I was pretty doped up, I was still kind of bald, I have these major scars on my chest, I’d gained weight from all the steroids – and it was harder to lose than pregnancy weight -- I didn’t have any eyelashes, I felt like crap. I had expanders in, so I wasn’t complete flat, but I just remember standing there and bawling my eyes out. It just strips you completely down to who you really are,” she says.

Stewart began a course of radiation in February 2020, finishing just in time as everything began shutting down due to the COVID-19 pandemic. Following conversations with Christodoulos Kaoutzanis, MD, an assistant professor of plastic and reconstructive surgery, Stewart decided to have breast reconstruction using abdominal-based autologous tissue also known as DIEP free flaps – in which skin and fat from the lower abdomen along with a blood vessel are used to reconstruct the breasts -- rather than implants.

“In her case, the decision was made based on her desire to have her own tissue as opposed to having implants that are foreign bodies,” Kaoutzanis explains. “It’s a longer and tougher operation, but it can be a better operation for younger women because they don’t have to worry about implants and their potential long-term complications.”

Stewart’s original surgery was scheduled for November 2020, but a COVID-19 surge saw it moved to February 2021. The surgery went smoothly, Kaoutzanis says, and she recovered well.

“Even though it was a couple of weeks of serious pain, it absolutely was the right choice for me,” Stewart says, adding that she was able to work from home during that time and didn’t use all of her paid time off during her recovery. Because of that, she and her husband are going to take the children to Universal Studios in Orlando, Florida, in early December before she has revision surgery.

“The thing that’s so important to talk about is, I never thought or realized that younger women could get breast cancer. It wasn’t until I was diagnosed that I began to realize there are a huge number of women under 40 who get diagnosed,” she continues. “We’ve got to keep talking about how important it is for young women to get screened, to know if they have risk factors, to get genetic testing, to really know their bodies. If I hadn’t known my body and known that something was wrong, things could have turned out a lot different.”