Comedian Louie Anderson — known for his stand-up routines, as well as a hosting stint on “Family Feud,” his animated series “Life With Louie,” and a more recent role on the FX comedy series “Baskets” — died January 21of diffuse large B-cell lymphoma. He was 68.

Anderson’s death underscores how deadly diffuse large B-cell lymphoma — a cancer of the lymphatic system — can be. We talked with University of Colorado (CU) Cancer Center member Manali Kamdar, MD, about the disease, its symptoms, and its treatment. Over the past four years, Kamdar has been the lead investigator on a global, multicenter, phase III clinical study to find out if a medication called Breyanzi (lisocabtagene maraleucel; liso-cel) can improve outcomes for patients who don’t respond to the standard-of-care treatment for diffuse large B-cell lymphoma. The chimeric antigen receptor (CAR) T-cell therapy works by removing blood from a patient’s body, enhancing immune cells called T cells to better fight the lymphoma, then re-infusing the cells back into the patient.

What is diffuse large B-cell lymphoma?

How does it first show up?

Patients usually present with a painless, palpable lump. They might have a swelling in the neck or swelling in the armpit or the groin. The patient is typically seen first by a primary care physician, and to make sure that the lump is not because of an infection, they get a course of antibiotics. Patients with diffuse large B-cell lymphoma typically do not respond to antibiotics, and that’s how further evaluation ends up happening. Usually the evaluation consists of a biopsy, and that’s really important. Getting a good biopsy is the crux of all therapies and the crux to success for all therapies. Besides the palpable lump, some patients can experience symptoms such as drenching night sweats, unintentional weight loss, loss of appetite, and fever that is not attributable to infection. Sometimes patients can have really large masses, which are basically lymph nodes that have coalesced to become a large mass, and when the mass is biopsied, it proves to be a lymphoma.

Is there a standard screening for diffuse large B-cell lymphoma?

We don’t typically screen for it. Patients have to be fairly proactive to say that they have a new lump. Not every patient will have other symptoms, but usually diffuse large cell lymphoma is an aggressive cancer. Usually patients say, “For the past six months or so, I've been waking up with drenching night sweats, then I noticed a lump.” That's how they come to medical evaluation. Patients typically end up getting this diagnosis within a month to three months of finding something abnormal.

Are there any risk factors?

Currently, we don't really know of any one risk factor that may be responsible for diffuse large B-cell lymphoma. There has been a lot of research into identifying etiologies of why someone gets lymphoma, but right now, we are not really saying, “This is why you get a lymphoma.”

What is the treatment for diffuse large B-cell lymphoma?

The current standard of care is called R-CHOP — an immunochemotherapy regimen consisting of rituximab, cyclophosphamide, hydroxydaunorubicin hydrochloride (doxorubicin hydrochloride), vincristine (Oncovin) and prednisone. R-CHOP cures around 60% of patients, which is good, but 40% of patients either initially respond, then relapse later, or they do not respond at all to R-CHOP. The standard of care for patients who fail R-CHOP is autologous stem cell transplantation — essentially a bone marrow transplant using the patient’s own stem cells — but not all patients can go through an autologous stem cell transplant because of age, performance status, and other medical comorbid conditions.

There has been a ton of research in patients who are transplant eligible, as well as those who are transplant ineligible. In the transplant eligible population, there have been three recent clinical trials — including one at the CU Cancer Center — comparing auto-transplant to CAR T-cell therapy in this setting, and two of those have shown that CAR T-cell therapy is a clear winner. We are hoping that the regulatory bodies will soon review the data, and if it gets approved, then we will end up hopefully changing standard of care for patients with relapse in the second-line setting.

Is there anything else you want people to know about diffuse large B-cell lymphoma?

Just that even though it presents very aggressively, there is a pathway forward. We have done a lot of research, and some of it is happening at the University of Colorado. We have therapies; we can take care of patients. Even though somebody has been diagnosed with this, I think it’s important to understand that there are therapies available. Getting to the right place at the right time is important. 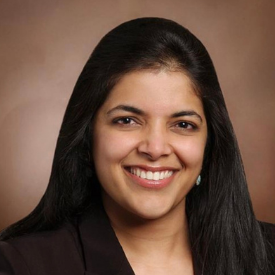