“The basic message we’re trying to convey is that turning those M2 macrophages into a more M1 phenotype has beneficial effects in promoting anti-tumor immunity,” says Laurel Lenz, PhD, investigator at the University of Colorado Cancer Center, professor in the Department of Microbiology and Immunology at the CU School of Medicine, and one of the paper’s authors.

Previous work has shown that people with a naturally high ratio of M1 to M2 macrophages are less prone to develop cancer. And in mouse models of the disease, encouraging a high M1-to-M2 ratio can “slow or stop cancer growth,” the paper writes.

The paper describes a way to accomplish the second: In the presence of the cytokine interferon gamma, macrophages take on the M1 phenotype.

“Interferon gamma has been explored as a possible therapeutic agent, but there are problems with it,” Lenz says. “Interferon gamma mediates hundreds of effects and some of them aren’t very comfortable.”

Instead, one idea is to improve the sensitivity of cells to the interferon gamma that already exists in the body.

“In the right context, macrophages lose their sensitivity to interferon gamma and we want to prevent that,” Lenz says.

Another approach seeks to augment interferon gamma only in tumor tissue, keeping its effects localized.

“The immune system’s killer cells produce interferon gamma and one promising strategy is to get them to the tumor and activated in the right way,” Lenz says.

In fact, existing immunotherapies seek to recruit the body’s killer cells, especially cytotoxic T cells, to recognize and attack tumor tissue. A byproduct of this activation is the production of interferon gamma at the tumor site, which causes macrophages to take the M1 and not M2 phenotype.

“Cytotoxic T cells can directly kill tumor cells. But they also produce interferon gamma. Both are likely contributing to the anti-tumor effect,” Lenz says. “By devising approaches to tune macrophages in the right way, we hope to further improve immunotherapies.” 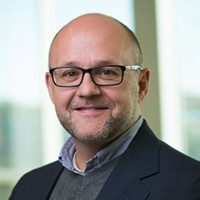