Corralling four research programs, 12 shared resources, a 28-member leadership team, and a $23 million grant is a huge job — but it’s one that Michaela Montour has performed at the University of Colorado Center with ease for more than 20 years.

For the dedication she has shown to her role as assistant director for research administration at the CU Cancer Center, Montour was recently recognized as Research Administrator of the Year at the CU Anschutz Research Awards.

Montour’s nomination letter, written by CU Cancer Center leadership, notes that Montour is “not only is a great administrator, but she is an incredible colleague,” and that “her presence is simultaneously calming and energizing. She radiates efficiency, confidence, and collegiality.”

“Michaela has a positive and constructive assertiveness and approaches her job with an attitude that’s full of life,” the letter continues. Montour, the leaders write, “demonstrates to everyone that nothing is impossible if you have determination, skills and work as a team.”

The ever-humble Montour is quick to credit her entire team with the success for which she was recognized.

“To me, administrative roles are never solo roles,” Montour says. “There’s nothing that I do that I’m doing on my own. I work with a great team of people, and I have wonderful colleagues across campus that make it possible for me to get done what I need to get done. The leadership team in the cancer center is amazing to work with as well — it's a huge team effort.”

Keeping an eye on the NCI

Montour’s primary responsibility at the CU Cancer Center is overseeing the center’s $22.8 million grant from the National Cancer Institute (NCI) — a grant that was renewed in March and helps fund everything from basic, translational, clinical, and population science research to community outreach and engagement efforts. Montour’s role involves keeping tabs on the metrics that demonstrate the progress of the center and the activities that are undertaken to fulfill the mission of the grant. She also oversees a team of grant specialists who coordinate other research grants at the cancer center.

Montour was “anti-science” in high school and college, she says with a laugh, but serving as an administrator for so much important medical research has opened her eyes to its importance and lasting impact.

“I find it really amazing,” she says. “When you look at someone like Manali Kamdar and the breakthrough therapies that she has helped to develop for the treatment of lymphoma — it’s absolutely astounding what we can do, and it's also somewhat heartbreaking. You think about friends and family you've lost to cancer over the years, and you think, ‘I just wish we had been that much further along then, that we could have done something for them.’” 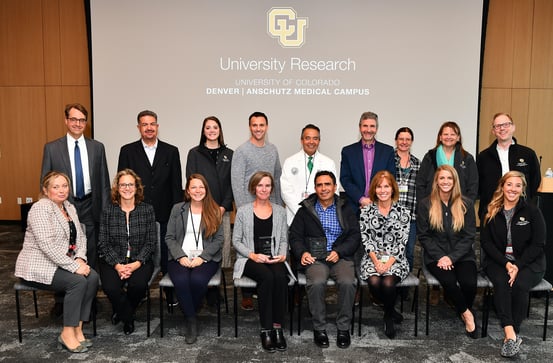 It's a feeling that hits especially hard for Montour this year. She has lost other family members to BRCA2-driven cancers in the past, but earlier this year she lost her brother Kevin Archambault, 45, to colon cancer. As someone with such a close connection to the disease, she is especially inspired to see CU Cancer Center research aimed at treating and preventing all types of cancer.

“I myself am positive for pathogenic mutation in the BRCA2 gene,” Montour says. “Knowing what I know, and having had the exposure that I’ve had over all of these years here in the cancer center, I feel like I’m better equipped to make well-informed decisions and to talk with my doctor about what sort of preventative measures I can take to hopefully avoid developing a BRCA2-driven cancer myself.”

Montour’s career at the CU Cancer Center began two decades ago, back when what was then called the University of Colorado Health Sciences Center (now the CU School of Medicine) was located on Ninth Avenue and Colorado Boulevard in Denver. Then a graduate student working in the Office of Grants and Contracts, Montour was recruited to work at the CU Cancer Center.

Over the following years she saw the construction of the CU Anschutz Medical Campus, as well as the expansion of the cancer center.

“We've grown tremendously over 20 years, in all areas,” she says. “When I started, we had a core of just over 100 faculty members who were really hardcore cancer researchers. There has been a tremendous amount of change and growth in terms of NCI expectations and guidelines, and our research portfolio has grown tremendously right alongside the university’s. It’s been absolutely amazing.”

Despite all she does and all she oversees, Montour says her favorite part of her job is simple — being able to help people.

“When somebody reaches out and says, ‘I don’t really know where to go with this; what do we do?’ to be able to work with them and come up with a resolution and help direct them down the right path — that's the most rewarding part of the job.”

Three other CU Cancer Center members were recognized at the 2022 University Research Awards: