A new movie streaming on Disney+ is shining a spotlight on a rare type of bone cancer that occurs most often in children and young adults.

The movie, “Clouds,” is based on the true story of Zach Sobiech, a young musician who died in 2013 from complications from osteosarcoma. Prior to his death, his song “Clouds,” about his battle with cancer, went viral on YouTube, where it currently has more than 15 million views. The movie “Clouds” stars Fin Argus as Zach, Neve Campbell as Zach’s mom, Laura, and Madison Iseman as Zach’s girlfriend, Amy.

As a doctor, Breelyn Wilky, MD, a researcher at the University of Colorado Cancer Center, is all too familiar with osteosarcoma, which she calls a “bad luck cancer” because it has no apparent cause. This specific type of sarcoma occurs more often in kids and young adults, she says, because their bones are still growing. 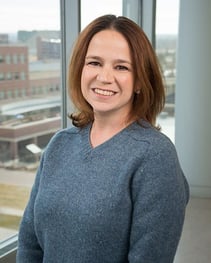 “Sarcomas are cancers of structural tissues like bone or muscle or tendons, and those shouldn’t be dividing in adults very often,” she says. “They could divide to repair or something like that, but once you finish growing, a lot of those cells are at rest. But kids are obviously still growing, and so we think in the growth plates, in the bones, that as those bone cells are dividing and continuing to grow, it sets the stage for something to go wrong for genetic mutations that lead to the disease.”

Wilky says the most common warning sign of osteosarcoma is bone pain in the arm or leg. If the cancer is caught early and it stays localized to the bone, the cure rate is around 70%. Patients receive intense chemotherapy treatments before and after surgery to remove the cancer.

In Sobiech’s case, the cancer spread to his pelvis and lungs, which made it much harder to treat. Wilky says when cancer metastasizes (or spreads) in that way, the cure rate drops to 20% or 30%. That’s why early detection is so important.

“Adults get aches and pains from arthritis or just wear and tear, but kids should not have pain like that,” she says. “That’s what we try to teach people — pain in a limb in a kid is never normal and should always be investigated intensively.”

Even when the cancer is detected early and chemotherapy is successful, the treatment can result in side effects ranging from the physical to the psychological.

“There’s a risk of damage to organs, the heart, the kidneys — some kids can get permanent nerve damage,” Wilky says.

Fertility can also be affected by the chemo, she says. “For boys, we will routinely do sperm banking before we start treatment if we can because the chance of them becoming sterile as a result of the chemotherapy is very high. And for girls, it’s a bit more complicated because egg harvesting often requires collection at a certain point in the menstrual cycle – which can delay starting treatment. ”

→ Start the Conversation About Fertility Preservation Before Beginning Cancer Treatment

For adolescents and young adults who already are dealing with issues such as school, applying to college or getting their first jobs, the therapy also can result in depression and lower self-esteem.

“Sometimes that transition back to normal life, having gone through cancer treatment as an adolescent or young adult, is really hard,” Wilky says. “There’s a lot of depression and long-term anxiety we continue to manage for years after these folks go through treatment. It’s basically a trauma.”

Wilky says the release of “Clouds” on Disney+ is a good thing: It’s likely to raise awareness of the disease, resulting in an increase in early detection as well an increase in fundraising for research on osteosarcoma. The Zach Sobiech Osteosarcoma Fund, started in 2012, has raised more than $2 million and funded eight seed grants and a national clinical trial.

“The reason why we depend so much on personal foundations like this is because with rare diseases, the funding from the National Cancer Institute, and the interest from pharmaceutical companies is low,” Wilky says. “So we really depend on these groups for initial funds to get research into new therapies off the ground and running.”

At the University of Colorado School of Medicine, a specific donation fund for sarcoma research helps Wilky and other researchers.

“Part of the reason why it’s so underfunded is there just isn’t awareness,” Wilky continues. “If you don’t know someone who has a sarcoma, it’s really unlikely people will ever even have heard of it. So a movie like this is huge. It’s going to get that message out, at least for what a sarcoma is. There are 150 different types, but nobody’s going to care about that. If they recognize, ‘Oh, a sarcoma is the cancer that Zach had in “Clouds”’ — we need all those sorts of things that we can get.”