When Russia’s invasion of Ukraine in February 2022 turned into a prolonged war between the two nations, Young was one of hundreds of medical professionals around the world looking for a way to help Ukrainian citizens displaced by the conflict.

“I feel like I'm a pretty well-trained and capable emergency medicine provider, and I've been entrusted with a lot of the skills that I've been taught,” says Young, an assistant professor of emergency medicine at the University of Colorado School of Medicine. “This felt like a way to pay it forward for people who had believed in me and pushed me along this path. It felt right to use the skills that I've been given to be able to help.”

Boots on the ground

Young reached out to Team Rubicon, an American organization that arranges disaster-relief efforts in the U.S. and abroad, and in April he flew to Krakow, Poland, as part of a medical team that included one other doctor, three nurses, and four paramedics. Days later the group crossed the border into Ukraine, where they immediately began providing medical care for Ukrainian citizens living in shelters after leaving their home cities.

“We had backpacks and bins full of medicine and medical equipment, and we were delivering care on the spot,” Young says. “Anybody who was more complicated, we would work with local hospitals and other resources to coordinate or care for them.” 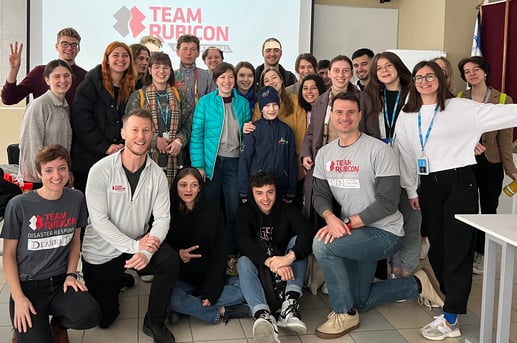 Young with his Team Rubicon colleagues.

Among the issues the team treated were viral illnesses, sprains and bruises, and medical conditions such as chronic obstructive pulmonary disease and hypertension.

“We saw some people with very recent surgical procedures who had no follow-up because the surgeries were not related to trauma; they were related to underlying medical conditions,” Young says. “They needed drains taken out of them or they had sutures in their abdomen, but they were unfortunately 1,000 miles away from their hometown or their medical providers, and didn't know how to access medical care.”

As they treated patients in the area in and around the city of Lviv — often traveling to nearby towns during the day — Young and the rest of the Rubicon team encountered many Ukrainians who were grateful for their help. To his surprise, he also talked to many who were concerned about his safety.

“A question that I got all the time from patients was, ‘Why are you here? Don’t you know that it's not safe?’ That speaks a lot to the character of people of Ukraine,” he says. “They were very surprised that the medical team that I served on would come so far to help, despite the risk.”

Another surprise for Young was that he ended up spending almost as much of his time in Ukraine teaching as he did practicing medicine. His experience in emergency medicine was of high interest to local medical universities, hospitals, and paramedic training schools, and many of the students he trained were preparing to take his lessons straight to the battlefield. In addition to trauma and resuscitation care, he found himself addressing chemical warfare and blast injuries as well. 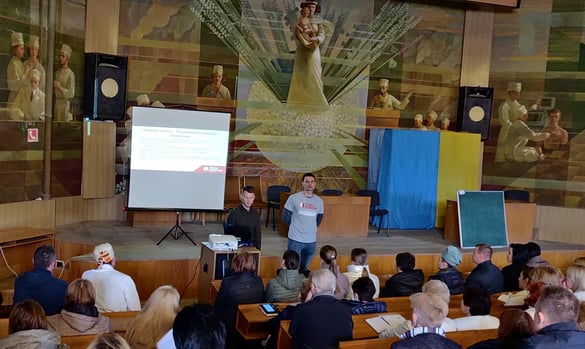 “I'm an educator at the University of Colorado School of Medicine, so I feel comfortable talking and presenting, but these were not topics I would say that I'm expert in,” Young says. “I did a lot of work, while I was there — tons of reading, lots of research — but it was a little nerve-racking to talk about a subject matter I don't feel terribly expert in, and also to speak about it in Ukrainian. I had an interpreter with me, and I would say a few lines, and then he would interpret what I was saying.”

Young spent three weeks in Ukraine, and he says that when he returned to Colorado, he had a new perspective on his role.

“A lot of times when you work in the same place, and you have your nose to the ground as you work shift after shift after shift, you can lose a little compassion,” he says. “This experience really reminded me what I love about medicine and what a gift it is to be able to treat people and help them through a medical issue. You could really see the gratitude of some of the Ukrainians that we treated, and I came back feeling reenergized and grateful for the skills I have.”