Five years ago, the Section of Wilderness and Environmental Medicine (WEM) at the University of Colorado School of Medicine journeyed to Greenland to provide health care services for researchers at the U.S. National Science Foundation’s (NSF) Summit Station. 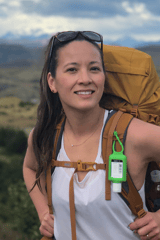 What began as a one-year contract has turned into five years full of learning experiences for Jay Lemery, MD, professor of emergency medicine and section chief of WEM, and the wilderness medicine fellows who have deployed to Summit Station for a once-in-a-lifetime training opportunity.

Since 2016, WEM has deployed three wilderness medicine fellows and paramedics who have split time at the camp during high season between April and August. WEM also provides telemedicine during winter months from the Anschutz Medical Campus. This year, WEM is planning to deploy two wilderness medicine fellows and a paramedic to make up for lost research time due to the COVID-19 pandemic.

“We have a decent clinic at Summit Station, but many of the researchers are out deep in the field with a rudimentary medical kit and no medical training, so it’s our job to help mitigate risk as best we can,” says Lemery. “We’ve improved our emergency capability, been able to send our wilderness medicine fellows to the ice, and have added on-call psychiatric first aid, as well as pre-deployment first aid training programs to researchers.” 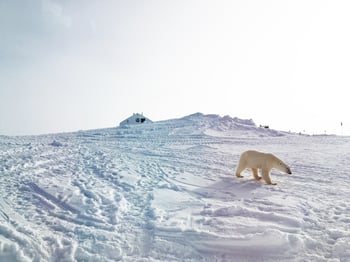 Before supporting Summit Station, WEM, a section of the CU Department of Emergency Medicine, had provided remote medical services for the U.S. Antarctic Program. That experience helped to hone WEM’s skills for the new challenges they would face in Greenland.

In 2018, the WEM team had an encounter with a polar bear that wandered into camp, hundreds of miles away from home. This incident posed an unpredictable situation that brought to the forefront the need for mental health support as part of the team’s medical care.

“A healthy polar bear walked into the camp — hundreds of miles from the sea from its normal habitat,” says Lemery. “Unfortunately, it had smelled the kitchen and was not going to leave.”

Because the polar bear was so far away from the sea, and with no provision like a nearby protected area or national park to move it to, the Greenlandic authorities had to euthanize the polar bear. NSF researchers and staff on the ice, many dedicated to the preservation of biodiversity and protection of the environment, were devastated by the incident and emotionally traumatized.

“We quickly identified these stressors and had a team of CU-based psychiatric first aid providers ready to provide support for many weeks after,” says Lemery. “We felt it was critical to scale up our capacity here and get mental health care providers who understood psychiatric first aid. Luckily, we had people that were really good at it and many of them were CU School of Medicine faculty.” 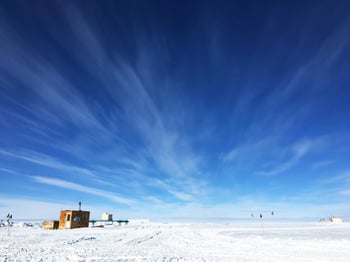 Similar to the rest of the world, the Summit Station could not avoid the impact of the COVID-19 pandemic. The research season was canceled in 2020 even though there hasn’t been a case of the virus at the camp. Researchers and staff are put through rigorous protocols that include numerous tests and extended quarantines before and after arrival.

The WEM team is heavily involved in procuring appropriate personal protective equipment, and working with both U.S. and Greenlandic authorities to comply with quarantine and testing guidelines from multiple jurisdictions.

“Knowing that there will be the potential for cases, we are always working to figure out how we safely get people to and from the camp,” says Lemery. “We are dealing with different circumstances — exposure from civilian and military flights, where exposure to COVID is higher. We’re looking to safely have hundreds of researchers and staff head to the ice this spring and summer.”

Though the team has always provided telemedicine during the winter months via telephone calls and emails, they have added Zoom as a method to connect with researchers and staff. They have always had the bandwidth to provide virtual telemedicine, however, it’s because of the new Zoom culture that has grown over past year that has made the concept less foreign and easier to provide care.

The WEM team is planning for an extended season this year because last year’s research was cut short. This means WEM will deploy for the first time two wilderness medicine fellows and a paramedic at various times during the spring and summer season to provide care for researchers and staff. One of the WEM fellows headed to Summit Station this April will be Mia Derstine, MD. She will spend six weeks at the camp and is thrilled for the opportunity to practice in such challenging conditions.

“I hope to learn how to address medicine in a truly remote environment with limited diagnostic tools and backup,” says Derstine. “I am brushing up on reading about austere medicine, reading literature about using portable ultrasound in such conditions, and starting to train for the altitude.” 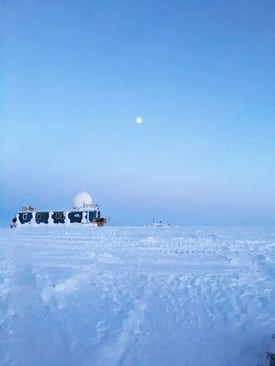 At the height of the pandemic, another critical change occurred. The NSF switched contractors from CH2M Hill to Battelle to provide infrastructure and logistics support for researchers at Summit Station. WEM was a subcontractor for CH2M Hill providing health care services, a contract that was retained by Battelle.

With this new partnership, Lemery — who is also the co-director of the Climate & Health Program —sees an increased drive to invest more educational and training resources with the Greenlandic communities. Lemery sees this as not only an opportunity to expand the work of WEM, but also to create new learning experiences for medical students interested in climate and health.

“We’re hoping to have more community engagement with the Greenlandic communities through our wilderness medicine and climate and health education, as well as online offerings,” says Lemery. “There’s a real educational synergy there. And being able to have our medical students go up there and participate would be phenomenal. You would have the health angle with wilderness medicine and the chance to meet climate scientists conducting research. This could be a fabulous opportunity.”

“As the Arctic conditions evolve due to climate change, we may see more sustained human activity there, and we have an expertise in keeping people safe in these very extreme environments,” says Lemery.

“We think we’ll have more ability to send our faculty to the Summit Station clinic for six months per year, and possibly to other NSF sites as well.”