Alzheimer's disease is the sixth leading cause of death in the United States, impacting millions of Americans and their families.

Here at the CU Anschutz Medical Campus, The Rocky Mountain Alzheimer's Disease Center is focused on ending Alzheimer’s disease and other causes of dementia.

The Center's Director, Dr. Huntington Potter, PhD, has answers to some common questions they receive on Alzheimer's disease. 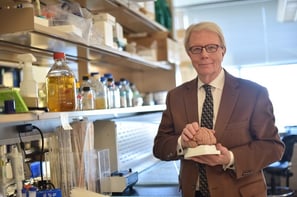 Alzheimer’s is a complex disease caused by the accumulation of harmful proteins both inside and outside brain cells. These clumps, called plaques and tangles, kill healthy neurons and eventually lead to memory loss and other cognitive problems. What causes the beginnings of Alzheimer’s disease remains a mystery.

What are the first warning signs and early symptoms?

We want to stress, Alzheimer’s disease is not normal aging, but the very earliest symptoms are often misread as simply getting older: having less energy and drive, some forgetfulness or confusion, and mood changes. The name for the condition that precedes Alzheimer’s disease is called Mild Cognitive Impairment. Many people ignore the early signs when they should be seeing their doctors, asking for an evaluation.

How is someone diagnosed?

Historically, a diagnosis of Alzheimer’s was 100% accurate only after death and a brain autopsy. But more recently, physicians are able to make probable diagnoses while people are living, using brain imaging technology, multiple questions and answers, and an analysis of blood proteins.

Yes and no. Heredity often plays a role but it is not a guarantee. Many people with a family history of Alzheimer’s do not get the disease, and likewise, many with no family history can still develop Alzheimer’s. Alzheimer’s disease is the most common form of dementia, and the greatest risk for everyone is simply living longer.

What about prevention? Are there ways to keep the brain healthy as we age?

A healthy brain is often part of good overall physical health. Although there is no cure, there is research that says health-conscious living can delay the onset of dementing diseases, including Alzheimer’s. We sometimes say, “what’s good for the heart is good for the brain,” meaning a heart-healthy lifestyle is also a brain-healthy lifestyle. Getting lots of exercise, the right amount of sleep, a good diet, and staying engaged with people and creativity all make life more enjoyable with healthy brain benefits.

How can someone best help a loved one diagnosed with Alzheimer’s?

Continue to love and support the person and be mindful that the disease is no one’s fault. Beyond having a supportive attitude, families and individuals should get their affairs in order while they have the presence of mind to do so. Determine how care in both the short and long term can be provided. Don’t expect one person to have the capacity, know-how or interest to provide all the care. Build a network of care partners and get trained on how to properly manage the changes that are coming.

What are researchers at the Rocky Mountain Alzheimer’s Disease Center focused on? Are there any promising studies?

We have a large, dedicated team of scientists and clinicians at the University of Colorado Anschutz Medical Campus working together, studying how the disease develops and how it can be better diagnosed. We’re also developing new treatments in the laboratory that will be next tested in mice and, if successful, ultimately in humans.