Home News Book explains how to treat vertigo back to News

When Carol Foster, MD, first publicized her home-remedy vertigo maneuver in 2013 — an online story and YouTube video both posted — the response was nothing short of phenomenal. The video has received over 3 million views and the CU Anschutz Today story has been clicked 256,000 times. 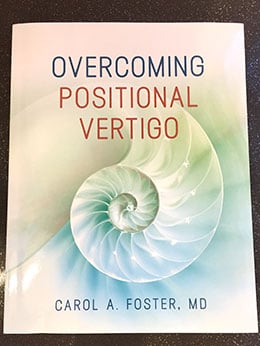 "Overcoming Positional Vertigo" is a comprehensive guide to the Foster maneuver and details simple preventative measures readers can take to avoid recurrence.

Now Foster, an assistant professor of Otolaryngology at the University of Colorado School of Medicine, has written a book, “Overcoming Positional Vertigo.” It provides a comprehensive guide to the Foster maneuver and details simple preventative measures readers can take to avoid recurrence.

Because 10 percent of people over age 60 suffer from benign paroxysmal positional vertigo (BPPV), Foster is likely to field another wave of worldwide interest when her book is published in early January. “I get constant feedback from people all over the world — every day — and they have the same questions. They want more clarity than what’s on the video, such as: Can I repeat the maneuver? How many times should I do it? When should I see a doctor?”

She decided the best way to address these questions was to write an in-depth book about BPPV. Most literature about BPPV, she said, falls into the category of overviews that only glance upon the subject — and in highly technical language.

“I took my knowledge and translated it into a normal vocabulary for the layperson,” Foster said. “The idea was to allow the average person to learn all about the disease so they’d know about BPPV to the extent a doctor does. And so, they could do treatments on their own at home,” thereby also potentially saving them thousands of dollars in clinical care costs.

Foster’s own experience with vertigo — she suffers from Meniere’s Disease, an inner-ear disorder that causes hours-long bouts of dizziness — precipitated her groundbreaking discovery one day in her bedroom. She considered that BPPV could be what was afflicting her “good ear,” the one not affected by Meniere’s, as she woke up one morning. Unlike Meniere’s, where the cause is often unknown, BPPV is caused by gravity-sensing particles in the ear accidentally entering the spinning-motion sensors of the ear.

As she experimented with the Epley maneuver on herself that morning — a series of body and head maneuvers used to treat BPPV — she discovered the moves were intensifying her vertigo. She began to conceive a half-somersault-type maneuver that might return the particles to where they belonged: The Foster maneuver was born.

“To me, it’s trivial, and I think it should be that way for everyone,” she said. “Instead of being frightened, you should just know: ‘Oh, there’s that again. I’ll do the maneuver and be free.”

The do-it-yourself remedy has worked for people around the world who struggle with bouts of dizziness. One patient said, “Your exercises are wonderful — they changed my life.” Another commented, “I tried your maneuver when the spinning started … it worked! I did it three times and this morning it was GONE!”

The reason BPPV rates increase as people age has to do with those particles: the more your sensor ages, the more pieces break off. “When you lay down, there’s an opening above the gravity sensor. The pieces can fall in,” Foster said. “Imagine having pieces of buckshot in your ear and if you put your head down below the horizontal, they can fall in.”

More than 8 million people in the United States can expect to have BPPV. “It’s huge and worldwide,” she said, “and there are people who have it and don’t go to a doctor, so they aren’t reported.” 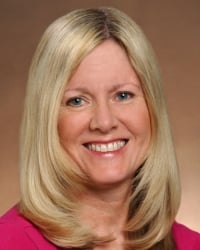 Carol Foster, MD, assistant professor of Otolaryngology at the CU School of Medicine

Foster included a chapter in the book about ways to prevent BPPV from recurring. Sufferers need to be aware of their limitations, she said, such as avoiding certain positions that prompt bouts of BPPV.

The book emphasizes how sufferers can essentially become their own physician. “Fundamentally, what you have here is a mechanical disorder,” Foster said. “It’s like having a splinter. Everyone knows how to get one out, but what if you had to spend $1,000 to remove it? Does it have to be a medical procedure that costs that much? Or can you do it at home? This is mechanical enough that it should be like removing a splinter. And if it doesn’t work, then you should go to the doctor.”

When she does the Foster maneuver, it never takes more than a couple minutes before she gets rid of the vertigo.

“I just wanted to get it out there and become kind of known about,” she said of the maneuver. “I didn’t expect it to become famous. It’s crazy, but it’s also great. The more people who can use it, the better.”