Nicholas Jacobson, an architect by training, has a passion for combining structure with aesthetics. It wasn’t until he joined the Inworks team at the University of Colorado Anschutz Medical Campus that he put another skillset – a knack for collaboration – into overdrive.

Fueled by a fascination about how things work, and the inherent beauty within the most complex of structures, Jacobson developed breakthrough software that prints 3D replicas of human anatomy. The power of Jacobson’s technology ­– the first patent to come out of the CU Anschutz Inworks lab – is its high resolution, speed and range of anatomical components that can be printed.

Imagine some of the most delicate features in our bodies – capillaries, neurons, valves – printed with remarkable 3D precision. “There isn’t an area we have found where we can’t make a breakthrough,” Jacobson said.

Jacobson’s title is clinical design researcher, but he could also be called “collaborator-in-chief.” In perhaps an unprecedented collaboration at CU Anschutz, Jacobson in the past three years consulted with over 30 surgeons and physicians from over a dozen disciplines, as he developed the beta software.

Jacobson is the founder and inventor of Inworks’ first spin-off company, aptly named MIX Surgical Technology. It’s a fertile field, given that the Affordable Care Act makes 3D printing for certain medical purposes eligible for coverage through Medicare, Medicaid and most healthcare plans. 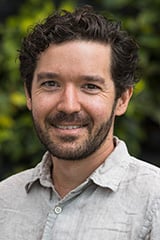 “We’re expecting massive growth and disruptions in this market, which is why we’re spinning out now,” he said.

It’s new terrain to map every pixel in a medical image to a droplet coming out of the printer. The droplets are about 15 microns in size; by comparison, the cross-section of a human hair is 50 microns.

“The real breakthrough is we can print in color, but also in different densities of materials to better replicate the gradients in soft tissue,” said Jacobson, who received his Master’s in Design Technology and Computational Design from Harvard University. “It allows us to replicate soft tissue and get very fine features like the neurons in the brain, or the branches of the lungs, or small differences in bone density. There’s no limitation to the complexity that we can print.”

Surgeons say this high-fidelity replication of medical imaging offers a leap forward in pre-surgical planning. It’s now possible to precisely map the location of a tumor inside a kidney, or know exactly where calcium deposits lie in a pulmonary artery, or pinpoint language-function areas in the brain so as to avoid them during surgery.

Diagnostic models are only the beginning. The software captures billions of data points from images, allowing direct 3D printing from MRIs, CT scans and other medical images. “We can start to overlay other forms of data and add stress and strain and dynamics to it,” Jacobson said. 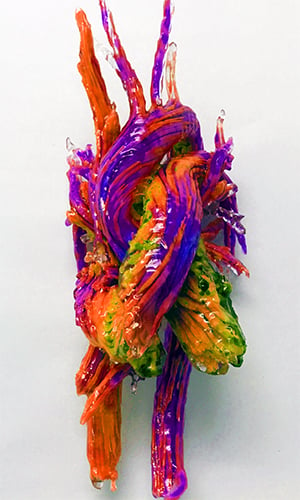 This is an image of 4D flow, hemodynamics, showing

the direction and velocity of blood flow in the

human heart. The lines are tracing the direction

and the color is referring to the velocity. The bluer

the higher the velocity, and the greener the slower.

He has worked with pediatric cardiologists, for instance, on creating patient-specific implantable heart valves and stents.

“We can model dynamic data, such as hemodynamics (dynamics of blood flow), tractography (visually represent nerve tracts in the brain and nervous system), and can include structural analysis of things like parametric design.”

The latter would allow the building of patient-specific prosthetics and implants.

Jacobson said his company and its intellectual property, which is licensed through the University of Colorado, wouldn’t be possible without campus leadership’s focus on innovation.

“I wouldn’t be where I am without being able to walk into Jenny Zablah’s office (Dr. Zablah is an assistant professor of pediatrics-cardiology at the CU School of Medicine and a congenital interventional cardiologist at Children’s Hospital Colorado), or pick up the phone and have this back and forth (dialogue with physicians),” he said. “We’re being encouraged from the top down to empower ourselves with innovation. It’s really exciting.”

Kristin Wood, PhD, director of Inworks, which is located in the Strauss Health Sciences Library (another lab is at CU Denver), said the CU Anschutz lab’s core strategy is to link engineering-trained designers with surgeons, physicians and other medical experts. The goal is to create cutting-edge technologies, such as Jacobson’s software, that will improve and save lives and reduce healthcare costs through better surgical procedures, planning and training.

Wood, who is also senior associate dean in the CU Denver College of Engineering, Design and Computing, said Inworks serves as a kind of “sandbox” where professionals of varying disciplines come together and pursue, free of barriers, groundbreaking solutions. “They’re doing great things in a very agile way, and the opportunities are endless.”

Making discoveries, all together

While his end products are leading-edge in both design and application, Jacobson gets almost equal satisfaction from being able to stroll across campus and meet with some of the world’s best minds in medicine and science. He looks back on his three years at CU Anschutz and thinks of the many insightful, open-door conversations that led to MIX Surgical Technology.

“When we all come together – an architect, a radiologist and a surgeon – that’s what’s really groundbreaking about what we’re doing on the Anschutz Medical Campus,” Jacobson said. “It’s unique, and it’s leading to discoveries.”

What physicians are saying about the software

Jenny Zablah, MD, is an assistant professor of pediatrics-cardiology at the CU School of Medicine and works in the Cardiac Catheterization Lab at Children’s Hospital Colorado. She said the printing technology provides replications of tissue layers of different strengths – extremely important in matters of the heart. The 3D models give her “a better sense of how the anatomy looks and if certain valves are going to fit,” she said. “I’m a big planner, so all this helps me to anticipate the approach for these patients.”

The patient-specific, high-definition heart models are also appreciated by families, who get the tactile experience of holding a replica of their loved one’s heart while Zablah shows how the surgical procedure will unfold. “It’s not like doing a drawing on a board,” she said. “It’s more real for them.”

Zablah is working with Jacobson to go beyond diagnostic modeling to, ultimately, develop customized heart valves that could be implanted in patients.

Simon Kim, MD, is an associate professor of surgery-urology at the CU School of Medicine, specializing in urologic oncology at the UCHealth Tony Grampsas Urologic Cancer Care Clinic. He said the 3D models provide a pre-surgical roadmap to a tumor, improving efficiency in the operating room and patient outcomes.

“Margin status in cancers is critically important, and I would argue that having a 3D model of a prostate, or of a kidney with a mass, will achieve better oncologic outcomes,” Kim said. He is collaborating with Jacobson on studies that investigate if a 3D model of a kidney and a renal mass allow for surgeries with fewer complications.

Nicholas Stence, MD, is an associate professor of radiology-pediatric radiology at the CU School of Medicine, practicing at Children’s Hospital Colorado. Stence said the 3D models offer replications of the brain and masses in a much more elegant and tactile way for surgeons. It’s especially important for neurosurgeons, who, when planning to resect a tumor, must consider the anatomy and the brain function in different areas of the gray matter.

A 3D replica of a human brain.

A 3D model communicates this information much more effectively than a couple planes of images on computer screens. “Having that extra utility is pretty groundbreaking,” Stence said.

Aaron Mason, MD, associate professor of plastic surgery and pediatrics at the CU School of Medicine, is chief of the Department of Pediatric Plastic Surgery at Children’s Hospital Colorado. He specializes in cleft lip and palate and craniofacial birth anomalies. His faculty are interested in using the 3D models to develop a method to pre-surgically modify cleft lip and palate wounds before repairing them. The method would allow the team’s craniofacial orthodontist, Dr. Kristen Lowe, to modify the molds as necessary, making a series of appliances that patients can sequentially progress through – obviating the need for patients to live near the clinic for weekly check-ins.

On the education side, the department’s Dr. Brooke French is collaborating with Jacobson on a virtual-reality teaching module in which students work through a virtual-reality version of a specific procedure. Students would then perform the procedure in real time on a model that has been produced from 3D printing.