Home News Can the Gut Be Triggering Rheumatoid Arthritis? back to News

CU Anschutz researchers have identified a bacterium in humans that interacts with circulating mucosal antibodies related to rheumatoid arthritis to trigger arthritis in mice. The research could help to identify who is at risk for developing the autoimmune disease that attacks joints.

Researchers at the University of Colorado School of Medicine have pinpointed for the first time a bacterium that could trigger rheumatoid arthritis. Their look at the gut microbiome’s potential role in the autoimmune disorder could offer clues in defining what patients are most at risk for the disabling disease.

Rheumatoid arthritis is a chronic inflammatory disorder that affects close to 1% of the U.S. population, or over 1.3 million people.

Early results in the study, led by the CU Anschutz researchers and involving multiple universities, connect the bacterium to people at risk for the joint disease. “This is the first time it’s been shown – the principle that a bacterium could drive an immune response related to rheumatoid arthritis,” Kuhn said.

Below, Kuhn shares what the team has learned and how its research is helping to define who is at risk for RA.

What initially led you down this path of study?

In rheumatoid arthritis, patients develop a class of antibodies called IgA, or mucosal immunoglobulin. It’s the stuff that gets secreted in your gut; it’s in the breast milk that a mother feeds her infant; it’s in your saliva; and it’s in your lungs to a similar extent.

Because RA patients make antibodies of this class, it would suggest that there is something at a mucosal surface level that’s driving the antibodies to develop. So, we started looking at the microbiome.

Could you give an overview of your study – what was the main goal?

We’re interested in understanding how rheumatoid arthritis develops. A lot of the science is suggesting that there are interactions between our microbes and our immune system that might be the triggering point. By utilizing immune responses in people that are at risk for developing rheumatoid arthritis, we were able to pull out candidate bacteria that might drive the development of arthritis.

After we identified some of those candidate bacteria, we were able to isolate them from someone at risk for disease and put them into a sterile mouse and show that it can trigger arthritis in a germ-free mouse.

Our findings suggest that this bacteria might be important, probably not in all patients but in some patients, or that it’s one more layer of what’s needed to get rheumatoid arthritis. There are other combinations of things – genetics, environmental triggers like smoking and other factors – that are believed to contribute to developing RA.

What is the name of the bacterium you isolated?

It’s in the genus Subdoligranulum, and we call it an arthritogenic bacteria because it triggers an immune response that leads to arthritis.

Is this type of bacteria normally in humans and does it have any associations with any other diseases?

We don’t know yet. We don’t know if this bug is unique, or if it’s had adaptations that makes it unique for rheumatoid arthritis. Doing population studies is our next step. When we study a large group of participants, how common is this bacterium? Is it only found in people with particular types of disease and not healthy individuals? Those are the questions we don’t yet have answers to.

Is it possible that this bacterium could be out-competed by bacteria in, say, probiotics?

We don’t know; we haven’t done competition studies. Probiotics notoriously cannot colonize in the gut. With most probiotics, they just pass straight through your system because there’s no place for them to take hold. I tell my patients that it’s like trying to plant a palm tree in a mountain forest. If you don’t have a spot for it, it’s not going to thrive. So, probiotics really are limited to when you’ve been on antibiotics first.

Would it be possible to get rid of this bacterium without wiping out the rest of the gut flora?

Specific targeting of the bug is another area where we need to do more investigation. It is susceptible to antibiotics, but the antibiotics are going to take out a larger swath of bacteria than just this one. It’s going to take some technology development to be able to selectively get rid of it.

In your study, you implanted the bacterium in mice that are sterile – germ free. A normal gut has a complex microbiome. Is there any sense on how this bacterium would fare in a normal gut?

Good question. We run into that same problem of trying to get that bacteria to colonize where you’ve already got a full forest. As I said, we haven’t done any kind of competition experiments to see if it would take hold when we put it into a normal (non-sterile) mouse. Would it have a selective advantage allowing it to take hold – be kind of like an invasive species? Continuing with my botany analogy (laughs).

What about people with a family history of rheumatoid arthritis? Should they get checked for these antibodies, or have a stool sample to possibly detect this bacterium?

Since we can’t quite detect this specific bacterium yet – those are the studies where we’re going to look at larger groups of people – we don’t routinely tell people with a family history of RA to get tested. My colleague Kevin Deane, MD, PhD, has focused much of his research on identifying people before they have arthritis. Having certain kinds of antibodies puts you in an at-risk group. They don’t yet have rheumatoid arthritis, and we really don’t know how many of these people will go on to develop the disease – it’s not guaranteed. But the greater the number of antibodies, the more likely you are to get rheumatoid arthritis. At this point, most rheumatologists won’t treat it until you actually have joint disease.

Kevin has a prevention clinical trial that’s ongoing, and maybe we’ll know in the next couple years that a prevention strategy would work. But at this point, we don’t know if a couple years of treatment for RA would truly prevent somebody with these antibodies from developing full-blown rheumatoid arthritis.

Does a ‘leaky gut’ play any role in developing RA?

That’s a good question. I hear the term ‘leaky gut,’ and I agree I don’t quite understand what all goes into that. There is this concept that the gut barrier is not as tight as it should be and allows more bacteria to cross over, but we don’t really have ways to measure that in humans. We can do a lot of stuff in mice that we can’t in humans, and this is one of them.

There is some data coming out of studies in Europe suggesting that there is a ‘leakier gut,’ if you will, but it’s not conclusive.

So, if this was happening, bacteria could be entering the digestive system, say through the intestinal walls, from other parts of the body?

Yes, and so the idea is that not only would they enter into the intestinal tissue, past where they’re supposed to be, but even get access to the blood stream or even the joint.

What about fecal transplant procedures? Is that a treatment possibility for either at-risk or full-blown RA patients?

A clinical trial several years ago in inflammatory bowel disease – Crohn’s disease and ulcerative colitis – showed mixed results. Some people did great, but most people didn’t. When they looked back at the people who did really well, it turned out they all got a transplant from a single donor. However, it wasn’t clear what it was about the microbiome of that super donor that seemed to be so beneficial.

There definitely is a lot of interest in microbial manipulation – whether it being a fecal transplant or being something called pre-biotics – where you basically feed your gut bacteria certain nutrients to push the growth of some bacteria over the growth of others.

Are there any other gut factors that are associated with RA?

I don’t know that anybody has really looked. Classically, we think of the lung being associated with rheumatoid arthritis – not so much intestinal inflammation. A lot of our patients take anti-inflammatory medications – like ibuprofen and naproxin – and they can cause intestinal inflammation, so it’s confounded in that regard. It’s hard to know what’s happening because of the medication vs. what’s because of the disease.

Is it true that the microbiome in a mouse is practically as complex as that in a human?

There are a lot of similarities between mouse and human microbiomes. Where we go with this area of study gives us an opportunity to help refine who is at risk for RA. I think that’s going to be the biggest impact of our work. There are many things we have yet to learn. It’s very exciting. 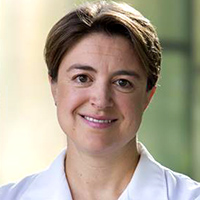