Somewhere between jungle warfare training in the Marine Corps and child abuse research at The Kempe Center on the University of Colorado Anschutz Medical Campus, Jessica Stubblefield found her calling.

The soon-to-be graduate has set her sights on helping to lead the way in ending human trafficking. While a lofty mission, from the looks of her background, Stubblefield’s career success seems likely.

Stubblefield, the second-ever Tillman Scholar in the Colorado School of Public Health, will graduate this month with a master’s degree in epidemiology.

The award recognizes outstanding leadership in 60 service members, veterans or spouses each year. Stubblefield clinched the award in 2019. 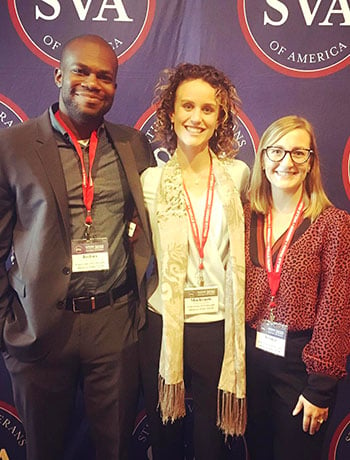 These three students were the first ever to represent CU Anschutz

at the Student Veterans of America National Conference.

Pictured at the 2020 event are, from left, Joshua Abolarin,

and Jessica Stubblefield, founder and president

of the SVA at CU Anschutz.

As an ammunition technician in the Marine Corps for four years, Stubblefield toured the world, catching the travel bug and cultivating her mantra in life – “service beyond self.” She earned medals and a reputation as a leader – and was even asked to sit at the table with a commanding general to help devise strategies for halting sexual harassment and assault in the Marine Corps.

After her stint in the military, the rural Michigan native was looking for a big-city experience. She liked the idea of living in the Mile High City and enrolled at CU Denver, where she quickly developed a passion for public health.

Finding a calling in human rights

Feeding her hunger for travel, Stubblefield studied abroad in Singapore during her undergraduate senior year, which inspired her focus on human trafficking.

“While I was in Singapore, a woman in my host family was a police officer,” Stubblefield said. “She spoke of a suicide she was called to investigate.”

Stubblefield learned that many poor women from neighboring countries immigrate to Singapore to seek work as house servants. Lacking the opportunity to gain full citizenship, the immigrants often end up leading a life of hardship, and subsequently, the suicide rate is relatively high in the population.

“When she spoke of the death, there was no empathy, no compassion, and seemingly no reason; it was just normal,” Stubblefield said. “I was just blown away at this. How could this persist?”

“Our work serves as a regional resource of trauma-informed protocols, training and other resources for healthcare providers who care for victims and survivors of human trafficking,” she said.

Stubblefield hopes to fill a research void in the area, where she said few evidence-based studies have been done. “The majority of efforts are focused on assisting survivors after the fact. I felt like I needed to step up and focus on prevention. Unfortunately, you can’t take human trafficking 101. There’s a lot still to be learned on this front.”

Stubblefield’s impulses to help people only grew when she joined the CU Anschutz Medical Campus. In June 2019, she founded the Student Veteran Association (SVA) at CU Anschutz after noticing a need for connecting the student population with resources.

Given CU Anschutz’s rich connection to the military, dating back a century when the U.S. Army opened Fitzsimons General Hospital in Aurora, Stubblefield said it’s only natural for the campus to do all it can to support military-connected students.

“I wanted to elevate the visibility of student veterans on campus – about 250 of us – educate institution leadership, and honor the strong military history of our campus,” she said. “I’ve worked to connect my fellow military-connected students to relevant resources, answer questions and provide contacts to reliable organizations,” she said. 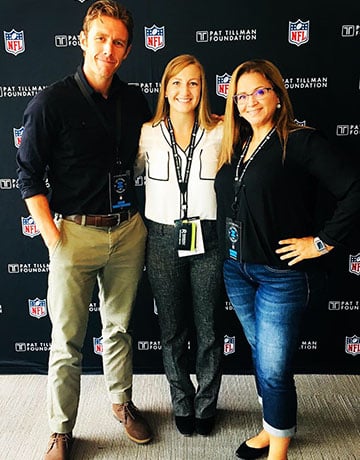 Jessica Stubblefield, center, after being named a Pat Tillman

Scholar in 2019. She is pictured with fellow Scholars

Stubblefield has also honed her research skills and grown as a human-rights advocate as a graduate student researcher at The Kempe Center for the Prevention and Treatment of Child Abuse and Neglect.

There, she has worked with Professor John Fluke, Assistant Professor Rebecca Orsi and a team at Washington University in St. Louis, investigating reports and foster care experiences of children on a national level from 2002-2017.

Carrying on the Tillman legacy

All of her experiences at CU and beyond, especially becoming a Tillman Scholar, have shaped her tremendously, Stubblefield said. The scholarship is named after Pat Tillman, who left a successful NFL career to join the Army Rangers, serving several tours before being killed in the line of duty.

“To me, being a Scholar is the highest form of recognition.” she said. “I am indebted to the foundation and am incredibly honored that I get to be a Scholar and privileged to carry on Pat's legacy. My Scholar quote summarizes how I hope to honor his memory: ‘I will work tirelessly to end the forced labor and human trafficking of children.’”

Editor’s note: Debra Melani, science writer in the Office of Communications, contributed to this report.