In a dual-campus collaboration, researchers are developing an abiotic fuel cell that could collect electricity from a renewable source – blood glucose – and power implanted devices such as pacemakers, neurostimulators and prosthetic devices.

In a bioengineering lab below Children’s Hospital Colorado, sugar water burbles softly as it flows from a beaker into a breadbox-sized unit connected to wires. The setup is small and inauspicious, but the “power harvest” taking place offers huge potential for millions of people living with implanted devices, including pacemakers, neurostimulators and prosthetic devices.

Richard Weir, PhD, director of the Weir Biomechatronics Development Laboratory, associate research professor at the University of Colorado School of Medicine, and research career scientist at the Rocky Mountain Regional VA Medical Center, explains what he and Thomas DiSorbo, a PhD bioengineering student at CU Anschutz, are up to: “At the moment, we’re working with sugar water – glucose water at the concentration at which glucose is found in the blood. It’s the first steps to see what we can extract, electricity-wise, out of such a system.”

The system is a type of fuel cell that generates electricity from glucose – a renewable power source that flows incessantly through the bloodstream. Weir and DiSorbo collaborated on creating a biocompatible fuel cell with John Pellegrino, PhD, and Jacob Segil, PhD, both mechanical engineering research professors at CU Boulder. The collaborative group’s preliminary work was published in the Journal of Power Sources last summer.

Traditionally, DiSorbo said, enzymes were used in glucose-consuming fuel cells to facilitate electricity generation, but the proteins have a short shelf life.

“Recent developments in catalysts and membrane technologies have allowed us to generate enough power to be relevant from an abiotic perspective,” DiSorbo said. “When we can use an entirely abiotic fuel cell, it’s just going to last a lot longer. This is exciting because we’re trying to get the fuel cells up to where they can generate power to a point of relevancy” and long-term usefulness for people relying on electricity to operate their implanted devices.

Standard batteries face limitations: Lithium-ion batteries contain materials that are toxic if leaked into the body, and they have a finite lifespan unless implanted in an area conducive for wireless recharging. However, inductive charging is a time-consuming process. Also, when batteries run out of power in devices such as pacemakers, replacement surgeries are expensive and potentially dangerous.

So, the ultimate goal of this dual-campus collaboration is to eliminate the current battery limitations by creating a device that extracts a reliably strong electrical current from blood glucose. By doing so, it could potentially extend a battery’s lifetime indefinitely.

“Somebody who undergoes surgery to replace a pacemaker battery maybe doesn’t need that anymore because, with this, you’re just charging it all the time from your blood,” Weir said. “There are interesting broader possibilities, even beyond being an internal power source. There are some broader platforms and applications on the medical side.”

One such possibility: using the fuel cell to siphon off glucose in the blood, which would allow people with diabetes to better modulate their blood sugar, he said.

‘Magic is the membrane’

So, how does the mechanism in the lab harvest power from the glucose? It’s a complicated process, but the “magic is the membrane,” Weir said. The membrane, fine-tuned by Pellegrino’s lab, is sandwiched by carbon-fiber cloth covered with a thin layer of platinum dust. This platinum is the catalyst material that drives the chemical reactions: oxidation of glucose on one side and reduction of water and oxygen to hydroxide ions on the other.

“The membrane is selective to ions like hydroxide. It lets us create a charge imbalance that we use to shunt electricity,” Disorbo said. Weir added, “The electrons come off and as they move through the wires and through our electrical components, they are powering a device.”

Up next: testing with biological fluids

Their work involves exploring the best membrane parameters and optimizing the membrane for blood glucose and pH levels found in the body. Next, the fuel cell will be rolled into a compact unit – about the size of two double-A batteries – and tested with biological fluids to see how much power can be harvested. The fluids would likely be cow or pig blood.

“When we start looking at real blood and the issues involved – clotting and the active attack of a foreign body by the body’s defense mechanisms – then we get into a world of pain,” Weir said with a chuckle.

One advantage with the researchers’ current setup is that the pump being used for the sugar water testing accurately mimics the body’s blood flow rate and doesn’t damage blood platelets.

Much of the work performed in Weir’s lab is focused on advancing the technology used in prosthetic devices. Weir’s interest in the field is tied to coming from a family of medical and engineering professionals. Also, his twin sister lost a hand in a lawn-mower accident at age 5.

He’s never shied from diving into some of the most challenging areas of bioengineering: creating neural and muscle interfaces that drive sophisticated prosthetic devices that offer unprecedented range of movement.

The abiotic fuel cell project, funded by a U.S. Department of Veterans Affairs grant, likewise pushes the boundaries of the current standard of device operation.

While many challenges lay ahead to make the power-harvesting fuel cell safe and optimized for human use, “there are some interesting possibilities down the road,” Weir said.

Photo at top: Richard Weir, PhD, and Thomas DiSorbo, a PhD bioengineering student, in their lab at Children's Hospital Colorado. 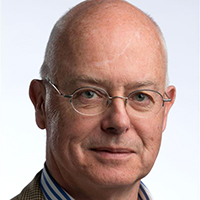