Dylan Johnson was on a roll during his senior season as captain of the Denver University lacrosse team. The Pioneers were ranked No. 8 nationally and Johnson, a surefire top pick in the upcoming Major League Lacrosse draft, was having his best college season yet.

Then, with vaunted Notre Dame looming in the sixth game last spring, everything stopped. During a practice, Dylan was running full speed when he suddenly tried to sidestep a teammate. 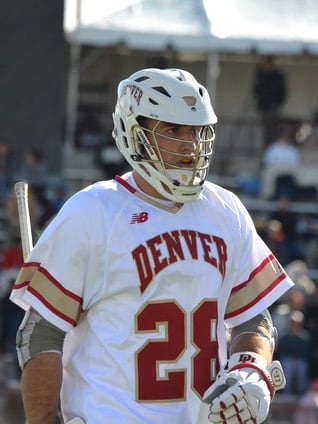 Last spring, Dylan Johnson was having the best season of his collegiate career until he blew out his ACL.

“I clipped my foot on another player trying to avoid a collision,” he said. “It turned me a weird way and (my knee) kind of gave out. I heard a pop and knew right away something was wrong.”

In an instant, the left knee of the Pioneers’ leader gave out. A complete tear of the ACL.

“I was supposed to be part of the MLL draft, and then everyone found out about my injury … I wasn’t in the draft anymore,” Dylan said.

But worries about a dashed professional career didn’t last long. On the sidelines stood Eric McCarty, MD, head orthopedic team physician for DU athletics and chief of sports medicine and shoulder surgery at the CU School of Medicine.

“He’d followed my career in college and had been at most of my games,” Dylan said. “Dr. McCarty was great – he told me all the options for surgery. He was pretty encouraging, saying ‘You’ll be able to play again.’”

McCarty operated on the knee on March 22, 2019, at UCHealth Broomfield Hospital, using a hamstring graft to repair Dylan’s ACL. Dylan was fortunate in that his meniscus, the cartilage cushioning the shin and thigh bones, only required a slight trim.

McCarty knows something about sitting out a year in your beloved sport. In the mid-80s, as a new recruit on the CU Buffaloes football team, the former Boulder High School star suffered a medial collateral ligament injury to his knee, requiring surgery and ending his freshman season.

“That’s always devastating to collegiate athletes,” McCarty said. “I get how hard it is to have an injury and lose that year and have a lot of doubts about whether you’ll come back. A lot of work has to be done, and that’s what Dylan is doing to get back.”

Eric McCarty, MD, knows something about being a standout collegiate athlete and suffering a major injury.

Dylan said he felt very little pain post-surgery, even after the nerve block wore off. McCarty said that has a lot to do with surgical technique – “we try to use finesse instead of brute force and be good to the tissues” – but it’s also reflective of the patient. Dylan clearly has a high pain threshold.

And a powerful drive to excel.

Shortly after graduating from DU, Dylan launched into a rehabilitation program with Mike Allen, PT, ATC, director of rehabilitation services for UCHealth’s South Metro region. He started his regimen at UCHealth’s Belleview and I-25 location, but moved to the comprehensive UCHealth Steadman Hawkins Physical Therapy and Rehabilitation Clinic when it opened in June.

Preparing for draft at premier clinic

McCarty and Allen approach their work not only as physical care providers but also cheerleaders.

“It takes the encouragement from your physical therapists, doctors and all the people around you. It’s a part of what we do,” said McCarty, who is also an associate professor of orthopedics and head team physician for the CU Buffaloes and the Colorado Avalanche.

“Everything we’ve been doing with Dylan has been toward preparing him for that (pro) tryout,” said Allen.

“There’s that collaboration where you’re side by side in the same facility that’s kind of lost if you have somebody who’s off-site,” Allen said. Working in tandem with his speed trainer has “helped drive and motivate Dylan to keep pushing forward, knowing that it was a team working together to get him back on the field.”

Dylan Johnson after his surgery in spring 2019. He said he felt very little pain post-surgery.

Helping his brother through a football injury

As Dylan chases his goal of entering the pro draft this spring, he’s helping his younger brother Dustin cope with his own adversity. Dustin plays football for CU. Just weeks after Dylan’s ACL blowout, Dustin injured his back during preseason camp with the Buffs, also requiring surgery.

“It’s been good talking with him,” Dylan said. “When someone’s having a bad day, or a good day, it’s nice that we’ve been able to communicate with each other.”

Dylan said he’s feeling stronger than ever and is ready to move to the next level in his lacrosse career. It’s a different world from when McCarty suffered his football injury in the mid-80s.

A new world for injured athletes

“Back then, you were in a cast for two months,” said the orthopedic surgeon, who graduated from the CU School of Medicine in 1993. “Now, you start therapy literally the next day. Athletes start to move their leg right after surgery. It’s really advanced quite a bit.”

So, it’s a strong bet Johnson will be suiting up in the Premier Lacrosse League this spring. It’s a new league, offering hope for a fresh start for the elite athlete who became a lacrosse standout at Cherry Creek High School.

“It’s always been a goal to play professionally and, having my senior season (at DU) cut short, I have a lot left to play and prove,” Dylan said. “My goal now is to get back to playing and making one of those teams.”